Visiting the Snow of Quebec 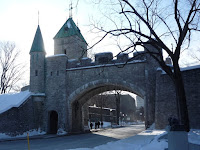 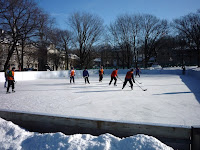 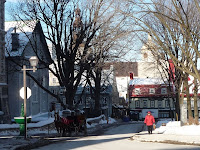 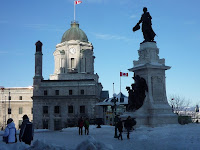 [Maryanne]While much of the USA and UK are suffering from unusual snow and cold levels, we've been in Arizona and enjoying sunny skies and pretty comfortable temperatures. Enough of that, we needed to share the pain, and visit a snowier climate.

[Kyle]When I went to work after our weekend in Sedona, Maryanne joined me for a long layover in Quebec City.

Even though it was around 10°F (About -12°C) when we were there, Québécois were out with us in large numbers for the sunny day. We walked into the old city and marveled at both the beautiful architecture and the long views of the frozen St. Lawrence Seaway. Quebec is a real jewel of a city. It successfully pulls off being both majestic and intimate at the same time. It feels like an old-world European city with its meandering avenues of stone and its tiny shop fronts set between massive cathedrals, grand hotels and government buildings.

We saw people leaving a hotel with cross country skis slung over their shoulders who were headed to a nearby park. Others ice skated around a rink in front of one of the massive gates in the city wall. At another, a lunchtime ice hockey game was being played. We eventually made our way to the toboggan hill, where $2.50 got us each a trip down after dragging the toboggan up to the top. Boy, that was fun! The wind chill on the way down was a bit much for my bare fingers, but it was worth it. 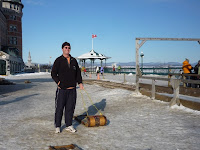 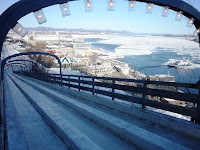 Toboggan Ride - fast and fun (and cold)
Shortly after that, our poor camera decided it was way too cold to work as well, which was pretty good timing as we needed to get back to the hotel anyway for the trip back to the airport.
Posted by SV-Footprint at 4:58:00 PM 1 comment:

Email ThisBlogThis!Share to TwitterShare to FacebookShare to Pinterest
Labels: Off Boat Side Trips

Out and About in Arizona

[Kyle]Maryanne and I decided to spend a long weekend exploring a little further afield in Arizona, so we rented a car and drove up to Sedona.

First, the car. Those who have been following the blog for a while know that we have a preference for small, super fuel efficient cars. Rental car companies, particularly in the U.S., seem confused when we don’t leap at an offer for a free “upgrade” to a bigger car. After all, we live on a boat that has something like a mere 150 square feet of living space. Neither of us sees the point in dragging around more car than we absolutely need to get the job done. Well, you could imagine my glee when, at the Phoenix airport, the rent-a-car guy offered me an even smaller car than the one I had reserved for the same price. Based on his reaction, I surmised that most people took one look at the car and laughed at him. He seemed shocked when I jumped on his offer to take a Smart car for the weekend.

Up until now, the smallest car that we have been able to get our hands on was the Ford Ka in Oban. As far as we were concerned, the Ka was still too much car. After all, it still had a tiny, vestibular back seat on which the four unnecessary cubic feet of air we carried everywhere had to sit. The Smart car has no such wasted space. The cargo area sits on top of the engine in a two and a half foot extension behind the two seats. 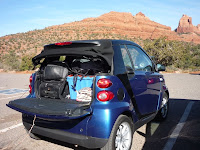 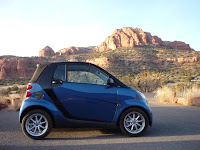 Kyle was very proud of our rental - a Smart Car that amazingly managed to fit in all our gear.
I admit that, from the outside, the Smart car is hilariously tiny. It looks like the front half of a regular car with the hood chopped off then lowered onto four tiny go-cart wheels. From inside, though, the car is totally cool. We kept forgetting we were not in a normal sized car. There was plenty of leg and head room and the car had lots of cool features that we didn’t expect like power windows and mirrors, air conditioning, paddle shift or automatic transmission and, my favorite, a button on the dash that will fix a flat tire with a built in air pump. In fact, every time the car is started, the pump automatically inflates the tires to the correct pressure. Ours even had an electric cabriolet top and it could be parked in the shade of any nearby mail box. The car didn’t have any problem with the 75mph speed limit on the freeway, even climbing over the passes on the way. It also has a five star crash rating. I loved that little car. I hated to return it. My only real disappointment was that our quest to rent ever smaller and smaller cars has likely reached its limit. The only car I can think of that is smaller is the diminutive Corbin Sparrow electric car. The problem is that particular car only has one seat, defeating the whole idea of spending time together. Plus, I don’t think anybody is renting them. 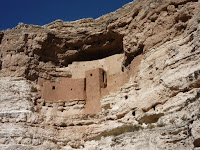 Montezuma's Castle - prehistoric cliff dwellings
On the way, we stopped at Montezuma’s Castle, the name given to a village of cliff dwellings carved high in a cliff. The trail in the park did not go up to the dwellings, but we were able to get up close for a look at a village that was occupied until about 800 years ago.

Once in Sedona, we spent very little time in our hotel. Since the gorgeous scenery beckoned so irresistibly, we spent every daylight hour hiking some of the trails in the area. Our main hike was an all-day walk up the long trail up to the top of Bear Mountain. From the car, which was parked in the back half of a space at the trailhead, we could see the trail as it headed across a short plain before zigzagging up a steep, red mesa to the top. Once on the trail ourselves, it didn’t take long before the flat plain gave way to a steep climb up rocks that were of such a size and spacing that the climb became like taking stairs two at a time. Every now and then, when we needed a rest, we would turn away from the mountain and take in magnificent views of the surrounding mountains that became more and more impressive the higher we climbed.

After a final push up the steepest part, we crested the top of the mesa and had a nice walk along the flat trail to the other side through cactus and Joshua trees. On the other side, expecting the trail to end at a viewpoint, we instead found the trail continuing up the next steep hill, which had not been visible behind the mesa when we started. We were pretty tired, but we figured we’d come this far, we couldn’t quit now. At the top of that hill, the trail still did not end but instead continued steeply up yet a third hill over loose rock. Alright, Fine! We’ll climb that one too!

We were rewarded with the most stunning views of the entire valley. We sat on a cliff edge and enjoyed the view while eating our hard-earned pack lunch. Then it was time for the much easier descent back down to the car, picking our footfalls carefully as we made our way back down the mountains, happy with our day of stunning beauty and feeling the satisfaction that comes from a day of straining muscles and fresh air.

On the day we left, we hiked the much more moderate loop around Bell Rock, capped with a climb up the rock itself. That climb started off normally enough but, higher up, became quite treacherous. There is a band of Bell Rock where there are no real trails and it was necessary to climb the face of the bare, steeply sloped rock. At this point, the only thing protecting against a long fall is pure shoe traction right at its limit. It was necessary to carefully scan the rock face for those pockets that were slightly less steep and then figure out how to link enough of them together to get to the top, all the while knowing that if I got it wrong, there was nothing to stop me until the bottom. I don’t recommend it without good shoes, plenty of time to take it slowly and nerves of steel. Maryanne sensibly opted out before the insane part.

I eventually made it as high as I could before I would have wanted proper climbing equipment to continue. Other people had apparently been able to get higher while free climbing, but I thought the risk was excessive. From my perch just over halfway up, I was rewarded with an incredible view. Oh, what I’ll do for a view! 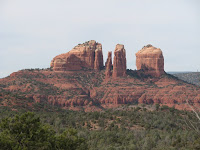 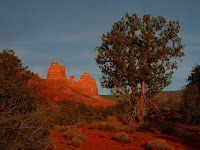 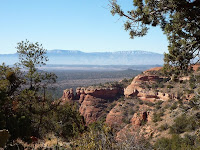 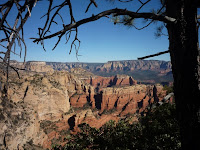 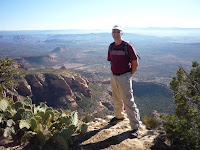 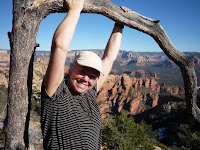 Random views of beautiful Sedona and it's stunning Red rocks
Posted by SV-Footprint at 3:29:00 PM 1 comment: