[Maryanne]Firstly - my apologies for this late post... Kyle gave it to me ages ago but I've been too busy to get it up on the blog... Oops!

Secondly - for those in the USA, Boxing day is a UK holiday, and the day after Christmas Day. I've not real knowledge of why it's called boxing day but there are a number of theories you can check out. Most involve money in boxes given for services over the year from the rich to their staff/servants or other lowly service providers.

For me it means an extra day's holiday from work.

[Kyle]Since Maryanne was unsuccessful at killing me on our Christmas Day hike, she checked that our insurance was paid up and then took us back to the Lake District for another day’s hiking in the freezing cold. This time, we went a bit further north to Ullswater and in particular Gowbarrow Fell and the local waterfalls of Aira Force and High Force. {Maryanne: For those of a literary nature - Aira Force is mentioned in no less than three William Wordsworth poems}

The trail we chose started by running alongside a stream (Aira Beck) that had frozen into cathedrals of ice at every cascade. In a couple of spots, the trail froze into a slightly canted slab of ice that was completely un-scalable, forcing us to claw our way through the bushes to the side in order to get past {think comedy moments!}. 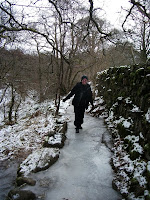 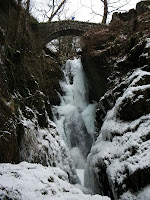 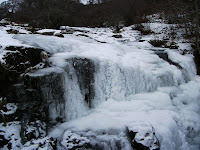 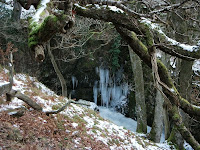 At 65' max, they may not be the most impressive of waterfalls in the world, but they provided a frozen kingdom for us to explore and an excuse to venture out on a rare day away from jobs of any sort!
After the last waterfall, the trail turned and climbed steeply to the summit of Gowbarrow Fell. The wind had picked up from the day before and ominous clouds were moving in. It seemed so much colder than the day before, but the views were beautiful from up there.

From the summit, we turned into the freezing wind and descended the snow covered trail. For some reason, it seemed the trail had a lot more down than up. We spent ages descending at the very limits of traction expecting to fall and start a long slide at any moment.

We managed to make it all of the way down to the last set of steps before the parking lot when my feet came out from under me and I landed with all of my weight on my right elbow. Ow! It swelled up a bit for a while, but I’m fine. Mostly I was just frustrated that I got so close to having a successful hike when it happened. 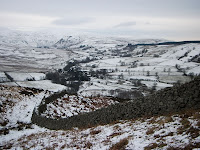 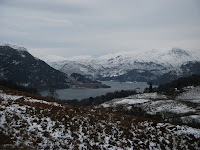 Views from the Fells and down to Ullswater
We treated ourselves to a nice pub meal on the way home, including a giant chocolate dessert. Not a bad day at all!

When we got home, I checked the flights to work and was horrified to find that all of the flights had been cancelled for two days because of the blizzard in the northeast USA, just the reverse of the British one that had kept me from getting home for three days. Now the flights were all hopelessly overbooked and my only hope for getting to work was to leave early the next day, three days early. I was actually lucky enough to get the last seat out the first day, actually sat on the plane, when they cancelled that flight out from under us. It made for a completely wasted day of sitting around at the airport. By the time we got home, it was already time to get to sleep so we could get up in time to try for the next day’s flights.

After another long kerfuffle, I managed to make it to EWR. I am definitely one of the lucky ones. At the moment, I’m looking at a lot of snow from a hotel full of people who will be stuck here for days. Tomorrow, I start trying to get some of them where they’re trying to go.

[Maryanne]While Kyle has been holed up in a hotel in Newark, and busy working since Christmas, I've been travelling about the UK visiting with friends and family - 900 miles of rental car driving. I managed to see all my nephews and my niece, and catch up with most of my family. Exactly what I returned to the UK to spend more time doing - so I was happy. The focus was obviously family, but I also managed to stop by and see our friends from Cirrus Cat in Yeoville, Summerset. Thanks to everyone that fed me, and entertained me over this last week. :-) 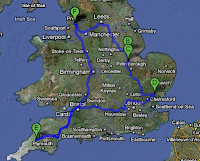 Approximate route taking me 900miles around England - provided by Google Maps
Posted by SV-Footprint at 4:02:00 PM No comments: