The Basin to Quahog Bay 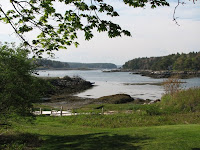 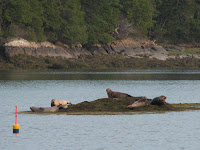 [Kyle] After leaving the Basin, we had planned to go to the little harbor at Sebasco, just a little bit south. when we came out of our sheltered inlet, however, we were hit with a strong headwind and heavy chop. We bashed our way down to Sebasco and found the harbor so crowded with lobster pots and moorings that it would have been tough to squeeze an anchor in. Also it was exposed to the predicted wind and the chop would have been uncomfortable to anchor the night. We decided to move on to the next planned anchorage in Quahog Bay.

We had an additional problem! Our fresh water supply that we had filled in the expensive Nantucket marina was bad, it had huge globules of white particulate floating around! So I had dumped all the fresh water, expecting to fill that day. Sebasco Harbor Resort had a dock with services that appeared to be closed so we turned around and headed up river to Cundy Harbor (almost all the way back to where we started), but found the marinas there either closed (too early in the season) or without water. We then headed back to Sebasco and wandered into the empty restaurant - and asked a surprised looking fellow where we could get service at the dock? He called around and eventually sent us to the front desk. At the reception they could not find any help (season still not started, all the staff are on short hours), but were kind enough to tell us to go ahead and use any spigot (tap) we can find.

On the way back to the boat we took a leisurely tour of the resort, it is full of really pretty waterfront views - so naturally we took pictures; what a great place to vacation in Maine! Once we got back to the dock, we found water, but the supply was turned off. I worked my way up the line, turning on valves but the mains at the building source was turned off, so still no water. We were just resigning ourselves to having to carry jugs of water to and from the restaurant, when a caretaker turned up and offered to turn on the water for us.. EXCELLENT. We then decided to flush the bad water out of the tank before refilling. Just about half way through flushing the bad water out, pressure stopped and a leak appeared at the top of the dock spraying water everywhere. By then of course the caretaker had left, and we were worried we would still have no water. Maryanne shut off the valve to stop the water flow, and I identified the problem (by hanging upside down under the dock) a connection in the dock line was missing a hose clamp and had blown apart. Maryanne went to the boat and found the right size hose clamp from our spares, and I installed it (still hanging upside down), fixing the resort hose. We filled our tanks and were VERY grateful.

The trip from Sebasco to Snow Island was (of course) beautiful (no really!). The problem with Maine is that it is so pretty everywhere it is hard to find a spot to like best. As we rounded the corner into our anchorage we were amongst dozens of little islands sprinkled throughout the bay, some of which had seals enjoying a rest. We managed to anchor in a tiny little spot between island that just had enough room for Footprint to swing.

[Maryanne]In Quahog bay we had intended to anchor at Snow Island, but a tip from our trusty Maine cruising guide book suggested we poke around a little more. The tide was low, so there were Islands and rocks everywhere - any route from A to B could be taken via any number of these rocks and islands... We eventually anchored by Ben Island.. Pretty, pretty, pretty - to get a view try these coordinates in Google/mapquest 43 49.2'N 069 54.2'W.
Posted by SV-Footprint at 6:48:00 PM