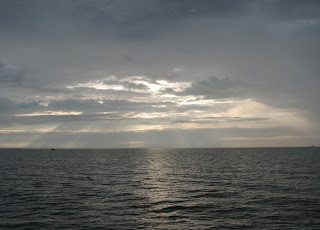 [Kyle] Our next morning leaving Fisher's Island we had to get up really early. We left at 4 a.m. There was a little bit of wind and we had a strong current helping us along. We also, not surprisingly, had the whole place to ourselves, at least for a while. It rained off and on all day but we never did see any appreciable wind. We had so much help from the current that at the end of the 22 mile trip, our knot meter said that we had only gone through 12 miles of water to get there.

We arrived at Duck Island, CT just as the current started to change and then increase. With a speed of 50 feet per minute (that was our real speed) we crept up on a good spot and dropped the anchor. I was so pleased. We managed to sail the entire day without starting the engine. I had my doubts during that nail biting last part.

Maryanne wasn't so happy. From up at the bow, she could see that our trip line had become tangled in our rode and prudently wanted to pull the whole mess up and start all over. As she was untangling, I was trying in vain to get the sails to bite and get the boat moving and under control before we were carried by the current into the boat behind us or blown by the wind into the breakwater. Eventually, I had to start the engine to keep things from getting worse. I was so disappointed. The streak had been broken. Oh, well. You gotta do what you gotta do.

Duck Island is really just a clump of dirt and trees with long breakwaters extending away to the north and west. It was Labor Day weekend officially now and the whole little island and anchorage was filled with people who, from the sounds of it, were enjoying their first beer.
Posted by SV-Footprint at 4:07:00 PM