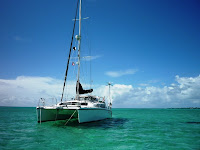 [Maryanne]Antigua and Barbuda were lumped together on independence from Britain. Just 30 miles of ocean separate them, but they are worlds apart. From the little I had read of Barbuda, I really wanted to go.. I used my wifely charm to finally convince Kyle to take us there. It was certainly worth it.

Of course, I had never heard of Barbuda a few months ago, now I am becoming an expert on Caribbean geography. Barbuda is NOT Bermuda (of the triangle fame) and nor is it Barbados (much further to the South East) - although all were (once, or still are) British colonies.

[Kyle]Almost everything we had read about Barbuda said things like "the last unspoiled Island in the Caribbean", or "real desert island". Only half the size of Antigua, but with just 2% of the population, there is reportedly vast areas of the island to explore that remain wilderness. It's 1400 residents have so far managed to avoid the enticements of developers, and the island remains simple, communal (no land ownership) and independent minded, even though it is tied with Antigua.

We got up very early, left Indian Creek in the dark (nerve racking, and thankful for our radar and previous plot of our route in) and immediately turned into the teeth of both the trade winds and the equatorial current - which made for a rather unpleasant three hours trying to get around the East side of Antigua (while trying to be gentle on our rig). Once we were clear of Antigua, we made good time the rest of the way to Barbuda. Unlike mountainous (well, hilly) Antigua, which can be seen from many (up to 50) miles away, Barbuda is low and flat country (125') - only becoming visible about 5 miles out. The entire island of Barbuda is surrounded by coral reefs, and every guidebook we had admonished against approaching the island in the dark or in poor lighting (now you realize why we left so early) - we wanted to enter the coral studded anchorage with the sun behind us and in good visibility. With Maryanne up on the bow she guided us through the passes and around the coral heads into 4.5' of water over white sand.

We found a spot as close to the beach as we dared (so the dingy row would be short), and marveled at our location - again we were the only boat anchored in sight, on the south of the island, protected by the reefs with a nice breeze (no bugs, plenty of electricity). The most AMAZING thing was the water; it really is the colour portrayed in the magazines - like the sky turned upside down, the boat floating above it just 5' (or so) above the surface. We could see our anchor chain stretching away from the bow and disappearing into the sand ahead of us. The water just screamed "Jump in!" and with much haste we broke out the snorkel gear and swam to the nearby coral patch to explore. We were told later that tropical storms had destroyed much of the reef - this was evident in the many large broken corals covered with sand, but even so, the sea life was much more varied and interesting than it had been at Indian Creek. We spent the rest of the day hovering over schools of angel fish, watching timid parrot fish guarding their caves; puffer and box fish; and so many more. The whole thing was fascinating to float over and watch. Eventually the sun moved low in the sky and we returned to Footprint, where we realized we hadn't eaten since breakfast! That was soon rectified!

The night was magnificent. There were no lights ashore and the only signs of human habitation apart from the distant glow of Antigua was a lonely street lamp about 5 miles away. The stars were brilliant, there was a nice bug free breeze to keep us cool (and batteries charged) and in the background, the soothing sound of the surf.
Posted by SV-Footprint at 6:54:00 PM

NOW I think you have arrived in Paradise. Bravo!