Devil's Bridge and Beyond!

[Kyle]After spending 19 days away from my beloved wife and my beloved home, mostly at work but some time with family and friends, I returned for a whirlwind tour of Antigua.

Since I was only to be home for two days and therefore the per day-off cost of a cab to the airport was rather high, Maryanne decided that it would only cost us a little extra to rent a car for the period. This would allow us a little more time together during the short break, would allow Maryanne to run some “heavy” errands, but mostly would allow us to see some of the rest of the island that we have been calling home for the last two months before it’s time to leave.

[Maryanne]This was to be Kyle's last chance to spend any real time in Antigua, and I felt we had not done it justice by sticking with the sights and sounds within easy walking (or bus) trips from English Harbour. There were plenty of other places in the tourist guides I figured we should make the effort to see. I rented a small Jeep (the cheapest vehicle) from Big's Rental (very Soprano's) and en route to the airport stopped to check out a real supermarket (up to now, the stores I've been shopping in have stocked little more than a good UK/US petrol/gas station, so the prospect of a REAL supermarket was quite exciting, the Epicurean didn't let me down)

Antigua airport (ANU) is pretty basic, a single building with a few market stand type stores and a basic restaurant. HOWEVER the airport sits in the most beautiful grounds, complete with spas, restaurants, cricket pitch, and delightful gardens - so I wiled away some time climbing and enjoying the views from the observation tower.

[Kyle]My flight landed in the afternoon and Maryanne met me at the airport ready to hit the ground running. She wanted to get as much done as we could before the sun set and we lost the light, which happens fast in the tropics. Our first stop was Devil's bridge, a natural archway made by seas pounding the cliffs on the northeast side of the island. To be honest, it didn’t seem all that impressive. The bridge itself was only maybe 12 feet above the water, but apparently Devil's bridge is the best example of a sea bridge on Antigua. The waves crashing through it, however, made for a nice spectacle with plenty of churning water being accelerated into jets of spray flying everywhere. I even got Maryanne to stand in the path of one for a picture, which ultimately failed because there was too much water and not enough Maryanne in the picture. She has lately become so laid back with her Caribbean lifestyle that she took it in great stride and shrugged it off with good humor, even though she was soaked on one side. Almost nothing phases her anymore.

Kyle positions Maryanne to pose for photo - and get wet!

Devil's bridge does have a sad history. Apparently, it was a chosen place of escaped slaves who had decided the only escape was to commit suicide. The fall itself would, of course, be survivable, but there would be no way to avoid being crushed to pieces by the churning sea on the sharp rocks within seconds. Even if the slaves had somehow learned to swim, it would not have helped. 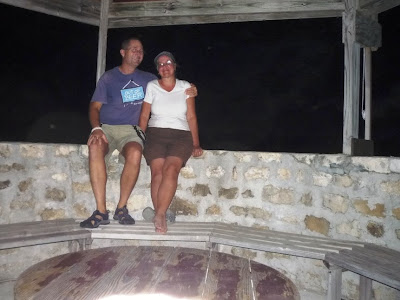 Enjoying the view... from atop the windmill of Harmony Hall

With only about a half hour until sunset, we decided to make a run for Harmony Hall. Harmony Hall is a picturesque resort in the grounds and buildings of a converted sugar plantation that sits nestled on a cove just to the South of Devil’s Bridge. My tour guide, Maryanne, described it as a place where we would never be able to afford a meal, but thought it would be a nice place to have a glass of wine while watching the sunset. She was absolutely correct about that. The place was lovely but understated. The architecture reminded me of Santa Fe, New Mexico or Sedona, Arizona. There was a deck with table overlooking the bay and some of the smaller islands farther off and the property was dominated by the remains of an old stone windmill of the type found all over the island.

Unfortunately, we were no match for the Antiguan roads. Even though we only had to go a short distance, there was no way we could have made it in time. We got there just after dusk. We had a quick dash around in the twilight and by the time we made it over to a table, there was nothing but a black void to look into, so we decided to skip the drink and return home to a nice pasta dinner aboard Footprint.

[Maryanne]I loved Harmony Hall, it's very remote (by road) there are only two villas set aside for guests, and the restaurant is only open for lunch. The old windmill once used for crushing sugar cane is now the home to a very posh yacht club, and although open to the elements is filled with trophies and photos - pretty cool.

Due to Kyle's delayed arrival we also missed seeing from my scheduled tour the restored sugar plantation of Betty's Hope
Posted by SV-Footprint at 6:20:00 PM