[Kyle]The day was planned as a long day. We needed to sail around to the other side of Jost Van Dyke to clear out and then head over to St John in the US Virgin Islands to clear in.

Once morning arrived, we found our squid friends still living beneath the boat and the rudders. Concerned about chopping them up with the propeller, we decided to sail off the anchorage. Unfortunately, since the anchorage is deep, we had about 250 feet of rode to pull in with our manual windless against a fairly strong headwind. It was sweaty work but eventually we got the anchor aboard and the boat headed downwind to our next stop. On the south side of Jost Van Dyke, we found the customs dock full, so we had to anchor and setup the dinghy to row ashore to Customs (an unwanted addition of time). Once ashore we both exchanged a look, we were not looking forward to this, Jost Van Dyke is where we had found really rude customs and immigration previously. We practiced our best smiles, and went inside. Here we were greeted by 3 new (to us) officials – all friendly. They offered us the forms we needed without attitude. The immigration man even offered a good afternoon without provocation from us :-). That’s more like it. In true BVI fashion, however, we were told by the officials that Footprint was not allowed to stay in the country for more than 30 days total (not concurrent) in a year, without paying the $200 temporary importation fee. Also, we were told that despite Maryanne's legitimate visa extension, she had stayed too long and on return would only get a 1 day stamp in her passport. She would then be expected to report to immigration in Road Town for another official extension. Every time we’ve been to customs and immigration we’ve been given a different version on the regulations regarding our stay. We’ve always been honest about our intent. Since we were not planning to clear back in at the same port, and thus suspected we would get yet another version of the story, we just smiled and said thank you for the information.

Having successfully cleared out of the BVI, we rushed back to the boat, stowed the dinghy, pulled up the anchor, and headed for St John, USVI. It was a beautiful day for sailing in warm, nearly cloudless skies across the straight to the island of St John. We had 360 degree views of the tall green islands We had flat seas. It just does not get any better than this. Maryanne even read aloud to me from our latest book. The customs dock was again occupied, but we waited about 30 minutes for it to free up. Once inside, we quickly cleared in and out for the following day. The officers were very nice as in our previous visit – easy. After that we stopped for much needed water (we were down to about 8 L in our tanks… very very low). Finally we anchored in the small Cruz Bay harbor and were able to anchor in about 2.5 feet of water with about 25’ of chain, we LOVE our shallow draft whenever we find an otherwise busy anchorage.

Maryanne was concerned about getting to the post office before they closed, and we were uncertain what time that might be, so we did a super fast “done sailing” checklist and rowed ashore to find the post office. We had arranged for a delivery via “General Delivery”, and when we found the post office it was waiting for us – huge relief. The post office staff were also very nice. We obtained a map of the island and town from a friendly guy in a tourist office booth, and since we still had a few hours of daylight left, we decided to find a hike/trail to explore (The US Virgin Islands, and St John in particular is around 80% national park). The (again, very friendly) people at the National Park office suggested a 1 hour each way walk to the nearby Honeymoon Beach. It was a nice hike, with good trails and plenty of shade as well as occasional views of the islands and bays – although it was also hot. 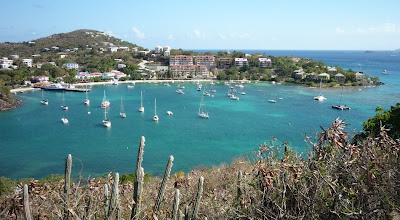 We eventually exited the trail at honeymoon Beach, which was a typical Caribbean beach of soft white sand and palm trees with views of St Thomas in the distance across Pillsbury Sound. Maryanne, in typical explorer fashion, was eager to see what was around the next corner, so we joined the dirt road slightly inland and discovered Caneel Bay (a very swanky resort, way out of our budget). We ambled around and enjoyed the expensive views. We were hot and thirsty, and had hoped to find a small store to purchase a soda for the walk back, but no luck. The only way to get a soda in the resort seemed to be to order one and have it delivered from the bar by a waiter with a napkin draped over one arm. In the search for the soda, we did find some lovely old ruins of a sugar mill converted into a beautiful restaurant with stunning views. We were tempted to stay until I saw the prices on the menu. We hit the trail back to Cruz Bay. 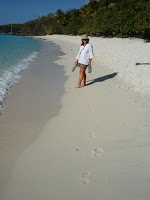 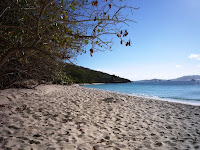 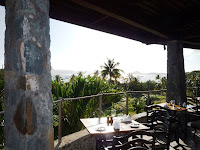 I’d seen a Mexican restaurant called Margaritas in Cruz Bay and this kept me going through the long hot walk back. Once off the trail, we popped into said restaurant and I ordered a grande margarita. I was shocked when I was delivered a glass the size of my head (unfortunately with very little alcohol). The food was delicious, although expensive. 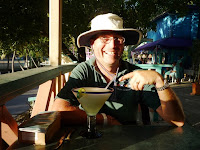 Kyle is excited to receive his giant Margarita

[Maryanne] Margaritas was a tatty back street restaurant where the menus were food stained and ripped. I wasn’t so keen to eat there but at least expected a reasonably priced meal out. No such luck; beers (unpriced in the menu, were $7 each – we’ve been paying $4 in much more remote and less inhabited islands) and the dishes were about twice the price we’d expected. The waiter was way too smarmy for my liking, but even I’ll admit the food was really really delicious. Having enjoyed our food, we decided to try a different bar for after dinner drinks.

[Kyle] We found a place on the waterfront with a view of Footprint and asked Dan the bartender if we could have a frozen mudslide – he persuaded us to take one of his similar specials which unfortunately we can’t remember the name of, but it was so delicious we had two each. He shared with us that the virgin version of the drink we so enjoyed would be just chocolate and ice – that was a lot of alcohol for only $7 a drink. No wonder we can’t recall the name of the bar or the drink.
Posted by SV-Footprint at 2:26:00 PM

You are living up to your name being so careful to avoid injuring or even impacting the coral and other sea life. Leaving almost no footprint--I'm so proud of you both and wish I could join you at that expensive, resort hotel!

A Chocolate Bushwacker - that's what it was :-)