Finally, a Weekend Aboard and Together

[Kyle / Maryanne] So, after our working trip to Ottawa, Maryanne and I finally got a weekend in which to enjoy the newly refitted Begonia. At least this was the plan.

I arrived on the Friday evening at Richmond airport, Kyle collected me and we headed off to a Mexican restaurant that had been a regular haunt in the days when I collected Kyle from Richmond after a work trip (when he could not fly into Norfolk) way back when we lived in Virginia. Since this was to be our last weekend in Virginia for the foreseeable future it was a nice way to say farewell (and saved any late night cooking and cleaning up).

With a forecast for showers in the morning, we felt no guilt about sleeping in to our hearts’ content as the occasional shower passed over the boat. Just about Noon, the first patches of blue sky started peeking through and we cast off the lines for an afternoon sail followed by an evening anchored in a nearby bay. The weather was miserable, but Kyle was convinced it would break. He’d planned for a good test sail for me to see my new boat in action, followed by a romantic night at anchor, he hadn’t planned for the weather and I was all for giving up and staying at the dock. With an ear to the weather channels and the VHF and an eye on the radar, Kyle determined by mid afternoon that we could head out; I certainly was not so convinced. It was still blustery, and by the time we’d left the dock heavy rain returned, by the time we left the tributary there were emergency warnings of tornadoes and waterspouts – Yikes, if only that had been announced 30 minutes earlier I’d have insisted we stay at the dock.

Before we had even left Broad Creek, where our marina is located, it started raining. I mean RAINING. Lightning was everywhere and rain was bouncing off the deck and striking me in the eyeballs so hard, I had trouble seeing. Returning to the dock for an indoor weekend, while desirable, was suddenly a completely unsafe option. We were in the mariner’s position that seems counter-intuitive to non-sailors where our most safe option was open water away from all of the dangers of harbor.

As we continued out into the Rappahannock, things got even worse. They continued to get gradually worse for the next few hours. The radio was alive with warnings of severe thunderstorms and waterspouts.

It was uncomfortable and I was completely soaked outside at the helm, but Begonia was just fine and Maryanne was dry inside. It was a good thing.

Yes, poor Kyle was drenched, and I was occasionally supportive and decided to stay inside – no point in us both being miserable; teamwork doesn’t mean we both have to get wet and cold, I’d have a towel at the ready, my small contribution!

As we approached our anchorage, I had some concern as to whether or not we would still be safer in deep water. The weather and latest forecast all suggested the worst was very much over, however, so we gave it a shot.

By the time we had finished setting anchor, the skies were clearing again. The remainder of the evening was actually very pleasant. I tried, but Maryanne wasn’t buying that I planned it that way. Hmm, setting the anchor in the rain, and the prospect of an early start and a miserable sail (more like motor) back to the marina before a long drive home in the morning - not exactly the idyllic sailing weekend I’d imagined.

By morning, the crud was back and we had a pretty long slog back to the marina, where I dropped off Maryanne. The time had come for me to begin making my way north in Begonia. Maryanne was taking our rental car back to NJ.

She drove through horrid road conditions caused by the storms while Begonia and I got a good soaking crossing the Rappahannock.

By the time I got into Maryland, the rain finally died down a bit and I got a real wind for a fast sail to my first anchorage at Mill Creek in the Great Wicomico. This is one of my favorite anchorages in Chesapeake Bay. We have stayed here many times before. It was in fact the first anchorage where Maryanne and I anchored Footprint after we picked her up from the factory.

My evening in my favorite “quiet” anchorage was spent watching lightning shows and listening to thunderclaps. I took advantage of all of the free water with a combined outdoor shower and deck wash. 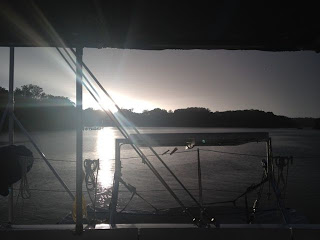 Finally some more reasonable weather
Posted by SV-Footprint at 5:52:00 PM

Email ThisBlogThis!Share to TwitterShare to FacebookShare to Pinterest
Labels: Chesapeake