Heading "Down East" from Portland

[Kyle]For once, the story of our next big sail didn’t start out with, “I came home, got two hours of sleep, then got up in the dark to leave.” This time, the tides and forecast were such that I could sleep as much as I needed to, then get ready to leave.

We had originally intended to sail directly from Portland to Bar Harbor, where the next available airport was for my commute to work. After a little more research of my ground options for getting to the airport, we switched our destination to Somes Harbor, at the top of the Somes Sound, the fjord bisecting Mt. Desert Island. This would make the trip to the airport within (long) walking distance, simplifying matters considerably.

The distance, tides and conditions were such that it made the most sense to do the passage as an overnight sail. During the dark part of the night, we would be in the open sea, where the density of lobster pot buoys was much lower; the inland waters of Maine are far too crowded with lobster pots to make navigating at night safe.

The wind forecast was for a twelve-hour window of tailwinds that were strong enough for the Weather Service to have issued a small craft advisory. I was actually a little concerned that we would still have too much speed, even over-reefed, and that we would need to heave to on the other end waiting for first light.

It didn’t turn out that way at all (surprise!). We left a little early with the thought that it wasn’t too bad of a day yet, and that the pre-window winds would actually help us head further offshore to the south giving us both a better wind angle during the strong winds, and reducing our chances of snagging a pot buoy. When the wind did finally shift, it was half-heartedly, both in direction and speed. What we ended up with was not strong tailwinds and breakneck speeds, but modest headwinds. We spent the whole night pinching as close as we could to the wind trying not to get set far enough north to need another tack south back away from the coast.

Even though going upwind in Begonia is a much smoother and faster affair than it was in Footprint, the lighter than forecast winds were really messing up our ETA forecast. Soon, our concern changed from getting there before daylight to making it there before dark. My hopes were buoyed by a brief couple of hours of 20kt winds as a cold front passed, but they quickly died back down again after bringing slashing rain and much colder air that I had to go out in to shake out the reefs. We lost more time by snagging three lobster pots in the night (in depths well over 300 feet). The first two floated free after we slowed to a stop, and then backed the sails to get going astern. The third was more obstinate, requiring quite a bit of prodding with a long boathook to free. Then it took us the longest time to get the sails to bite and get headway again. We would just get enough speed to bear off and catch the wind when a wave would slap us back.

Our ETA in Somes Harbor was now after midnight. Knowing lobster pots are even more prolific in shallower waters, we’d have no chance of avoiding them in the dark so we started looking for an overnight anchorage to which we could divert. After looking at a couple of the islands within reach at daylight, we settled on Lunt Harbor at Frenchboro on Long Island. The little harbor was reputedly packed with moorings for hire that were too numerous to allow anchoring. In spite of the fact that the Frenchboro and the island in general seemed to have a lot to offer, we knew we wouldn’t have time to do much other than sleep as we still had to be in Somes Harbor the next day so I could get my flight. Maryanne dug through our guidebook, which is mostly marina ads, and found a footnote about deserted Northeast Harbor on the other side of the island, which had the added benefit of being less out of our way, so we decided to head there. 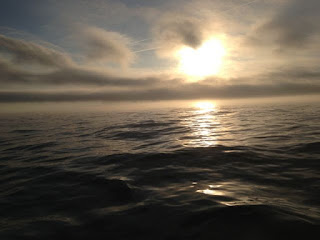 Sun setting at sea, just before the fog descended

About two miles from the island, we sailed from a thick haze with just a hint of sun shining through into proper Maine pea-soup fog. The sun, which we never really saw, set around then, making the visibility even less. The next half-hour was one of the most anxious I’ve had in a long time as we squinted into the darkening fog trying to pick out pot buoys. Without any visual references, our brains struggled to make sense of tiny changes in contrast. Every little wavelet looked like a float or some other obstruction. Often, we’d end up with the rudders hard over and watch one we’d spotted late just miss a prop. All of this was happening as we were feeling our way into with depth sounder, radar and echoes from our fog signal. There was a big, granite island only a few hundred feet away, but we could see no sign of it.

It was with great relief that we got the anchor holding in 10m of water, surrounded by a completely featureless horizon just as it got too dark to see without headlamps.

{Maryanne: Down-East is the quaint local term for the far north-eastern areas of the state of Maine. As the coastline progresses north, it curves east even more so; I've no idea how the 'down' part of down-east came to be, it just is!}