[Kyle]We’ve noticed that everybody has some superlative claim for their particular Fourth of July celebration. Boston has the largest one for a city of more than 500,000 people that is east of 70 degrees West longitude. New York has the tallest buildings for a background as well as the highest rate of patriotic muggings. Norfolk’s exceeds New York’s in gross tonnage. Baltimore’s is pretty cool. The Star Spangled Banner was written there by Francis Scott Key as he watched the original, which was much more shrapnel-ey than their current re-enactment.

Bristol, Rhode Island’s claim to fame is that theirs is the longest running celebration, with 2013 being the 228th consecutive year in a row. The Fourth of July celebrations here are a week long event with special events all day and a different band playing in the park every night, which can be heard all across the harbor.

One unusual thing is that Bristol has their big fireworks display on July third instead of the fourth. I don’t know how long it has been that way, but the more I thought about it, the more sense it made. My suspicion is that since Bristol is a giant harbor, it may be to save the whole place from having to get underway at night after a few too many drinks in time to return to work on the 5th. Instead, we all got to sleep in a little on the 4th before heading over to the big parade. {Maryanne: Also the neighbouring towns all seem to coordinate fireworks on different nights to enable us to visit more than one display!} 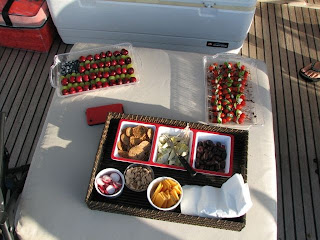 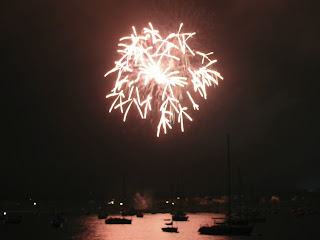 A small sampling of the celebration food fest, and the Bristol Harbor fireworks later

Since Sotito had the best facilities, the best vantage point and the highest decks in the whole harbor from which to watch the fireworks, and had kindly invited us, we headed there for the evening along with many more of their friends and a good contingent of Robin’s family. By the time the fireworks started, there were sixteen of us aboard. Sotito has plenty of space, so even with all of those people, the boat didn’t feel the least bit crowded.

Once all of the conversation started winding down, we managed to find our way back to Begonia around midnight. Before we knew it, it was already time to head back to Sotito to meet up with the crowd for the ride to the parade in the marina launch. 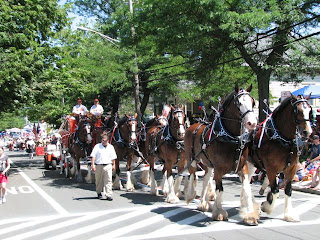 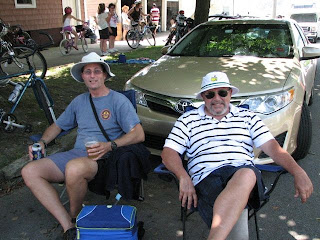 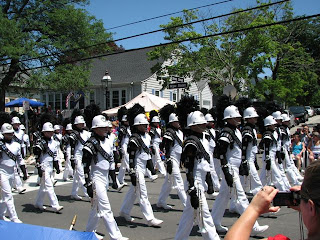 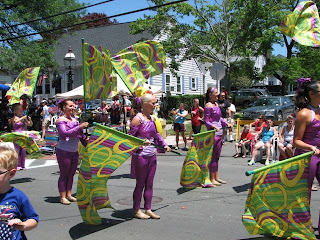 The parade was a pretty standard parade in terms of content. There was a lot of it, though. The parade from front to back must have been ten miles long. Most of it seemed to be marching bands and antique fire trucks with the occasional float celebrating some random theme. Themes seemed less related to the 4th of July than the sponsor’s desire for cheap advertising. My own personal award for laziest goes to a local car dealer who just drove by in a bunch of cars they had for sale. They didn’t even bother putting on red, white and blue banners. Classy. 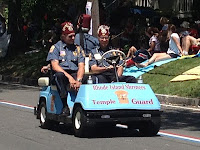 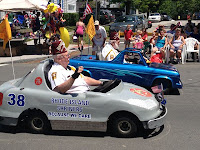 The Shriners, where grown men squeeze into miniature cars for any parade they can find - American Classic!

The cool part was the big finale: the Portuguese marching bands in full Carnival regalia. {Maryanne: This area has a historic and long term population of Portuguese immigrants, we are enjoying the food while we are here!} By then, the sun had been beating down on us for hours. I thought I was gong to melt carrying my big, heavy t-shirt on my back, and then I saw these guys. The head guy took up the whole road with his outfit that featured an eight-foot diameter feather ring. Okay, maybe my t-shirt wasn’t so bad after all. 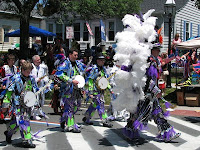 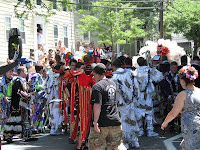 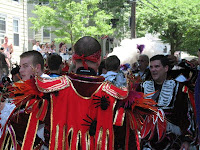 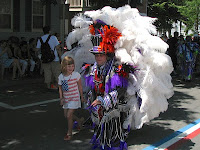 The Mummers, marching, and then taking a well deserved shade break allowed us to get a few close-ups of the costumes!

{Maryanne: Although Kyle might call the parade "pretty standard", and true there were plenty of marching bands, it was my first view of the amazing Philadelphia Mummers with their elaborate costumes that take all year to plan and make, and also the Shriners with their signature little cars. There were whirlizers, Miss 4th July contestants, Orange Crate Derby contestants, and well loved officials in the parade, additionally there was a great spectrum of the military represented (both past and present), many firing guns and cannons for the entertainment of the crowds. There was over 4 hours of constant parade entrants passing by us - it was AMAZING, and I'm so glad that we were persuaded to visit Bristol for the celebrations.} 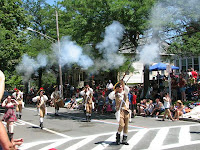 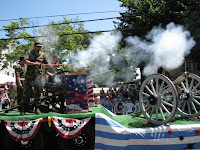 There was plenty of shooting during the parade too!

Back at Sotito, Andy decided he had not had enough of the Fourth, so, with six of us still remaining, we headed to Newport to see their big fireworks display. Two July 4ths in a row! It was the first time I had ever been on Sotito while underway. She was so fast and smooth and the sea was so far down from the bridgedeck that it didn’t seem like we were in it. It was more like flying above it. We headed directly upwind and were there in a couple of hours – no tacking necessary, although that trip alone probably would have blown Begonia’s fuel allowance for the year. 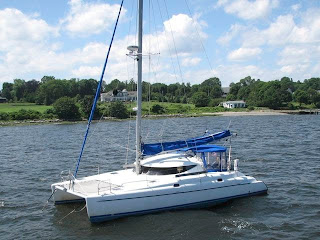 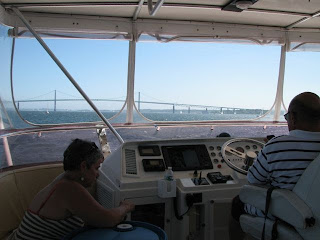 We took a tour of the packed harbor, which was mostly full of giant boats with constantly polishing professional crews. We couldn’t find an available mooring, so we anchored in what turned out to be a perfect spot outside of the harbor where the fireworks wouldn’t be obstructed by other boats. We also ended up with a view of a wedding taking place at a hotel on the point. How many years in advance did they have to reserve that? As soon as we spotted the bride and groom kissing at the end of the ceremony, Andy laid on his big train horn. The whole party turned to see who it was. We think even the photographer might have missed the big shot. 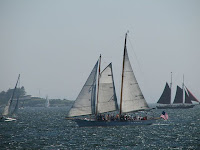 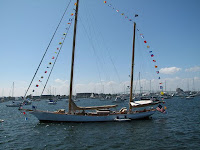 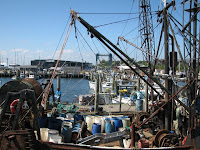 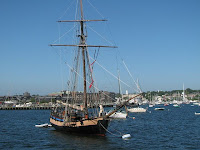 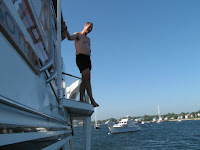 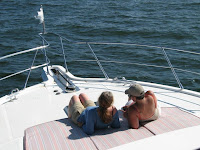 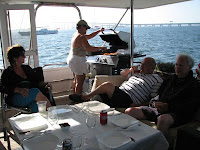 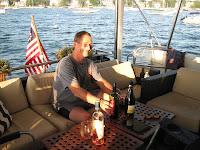 Swimming and relaxing aboard Sotito during a great sunny afternoon

Some more Sotito friends and family showed up in a launch until there were thirteen of us on deck by the time the fireworks started. At the end, there was an impromptu mega yacht horn contest. We lost, but not for lack of trying. 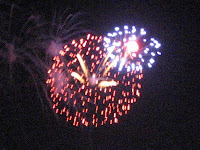 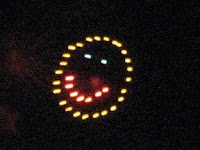 I had to go to work the next morning, so Andy and Robin were kind enough to get Sotito underway at first light to get me back to Bristol in time for my commute. That was a little rough on everyone but I was very grateful they were prepared to do this and allow Maryanne and me to have had these fantastic few days to share with Sotito and friends. 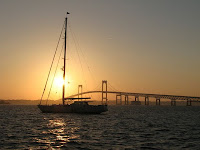 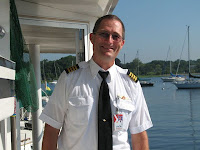 Sunset in Newport, but an early start the next day to get Kyle off on his journey to work
Posted by SV-Footprint at 4:00:00 PM

Sotito would like to register a complaint on the results posted by Kyle regarding the outcomes of the horn blowing contest that followed the 4th of July fireworks display in Newport Harbor. Sotito was clearly the winner - perhaps you were unaware of the judging criteria...

Looks like an amazing time in Bristol and a perfect July 4th all around - you had all the requisite ingredients and then some!