[Maryanne]Robinson Crusoe Island is one of the islands on the Chilean Juan Fernandez Group. It is the island where Alexander Selkirk was alone for over 4 years and it is Selkirks story that is the inspiration for the (fictional) Daniel Defoe novel 'Robinson Crusoe'. It has a population of around 700-900 and a small runway so does have a smattering of tourists. It also has the best diving visibility in Chile (20m+) so scuba diving is a big draw. There is only one town on the island: town of San Juan Bautista at Cumberland Bay (where we anchored). In 2010 the main town was mostly wiped out by a tsunami so many of the buildings seen now are temporary (e.g. the post office is a shipping container) or newly and beautifully constructed from local wood. Note there is also a Robinson Crusoe Island near Fiji, but that isn't this one... 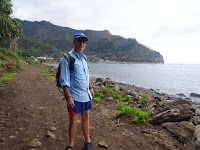 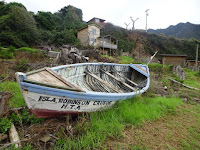 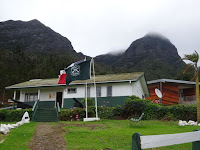 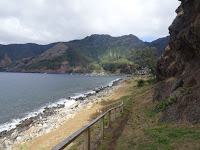 The island is also very special for its native species. According to the Island Conversation Organization "The islands host fifteen resident/breeding bird species, six of which are globally threatened, and 131 endemic plant species, of which 96 are globally threatened. More than 440 endemic invertebrate species, three endemic land-bird species, and the endemic Juan Fernández fur seal depend on these islands for their existence." It also has a little competitive edge with the Galapagos and regularly shares that "The islands are sixty-one times richer in endemic plant species per square kilometre and thirteen times greater in endemic bird richness than the Galápagos". Whatever the case, we know we are especially lucky to be visiting. 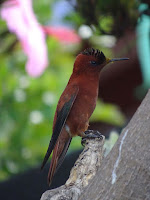 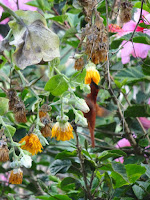 [Kyle]Having arrived at the island around sunset, we landed the dinghy the following morning on the rocky beach and walked to the Armada to check in. The Armada in Chile is always friendly, but I’m getting a little weary of the process. Every time, instead of looking at our existing zarpe and checking us in on their computer system, we have to go through the whole procedure anew as if they have never seen us before, answering a zillion questions so they can prepare and print us a new zarpe, even though all of that information is already on the zarpe we just handed them. We always think we’ll just pop in for five minutes, but end up staying over an hour or more. {Maryanne: Poor Kyle remains 'surprised' every time it happens, but it isn't so terrible and the folks are always so nice..., we just have to learn to plan for the extra time.}.

During what was left of our day, we went to CONAF (the Chilean National Parks Department) and paid our fees to enter the park, which encompasses the whole island outside of the one town. There wasn’t time left to tackle any of the many long trails in the area, so we spent the rest of our day exploring everything within the town and adjacent, before rowing back for an early night. Among the highlights were the Caves of the Patriots (where Spanish patriots were exiled after Chilean independence), and the older fort wall, and plenty of WW2 war fortifications along with some much older cannons. There is also a beautifully built wooden walkway built into the hill with numerous gazebos from which to chill and enjoy the views, a perfect place for a stroll. 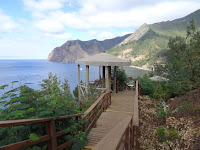 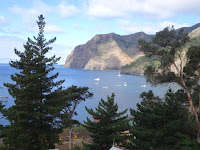 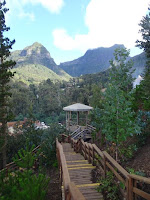 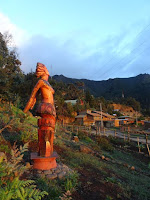 Rain was forecast the next afternoon, so we made a point of hitting the beach at first light to get on the trail to the Selkirk lookout before it got wet. As we were making our way up the hill on the town’s roads, we encountered lots of friendly dogs and cats, all looking for a scratch. At one hostel, a Very large (scary large) black dog that looked part German Shepard, part Rottweiler got up and came to the open gate to see us. The only threatening thing about him was his size, so I took a chance at giving him a pat on the head. 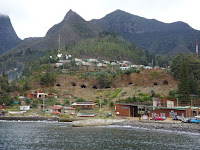 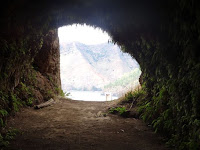 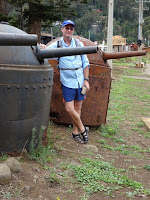 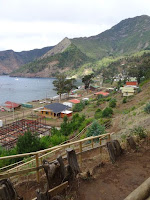 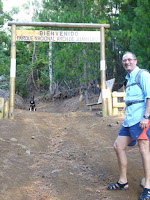 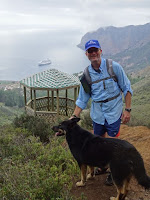 That was it. We were friends now. He was so excited because he knew where we were going and was going to show us the way, bounding ahead in full puppy mode. The climb was steep and we were going slowly, but he was always just ahead at the next bend, waiting for us.

When we made it to a gazebo at a viewpoint about three quarters of the way up, he plopped down in a corner like he owned the place. From high up, we could see the whole valley. A freighter had arrived as well as a giant cruise ship! We beat that crowd.

We continued further up to the top, where we were supposed to be able to see down the other side of the island. All we could see on that side was thick fog as the approaching weather rushed up the slope, broke through the saddle and tore into fragments as it headed down the Cumberland side.

We stopped for a break, sharing some of our snacks with our new friend. He was so gentle, we could hardly feel him taking his share from our hands.

When we started back down, he got a second wind and had a jolly old time diving into bushes and streams and digging for something he wanted to root out that we never could figure. At some point, Maryanne figured out he really liked the little red berries that were growing alongside the trail. Most of them at his height seemed to be gone for some reason, so she plucked a few high ones for him to his delight. Great! How are we supposed to fit him in the dinghy?

As we got to the edge of town, he tore off, chasing something or other. We thought he was gone, but then he returned a few minutes later wet and covered in another layer of mud. He was so clean when we met him. How were we going to explain this?

After running off a third time, at which time we were pretty sure he went home, a Conaf truck passed by and offered us a ride. The rain had already been late in arriving, so we took him up on it.

As soon as we started rolling, that big black dog came bounding out of the trees and started chasing the truck. He kept up for a while and then veered back into the trees. We came around a switchback and there he was again, sitting on the sidewalk. He made eye contact with me and gave me a look that cried, “Why?, why did you leave me?” I felt like such a traitor.

I had a pretty good mind to go back up to the hostel and pet him goodbye, but we needed to go to the Armada first to collect our papers. After that, we got swept up in a stream of cruise ship passengers headed the same way on their way to a party.

We chatted with one of them and found out the ship (the Oceania Sirena) was on a luxury around-the-world cruise. They had just arrived from Easter Island. It sounded like an amazing trip. 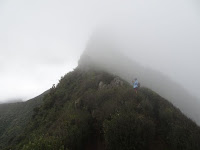 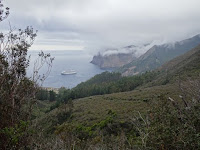 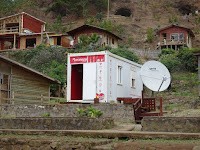 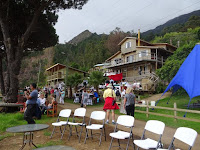 At the party, we had to fend off the advances of the waiters holding trays of empanadas and Pisco Sours (they assumed we were from the cruise ship). In retrospect, maybe we shouldn’t have. They were just most likely going to throw the unused stuff away.

The party was just getting into full swing when we climbed into the dinghy. Right after that, the sky opened up and it rained hard for hours. By the time we were back at Begonia, our clothes were stuck to us and the music ashore had stopped. Several hours later, we heard the ship’s horn blast and were just able to see them disappear into thick fog and rain.