[Kyle]At high tide, we left Tahanea through the middle pass, while Pizza and Eureka took the western one. That kept them in front of us, where we could keep an eye on them. The sail is not far, so the three of us planned on sailing slowly through the night. Being singlehanders, they would be taking short naps along the way. Usually, we are a little bit nervous sailing in close quarters with singlehanders, but Aleen and Adrian have a pretty good system. Depending on where they were, they would schedule radio calls every 30 or 60 minutes to make sure the other one is awake and to take stock. Listening to their interchanges, which ranged from short and all business to, “Jeez, guys, get a room”, convinced us that their situational awareness was almost as good as ours, and we were awake and looking the whole time. 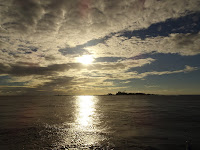 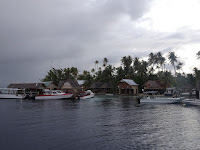 Sail to the Fakarava South Pass once more

We entered the South Pass at Fakarava as soon as it was light enough to do so, since the flood was soon to finish. We were hoping to find one of the nearby moorings free so we could go swim the pass, but they were all occupied. Since we knew from the year before that the bottom there is a Manhattan of coral heads, we didn’t even consider anchoring. At least we’ve seen it once.

Instead, we continued on to Hirifa, the motu on the eastern corner of the lagoon, where we found a big patch of clear sand to drop anchor. Pizza and Eureka followed us, but anchored by a sand bar further away from the trees, where the wind was better for kite surfing. We were all tired from the overnight sail, so we stayed in the rest of the day. 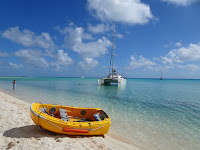 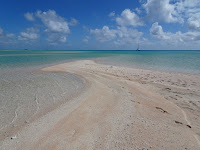 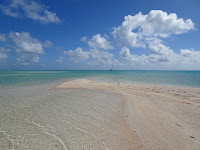 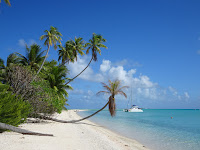 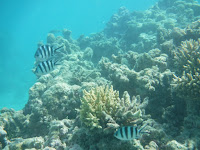 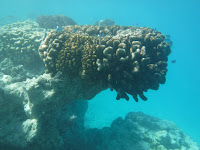 In the morning, we could see a lot of boats coming our way from the pass anchorage. It looked like our quiet anchorage was going to get a lot busier. The first came and anchored nearby, and then we heard a “Pan, Pan” on the radio. “Pan, Pan” is the step below “Mayday”. Nobody was in danger of dying, but they were in trouble. It seemed one of the catamarans we had been watching had hit a reef along the way and was taking on water. He didn’t have a Lat/Long but described his position as, “On the reef on the chart by Motu Kokakoka” Yep, you read that right. It was on the chart.

Another nearby boat transferred crew over to help and a megayacht at the South Pass sent over their tender to help tow them off. With all pumps going and a bucket brigade, they were able to keep the boat afloat until they got it to the beach near us at Hirifa. We rowed the dinghy over to see if they needed any help. We figured they would need as much muscle as they could get dragging the boat onto the sand. They seemed to have everything pretty well under control. The leaks were plugged as best as they could and they needed to remove the rudders before they could beach the boat, so we had some time.

When they hit the reef, they punched a series of holes just below the waterline on one hull. These, they were able to stuff with rags at the time and now they were busy filling with underwater epoxy. Their main damage was at the rudder. The shaft had bent and punched the blade through the hull. The location was difficult to get to and out of the reach of their bilge pumps, necessitating the bucket brigade with the first person standing to her waist in water. At Hirifa, they were able to remove the rudder and pack the hole. Now their plan was to get the boat stern to the beach as high up as they could with the goal of fiberglassing on a patch at low tide.

They had twice as many volunteers as space to do the work, so while we waited, we decided to have a look around the village.

It turned out there was no village, just three houses connected by a footpath. We were back in no time, but not before they had already beached the boat. Now their plan was to wait. Wait for materials, wait for low tide, wait to hear back from the insurance company... They were going to be there for a while, so it was, “As you were. Nothing to see here. Go back to your homes…” They were supposed to have paying guests coming in a couple of days…

Email ThisBlogThis!Share to TwitterShare to FacebookShare to Pinterest
Labels: Tuamotus