[Kyle]Once we were safely anchored at Beveridge Reef, and settled in, we called Ganesh for a longer chat. We invited Fatty and Carolyn to dinner the next evening. Even though we ended up anchored just over a mile away from them, they offered to make the trip in their dinghy so that we would not have to go through the trouble of de-lifeboatifying ours. 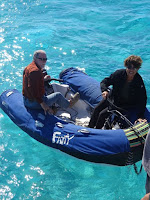 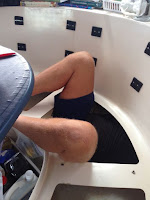 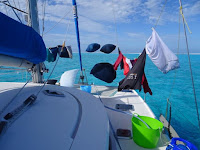 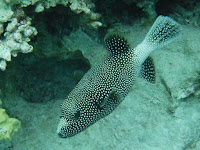 As I said before, we have been admirers of Fatty’s writing for a long time. Over the years, I’ve secretly been hoping we would find ourselves in the same place one day. They were in Greece the same time we were, but by the time we found out, we were in Italy and they had rushed ahead all of the way to Spain. Years later, I was in Chicago stuck in some horrible weather waiting for Air Traffic Control to let me take off and fly to some other equally bleak place when Maryanne texted me a photo of Fatty with his arm around her at the boat show in Oakland. Damn! By then, our boats were pretty much at opposite longitudes from one another, so our chances of ever meeting them became very slim. Once we took a whole year to make the big South Pacific loop, they were able to catch up to us. We saw them on the AIS in Huahine just as we left, but we were leaving, so maybe some other time.

The time had finally come. They arrived all dressed up and wearing broad smiles. We invited them aboard and within no time at all, we were laughing and swapping sea stories. Not only have they got a million of them, but they were also good listeners who seemed genuinely interested in hearing about the long, meandering path that had brought us into the same lagoon with them.

I told Fatty I had a bone to pick with him. He put on his patient and understanding face and braced for it. He gets a lot of angry letters to the editor from people who don’t get him.

”Back when we used to get your magazine,” I said, “I’d read your column and you almost always made me cry, you jerk!” I’m sentimental.

His face opened into a wide grin. “Finally! That’s what I was trying for!”

So there I was, sitting at lunch on our boat with a beaming Cap’n Fatty. I couldn’t have been more pleased if Bill Bryson sat next to me on a train and asked if I’d help him with the crossword.

The day went by much too quickly and we were soon parting so that they would have time to return to Ganesh in daylight.

The next two days were too windy for any of us to even consider leaving our own boats. Maryanne and I used the time to sleep in, watch movies and get a few jobs done on Begonia. My first priority, of course, was to figure out what had gone wrong with our windlass when we left Suwarrow. The relay box clicked when the buttons were pressed, but the motor wouldn’t turn at all. The event seemed too quick to have burned out the motor and it was way too new for the brushes inside to be worn out already. It was acting like either a fuse had blown or the gearbox was jammed. I had a vague memory of some sort of cutoff labeled “Windlass”, but couldn’t find anything. The vexing thing was the click. If power was getting to the relay box, there was probably not a blown fuse. We have several layers of fusing in our electrical system and most would have caused other things to fail, all of which were working.

That left the gearbox. In order to test that, I had to remove the whole windlass so I could get the cover off of the electric motor and disconnect that. Once that was done, I was able to determine there was nothing wrong with the gear box. Okay. Next, I disassembled the electric motor, found that it still looks brand new and put it back together. When I tested it, it still wouldn’t work so I did it all again for good measure with the same result. Weird. I then wired both it and the spare motor from our old windlass directly to the batteries and discovered they both work fine.

That left me with no other alternative than work my way through the entire electrical system all of the way between the batteries and the windlass motor. This meant we had to tear apart the boat and empty lockers so I could wriggle my way into the deep, dark innards of the boat with our multimeter to trace the problem. I swear, every time I do this, I think I will be too old for it in another week’s time.

At great length, I learned a couple of interesting things. First was that the power to the windlass control uses a completely independent circuit than the power that goes to the motor. That’s why the relay clicks even when there’s no power to go through it to the motor. Second was that our port motor does NOT actually have to be running for the windlass controls to be activated as I have thought for years, the switch just has to be on. That saved a lot of fuel doing the diagnoses.

Eventually, I figured out it couldn’t be anything except the power over the big wires from the battery to the windlass motor. I was hunched over the batteries, diligently tracing every wire attached to each and looking for a fuse I may have missed when I saw it: the windlass circuit breaker. It was off.

I look at that thing every time we use the engines, but since it has never tripped, I guess I stopped seeing it and started thinking it as part of the wallpaper, so to speak. I flipped it back on and, sure enough, everything worked just fine. At least I learned a lot and now our electrical system has had a good inspection. Groan. 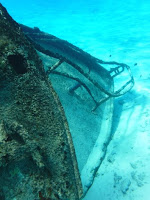 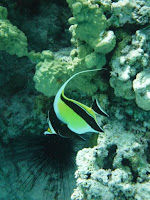 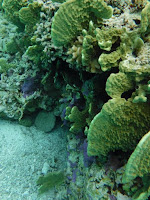 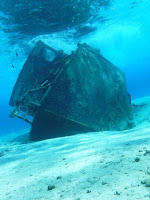 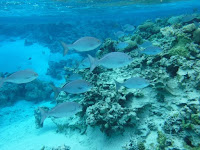 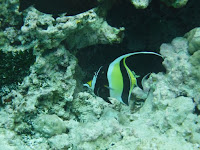 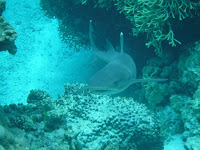 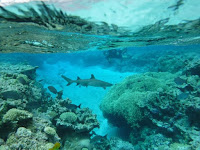 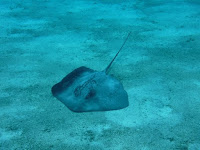 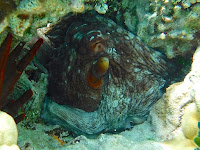 Fatty called and said he was having the same symptoms with his windlass. I tried to save him the same trouble I had by going through what I learned over the radio. After a while, he called back and said his motor was bad. Our spare motor is a little less powerful, but it was from the same manufacturer and looked like it would fit their windlass, so we offered it to them, at least until they could get a proper replacement. With ours up and working again, we upped anchor and moved closer to them to shorten the transit distance. By the time we were settled in, Fatty said theirs was fixed. Their motor was old and dirty and had been overdue for a good refurbishing. Once it was polished up, it was like new again.

The howling winds of the previous few days started to abate and they called to invite us to dinner aboard Ganesh the next day. Wow, she is really lovely and well appointed for this type of cruising. Even though they probably have about as much interior space as we do, Ganesh seemed much less cluttered. They are on their fourth circumnavigation and their boat is also their only home, but you couldn’t tell by the clutter. They even have room for bulkhead art and little knick-knacks as souvenirs of their travels.

We had another rousing evening that passed too quickly. At the end Fatty and Carolyn both signed our dog-eared copy of “Chasing the Horizon” and gifted us a copy of his book “Red Sea Run” about their trip through Pirate Alley to the Med. We learned why we had missed them in Greece and why they had gone that way in the first place instead of going around South Africa as usual; they were rushing to Spain to attend the birth of their granddaughter. Their stories of both routes sound harrowing, but I think we are still very much favoring the southern route.

In the morning, they called us early and surprised us to say they were leaving. I popped my head out into the cockpit and could see them heading toward the pass, already with sail up. We wished them farewell and watched as they slowly receded over the western horizon. They were heading for Tonga.

That left Begonia as the Royal Palace for both North and South Beveridge. We stayed for another week. Apart from one other boat that arrived to swim the pass and then left again the same day as Ganesh without saying a word, we neither saw nor heard anyone else.

Email ThisBlogThis!Share to TwitterShare to FacebookShare to Pinterest
Labels: Niue