Sailing through the Ha'apai Island Group

{Maryanne: Last year we had a fantastic time in the Ha'apai island group and we were hoping to repeat that this year. Unfortunately strong winds from the wrong direction, rain, and generally lousy weather (and forecasts) prevented that for the most part this year. We had to work with what we had, and make the most of it - which would mostly mean some rougher than we'd like passages and hanging out on the boat waiting for better weather.}

[Kyle]We left the Vava'u island group late morning for the overnight sail to Nomuka, just south of the middle of the Ha’apai island group. The wind was a bit forward of where we would have liked it to be, but it was strong and steady, so we were at least able to go nice and fast with just a scrap of each sail flying. The beam waves were the only downside. Once we were out of the protection of the islands of the Vava’u group, the endless rolling became increasingly annoying. It was good to know we only had to put up with it until morning.

When Maryanne handed Begonia over to me at midnight, we were almost there. She had been sailing fast under star filled skies and we only had a dozen or so miles to go. I rolled up the jib completely to slow us down. We were still going too fast, so I finished my coffee and pulled the mainsail down, too. My plan was to unroll the jib to the size of a couple of beach towels and coast in.

It didn’t work out that way. As soon as I released the mainsail halyard, not only did the main come down, but also the starboard half of the sail bag. I figured out later that the mainsail had been out a little too far. The lazy jack line that holds up the bag got pinned between one of the battens and the spreader on the mast and almost chafed through. When I lowered the sail, it parted.

With no bag in which to go, the sail spilled out all over the deck. After much wrestling with it, I came to the conclusion that I needed to gybe so the wind would help me push the sail into the good half of the bag. My choices for getting back to the cockpit were to dive under it and fight my way through or go to the other side. That side was the side taking all of the spray, but what could I do?

At length and with much effort, I managed to get the sail into the bag. I tied the fallen starboard side to the intact port side and got the whole thing zipped up. I unrolled the two beach towels worth of jib and we were back in business.

To add to the fun, it was raining the whole time this was all going on. It wasn’t a little drizzle, either. It was huge rain being swirled around by the wind so that it came from every direction at once, even below. Thunder and lightning were pretty much constant. I spent the rest of my watch cold and drenched. I stopped trying to go inside and dry off because I knew I’d be soaked the minute I stepped back into the cockpit. No point getting more than one outfit wet.

As soon as the sun came up, the skies cleared and we were able to eyeball our way to a nice sandy spot behind the reef at Nomuka Iti. We did the checklist and then I went up the mast to replace the lazy jack line. Now we were ready for the next leg.

Our nice northeast wind was forecast to shift to the south early the next morning, so we would have to be up early to make the most of it. In the meantime, we shook off the cobwebs of the night watches and had a snorkel on the reef.

Wow! It was exactly what we had missed in the Blue Lagoon. There were giant areas of healthy coral everywhere with lots of fish. Maryanne made the comment that it was like we were swimming in an aquarium. It really was and it completely made up for the last place. 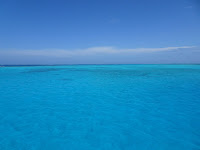 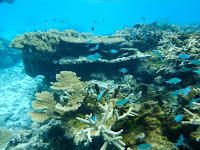 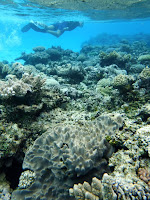 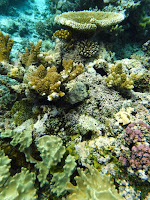 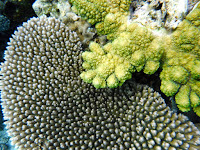 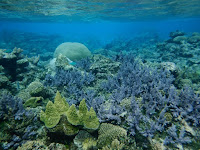 Hanging out in Namuka Iti where there is one of our favorite reefs. Shallow enough to appreciate while snorkelling and giant (imagine a soccer field size to explore close up), it has plenty of fish and nearly complete coverage of healthy corals

We left at first light for Kelefesia. Our northeast tailwinds lasted about a mile and then shifted to increasing direct headwinds. Fleh! The current was against us, so sailing wasn’t working. After a while the wind got so strong that we had to start the second engine just to keep moving.

We would have turned back, but the wind was forecast to double within the next twenty-four hours, so we just hunkered down and endured it.

At Kelefesia, we dropped the anchor in our old spot and then I swam on it to make sure it wasn’t just set, but buried. There’s little room to drag. I swam over to the coral heads ringing the little anchorage and confirmed that Kelefesia was still a beautiful underwater spot. It was starting to get rough, though and the sea was a bit churned up, so the visibility wasn’t the best. Perhaps we’d go for a proper swim later. 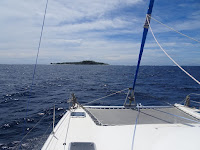 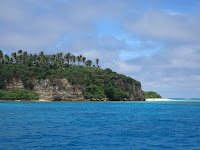 That never happened. The wind was blowing into the mid twenties. We felt uncomfortable leaving the boat, so we just stayed aboard and fretted. The nights were particularly hard. High tide came then. Some swell would make it past the reefs and roll us around and we could hear big waves breaking on the reef astern. Every time one of us would get a little too nervous, we’d go out on deck with a spotlight to check on things. We were always fine, but the sound of the wind and waves made it seem worse when we were in bed where we couldn’t see out.

On our last day there, I took another swim to look at the anchor again. The visibility was so bad that I had to pull myself along the chain just to see the bottom. Our anchor was still where we put it and the end of the chain on that side wasn’t even pulling hard. I never would have guessed it from the surface. Snorkeling for fun was out, though. Maybe next time.

By the time the sun came up the next morning, the seas had been building for three days and we were past ready to get out of Kelefesia. We started the motors and made sure they were well warmed up before pulling up the anchor. We did not want to be at the mercy of the wind.

Everything was going well until we were almost in deep water. Then we got hit by THE WAVE.

The Ha’apai has examples of a phenomenon known as blind rollers. Mostly, these are dangerous because they are hard to see from the back, so it’s necessary to use caution when going into anchorages where they are known to be. The other reason they’re dangerous is that they seem to come out of nowhere. Everything will be nice and tranquil for a while and then all of the accumulated water will start draining through narrow gaps in the reefs. When that happens, a kind of standing wave is created, seemingly out of nowhere.

When our wave hit, we were motoring along in a gentle one meter swell. Then I noticed the waves to port were looking a little aggressive. We rolled over a big one and then the one behind it just kept rising and rising. It was one of those totally awesome surfer’s waves with a pipe big enough to stand up in. This is the wave of my nightmares. Well, maybe a 2/3 version of it, but there was no time to take a measurement.

The top disappeared behind the bimini and all we could see was a vertical wall of blue water barreling toward us. We both knew there was no way we were going to just float over this one. I put the helm hard over and managed to get us about thirty degrees from perpendicular when the wall hit the port bow. Maryanne was inside watching through the cabin windows. She laid her torso over the fridge and held on. I grabbed the wheel with both hands and planted both feet as far apart as I could get them. There wasn’t enough time to fully process what was happening so we weren’t even properly scared yet.

Then everything went white. The crest of the wave broke over the cabin, over the bimini, over the boom. For a brief second, the only part of the boat above the surface was the top three-quarters of the mast. I knew the wave wouldn’t be big enough to flip us, but in that tiny fraction of a second, I remember having time to hope I remembered that number correctly. I also had time to worry about damage. We might not be flipping, but a wave like that could tear the bimini off, or the solar panels, or the dinghy, or rip one of the windows off and fill the cabin. Through the wheel, I could feel that the rudders were going through all sorts of havoc and hoping our new extra strong ones were strong enough. If anything happened to them or our engines or our props, we would never survive being washed onto the reef to starboard.

With most of the boat under, the air in the cabin gave us lots of buoyancy to pop out the backside like a cork. I didn’t get washed out of my seat. My glasses even stayed on. We took no damage, but everything outside got really wet. There’s another set of dry clothes dunked. {Maryanne: and one of our precious headsets has not worked again since!}

Our engines kept running like nothing had happened. Another biggish wave splashed the foredeck and then we were motoring along in serene one meter seas again. Yeesh! By the time the next roller came, we were a quarter of a mile away in the safety of deep water.

The rest of our sail to Tongatapu seemed sedate by comparison. With double reefed sails, we screamed along to the distant safety of Nuku’alofa harbor. I got doused frequently enough that I was still dripping wet when we set anchor at Big Mama’s on Pangaimotu Island (Royal Island). Maryanne made a hot meal while I changed into dry clothes and in no time, the whole day seemed like it must have been a bad dream.

Holy Crap!!!
I’m so thankful you are both expert sailors but something like The Wave can obviously upset almost anything. So glad you’re both ok.