[Kyle]After almost a week of horrendous weather, The winds died down and the sun came out. As we had been told would happen, everybody in Auckland with any kind of watercraft (which is to say everybody) came out to enjoy the nice weather. School holidays are until the end of January and traditionally the whole country goes on holiday starting the week before Christmas.

The weather wasn’t so good over Christmas, but now there were boats, boats everywhere. Our anchorage, which seemed to have a reasonable density at twelve, swelled and shrank hour by hour as boats came and went. Sometimes we would have as many as thirty packed check and jowl, sometimes we would be down to only eighteen. Families were out swimming or playing on the beach. Some stayed on their boats and fished. Maryanne even had a swim herself. I was not doing so well. Every time I looked like I was about to do anything the least bit strenuous, Maryanne would order me to stay put on the settee where I belonged. Bummer. 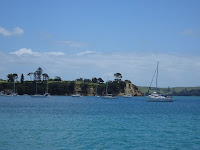 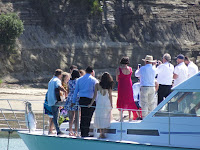 The sun came and the boats arrived
The Sun was just in time for someone's wedding!

{Maryanne}We're hoping Kyle is going to be mobile enough to enjoy Auckland. The enforced rest is difficult for him to tolerate so I've needed to be extra bossy.