[Kyle]After I hurt my foot, I was able to get away with light duties for a few days. Maryanne got into the routine of going for a long walk in the mornings before it got too hot. After a while, I joined her for a small portion of it before limping home alone. After another week or so, I was doing the whole thing with her. Then we occasionally added in a bonus bike ride into down for some errand or another. 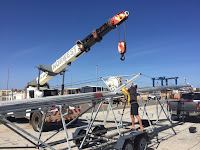 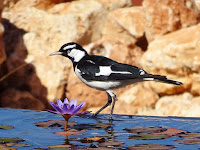 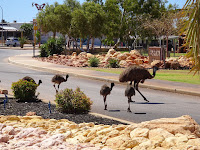 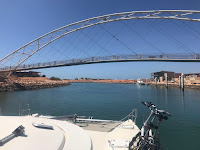 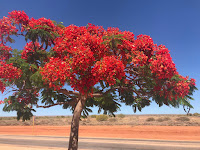 Enjoying the sights around Exmouth
Magpie-Lark, Emus, and the tree is a Poinciana

My appointment for removing the stitches was approaching. When I called to verify the time, I asked how much the ten-minute visit would cost. The woman on the phone answered $353! What‽

It turns out this is because I am not Australian and because Exmouth has no medical offices in town except the hospital. Had I been able to go to a Dr's office, my visit would have been something like forty bucks. Since the care is delivered in a hospital, though, even if it is routine Dr's office stuff, the charge is for a full-blown hospital visit. Since Aussies are all covered by their national universal health insurance (called Medicare), it doesn't matter to them since they are fully covered either way. The price for Medicare ineligible patients is set by the federal government and there is nothing I can do about it.

Oh, yes there is! Maryanne has been waiting for this day for twelve years since we started cruising. She has been chomping at the bit to dig through our rusty tools and perform a little amateur surgery on me. I mean, she went through EMT training and we have this giant, comprehensive, and so far unused medical kit. I have kept her at bay all of this time from coming at me with it for every little toothache and minor scrape. To save $353, I decided I would let her take my stitches out. I know she was really wanting to get a chance to use the bone saw and a few hemostats for a battlefield amputation. Let's ease into it, shall we?

She did a marvelous job! I really didn't feel a thing, other than a slight cramping for keeping my foot on the table where she could work on it. It is much nicer to walk around without having to put weight on stitches. {Maryanne: After watching a couple of YouTube videos, it was clear this is an easy procedure, we just had to be sure to stay sterile and be gentle} 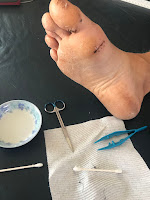 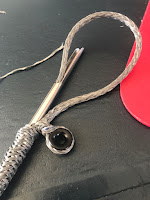 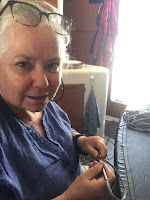 Removing Kyle's Stitches, and splicing for the new lazy-jacks

After a great deal of back and forth, our boat insurance company officially agreed to cover the bulk of the charges for our repair, getting the money directly transferred to our bank account required a bit more effort (the default is to send a check). Ugh! Had they just told us what they wanted in their initial emails, we could have saved a week. We were keen to pay our bill with the rigger as a show of good faith.

It didn't end up mattering much anyway. Some of the critical parts our rigger needed in order to complete the repair were stuck in the mail. Australia is super far away from the supplier in England and the mail has become even slower since Covid. After waiting another week, our order finally arrived in Perth incomplete and with broken parts. We agreed to have Brent do what he could with what he had so we could at least get out of the cyclone zone. We would finish the job in Perth when we got there.

After a full day of driving, Brent and his engineer, Tony, arrived with our mast in tow. Oh, it is so good to see that again! I was getting a little weary of the regular 'powerboat' comments from some of the other sailboaters.

For the duration of our stay in Exmouth to date, we have generally had the last ten docks to ourselves, with Begonia way out at the end with just the seagulls for company. Then, the night before Brent and Tony showed up, two other catamarans arrived, each coming from different directions, and tied up on the opposite side of our float. The first was a husband and wife taking their boat home to Perth from Darwin. The other was a couple of lads taking their new boat from Tasmania to Malaysia, where the owner has a business. We had just enough time for quick hellos before the work started.

The first order of business was to install the martingale (the wire above the beam at the front of the boat). This is harder than it sounds because the tangs at the end of that wire attach to the actual bolts that hold the beam onto the boat. Those bolts were being replaced as part of the job. This means the beam had to be removed and then reinstalled in the process. The existing bolts had been installed by me almost nine years earlier. I put them on as tight as I could with lots of super-strong thread locker. Since then, the beam has spent much of its time being plunged repeatedly into the sea, which helped seize things up a bit even more.

To help as much as I could with the job, I made it one of my main missions while the mast was gone to at least get the bolts unfrozen. Maryanne bought me a BIG wrench at the hardware store to replace the one that snapped and then I spent a week leaning hard on the thing every three hours, following a liberal application of penetrant. I was really worried I was going to twist the head off of the bolts. I finally got them to budge after blasting them with our propane torch until they started to glow. Then it was more heat and more penetrant for a few more days before I finally got them each backed out two turns, but I screwed up my back in the process. At least it took my mind off of my foot. I told Brent to bring his biggest, most powerful tools to finish the job.

Brent and Tony got the bolts out in about thirty minutes each using big hammers and a giant impact driver. Our boat sounded like a road crew jackhammering a hole. I noticed that all of our new neighbors shut themselves inside for the duration. The new bolts went in easier, but in no way easily. By the time they were done, the temperature had reached 41.5C (107F). To make matters even more uncomfortable, the sun had just passed our latitude the day before. That meant that at solar noon, which it was just now. The sun was 89.8 degrees above the horizon. The only shade to be had was by standing at attention while wearing a wide-brimmed hat, which of course nobody could do and still work. Noon is also when the wind dies in Exmouth, removing any cooling breeze. Brent and Tony must have been miserable, but they worked without complaint. Maryanne and I helped when we could and spent the rest of our time shuttling cool glasses of fizzy water back and forth with for them. Once the Martingale was done, we all agreed that the earliest possible start was desirable for the next day's mast stepping. 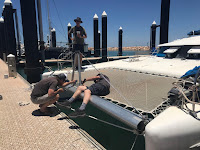 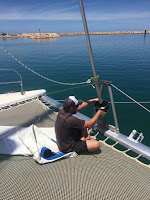 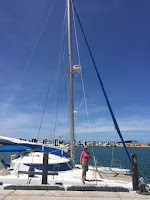 Return of the rigging and mast, etc

I'm sure we all would have been fine with a five a.m. start, when it is actually still a bit chilly, but the earliest the crane could be scheduled was 8:30, which really meant 9:00. The mast went on pretty quickly. Then came the kerfuffle of getting the boom attached and the mainsail on. Some of our halyards had been run through our spreader triangle for the road trip and none of us realized until the mast was up. Brent had to go aloft a second time to retrieve them.

By the time the last task of raising the lazy jacks was upon us, it was that crazy hot part of the day again. When we went to hoist, one side was all twisted on itself, requiring another trip up the mast to re-run. I had handed the line to Brent on his second trip up without checking that everything was properly untangled. He made it clear that the third trip up would be my job, but first we all needed to find a nice, cool pub for a late lunch.

Lunch was a good idea because it gave the day some time to cool off a little before I went up the mast. The bad thing was that it was a big lunch with a beer to wash it down. After being sat down for a while, my body clearly thought we were done for the day and resisted any serious attempt at movement, but especially lifting myself straight up in a climbing harness on a full stomach. Fixing the lead on the lazy jack line only took ten seconds once I was up there. Lesson learned.

We were out of our comfy bed again early the next morning. This time, it was so that I could squeeze myself into the coffin-like space under our settee to snake and make the connections between the fifteen wires going up the mast and Begonia's electrical system before it got too hot. 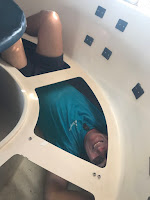 Reconnecting all the bits to the mast

I was only somewhat successful. Our refrigerator compressor is also in that space. Since Exmouth is hot generally, it spends a lot of time dumping the heat from our fridge into that compartment, keeping my legs and feet toasty warm. When I finally emerged, the first thing I did was turn the hose on myself. Ahhhh!

With that done, our next order of business was to go for a test sail to make sure everything was working properly. Oh, how it felt good to be back on the water. Just being a mile or so from land made it ten degrees cooler. We raised and lowered each sail, reefed, unreefed, tacked, gybed, the whole set. Everything seemed to be in good order. Our mainsail track had been refurbished and, combined with the new halyard sheaves (rollers), the sail went up and down with half of the former effort. Same with the jib on the new roller furler. We got slightly bigger wire on the switch from imperial to metric. The wire has a higher working load, which means it is tighter when properly tensioned. With the tighter rig, we seemed to be able to point five degrees closer to the wind than before. Everything really was looking great. We are ready to start moving again! 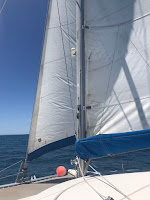 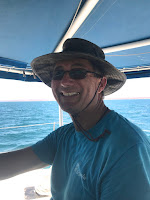