[Kyle]In spite of the beauty of the mountains and the beaches around Grand Case, The only thing any of our guidebooks mention to do is go out to eat at one of the many fine restaurants in the area. In fact, they all mention that this is a must do – not to be missed. Grand Case considered the culinary capitol of the island. Nearly every business was a restaurant of some type, particularly on the beach side. We rowed ashore in the dinghy to explore the town. 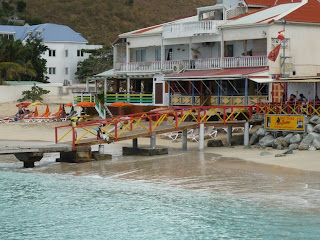 The dinghy dock was rather menacing looking, made out of concrete with pieces of wood jutting out like dinghy-eating teeth. There was a slight surge, giving the impression that the dinghies already there were a cud being slowly chewed by a cow. We decided the best course of action was to set a stern anchor to hold her off the dock. When we got there, It took me several tries to get our little grapnel anchor to bite into the sand. I finally did get it to hold, tied it to the stern line and had Maryanne pull me in (she was standing on the dock with the painter in one hand). She pulled in on the painter while I slowly let out the stern line so that we could get the dinghy into just the right position so that I could step off but the dinghy wouldn’t touch the dock. As the dinghy approached the dock, I pulled on the stern line and – nuttin’ – no resistance. I pulled up the end of the stern line minus the anchor while Maryanne tried to keep the dinghy from submarining under the dock. Musta messed up the knot.

Well, in the manner that all of these things seem to happen, it was almost lunchtime and all of those many restaurants with all of their balconies overlooking the beach had hundreds of people who got to be entertained by the plight of a sailor that couldn’t tie a knot. 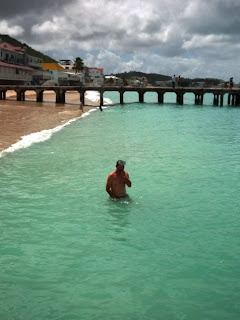 Luckily, the water wasn’t too deep. It didn’t take me too long to realize that my best option was to take off my shirt and shoes and go looking for the anchor, much to the amusement of the dinner-and-a-show crowd. [Maryanne]Sure it didn't take him long to realize this, I was raising my eyebrows and pointing at the water - "get in there and get our anchor back you wally!" was the unspoken command!

[Kyle]The water was up to my neck. I paced back and forth, hoping to kick up the anchor rode but was not having any luck. The surf had streamed the line in some weird direction and the anchor was being slowly buried in the sand. Small groups of people were gathering on the beach and on a nearby pier and pointing helpfully at places they thought I should look, most of which were nowhere near where it could be. A guy on a dive boat threw me a mask but the surf was churning up so much sand it wasn’t doing me any good. Eventually I stepped right on it and dove down to retrieve it. I held it out of the water for all to see. Some people cheered. A few seemed disappointed. I think many were hoping I would give up so that they could go look for it. I did my best to swagger out onto the beach with my best I-had-meant-to-do-that-the-whole-time look so well practiced by clumsy cats everywhere, but I don’t think I pulled it off.

Luckily it was hot and breezy and within a few minutes of putting the rest of my clothes back on, I was dry and no worse for wear. Maryanne and I went from one end of town to the other (about a mile) studying menus so we could decide where we would have dinner that evening. By the far end of town we had seen so many menus that they had all run together and we couldn’t remember which specific place had that specific thing that sounded so good. All of that thinking about food and the long walk was making us hungry, so we stopped at a patisserie and had delicious tarts and strong coffee. We also bought a couple of baguettes for later, only one of which made it back to the boat. That was yummy, too. 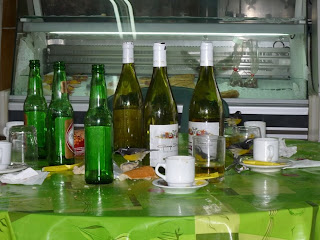 I love this picture - this is the remnants after a few French friends spend a couple of hours catching up with the gossip - ah the cafe life. Despite the number of bottles of wine, there were only 4 people at the table - You just know they had fun! And, of course, the birds are glad they left a few crumbs.

The patisserie had this adorable cleanup crew. The second anyone left their table, little yellow finch-like birds would descend on it and vacuum up the crumbs. 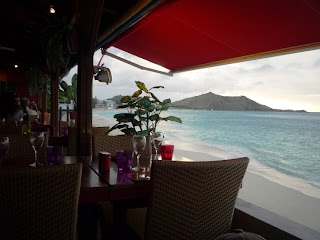 View from Le California in Grand Case, St Martin - the food was great too!

We took a couple of hours strolling back along the long beach, taking our time. Eventually, even though it was a bit early, we settled on Le California restaurant, which we chose because it had a balcony relatively close to Footprint and because the menu looked good. We took our time enjoying a nice slow dinner while the sun set. The appetizers were wonderful, the main courses were incredible. I don’t like Pina Coladas but Maryanne had one that she let me taste and it was yum-yum-yummy. Those coconuts were still breathing! Then, even though we knew we had already spent way more on a dinner out than we should have, I allowed the server to talk us into a dark chocolate fondu for dessert. Oh, magnificent chocolate fondu, what an unbelievably fantastic chocolate thingy you are. Wow! That was one of the very few times cheap old me spent that much on a meal and didn’t mind one bit. Everything was absolutely delectable and worth every penny. Ahh, the French and their relationship with food, you’ve got to love it. 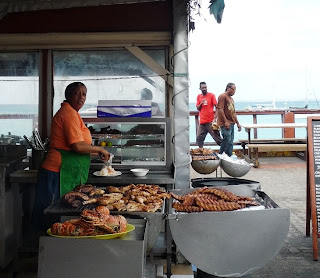 Our next day in Grand Case, we slept in and went ashore to have an early lunch at the lolos. Halfway between a restaurant and a roadside shack, the lolos are individual kitchens, mostly barbecue, that in Grand Case occupy a common area – kind of like a French/Caribbean food court. Prices here were much more reasonable (ribs for $4 US) and Maryanne and I were able to get a nice lunch for $13 for the two of us, including a cold beer each. As lunch proper rolled around, it began to get a little crowded, so we took yet another beach stroll and ended up at Calmo’s beach bar. Calmo’s has such a nice atmosphere. In the back, away from the beach, they have cozy places to sit with wood floors that resemble what you would find in an arty coffee house. As you go toward the beach, the place very gradually morphs to picnic tables with a sand floor, then to tables in the shade of palm trees, then to beach chairs in the blazing sun, where you can put your feet in the surf. It happens so gradually and seamlessly that it is possible to get exactly where you want to be on the sliding scale of coziness versus beachiness. They make a good strong ti punch there, which I drank slowly, while Maryanne nursed a beer. We stayed for the rest of the afternoon until it was time to take the sunset walk back to the dinghy and Footprint.

[Maryanne]Since this is the last break for Kyle for a while before we focus on boat maintenance, we agreed to spend this trip chilling out. We ate out way more often than we would normally do, and also didn't restrict ourselves to the cheapest of menus we could find. We were both relaxed and enjoyed it... Of course, now we are happy we don't have a motor. We need to work off all these wonderful extra calories!
Posted by SV-Footprint at 4:20:00 PM

Glad you enjoyed Grand Case. It is one of our favorite spots for relaxing and eating good food in St Martin.

Nice story, happy to hear you had a good time at La California - I'm sure they would love to hear about it too. If you feel like it, you can leave a review for them on DineSXM :)

Kyle--find a publisher! No better way to start or finish my day than reading your writing. That goof-ball sense of humor you've been nursing all your life is delightful!

see, now you're talking my language - FOOD! my favorite sentence is kyle's "oh, magnificent chocolate fondue, what an unbelievably fantastic chocolate thingy you are.” but let me ask you - are you eating things like ribs and steak? the picture of the lady grilling showed some serious meat being offered (and were those giant prawns?? amazing!), and i just wondered if you were partaking or restricting yourself to seafood & veggies.

Well Kate, we are still vegetarians (well, about 98% of the time). We'd love to be able to get free range chicken but to be honest all the food in the islands is shipped in from Miami and we are certainly not catered to on that score. I see chickens all around, but I've not managed to find anywhere to purchase them (maybe they only keep them for the eggs and family use).

So although we got to experience the wonderful aromas of the BBQ, we didn't taste.

Oh and those giant shrimp - they are the local "lobster". Slightly smaller than the Maine lobster and without claws/pincers, I think we'd probably call them crayfish, or even crawfish (depending on where you live) but in the islands they are called lobster.

Just like in the USA, lobster is the expensive meal option (here in BVI I see it's $50 for a lobster meal in the local shack restaurant - the Loose Mongoose).