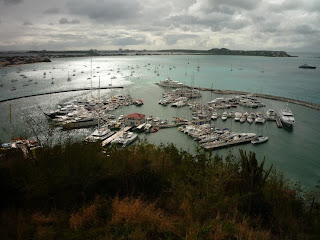 [Kyle]From Grand Case, our next stop was the French side of the Simpson Bay lagoon. We got an early start so as to be ready for the 0830 bridge opening. It took is several tries to get the anchor to hold in the loose shells of that side of the bay, but since we were in only about 2½ feet of water, it was easy enough for me to wade out and make sure it was really set. From there, we rowed ashore to the town of Marigot, the Capital of the French St Martin. From the dinghy dock into the town the street was very busy with lots of traffic throwing up dust just like the Dutch side. There was nowhere sensible to walk, so we were constantly alternating between gaps in the traffic and bushes or puddles off to the side. Traffic was way too close and fast and chaotic for my comfort. I felt like we were trying to cross a freeway at rush hour.

Then it started to rain - hard - and it didn’t stop - like Seattle in the winter. For the next week it was all anybody talked about, that time it rained practically all day without stopping. People kept saying things like it was the most non-hurricane rain they could remember. It certainly didn’t make our traffic situation seem any safer.

Eventually, we made it into a quieter part of town and came out of the rain to have a nice lunch at a café under an awning. I don’t know what it is with these French territories, but they really do make noticeably better bread here.

Afterward, we decided to clear out of the French side, which we can do 24 hours in advance. We walked over to the customs office in Marigot. There was no waiting area of any kind, just a sign on a locked door that said knock hard then wait. We did that, and after a few minutes, a very annoyed looking woman opened the door.
“What do you want!?” she barked
“Yes, um, hi. We wanted to clear out please.”
“There’s already people in here. Wait!” she snapped and then shot a look at the sign, implying that we were idiots for not knowing that it really means wait, then knock hard, then wait.

After a while, a big guy who looked like he would kill us if it wouldn’t get him fired came out.
“What do you want!?”
“Yes, um, hi. We wanted to clear out please.”
“I didn’t clear you in!”
“Yes, we cleared in at the Radisson Marina.”
His eye twitched. “You didn’t clear in here!”
Uh, oh. “We understood we could clear in at the Radisson.”

With that, he scowled and held the door and waved us in in the manner of a police officer holding the door as he’s putting someone in a cell. He gestured at a chair in front of a computer and told me to fill out the online form. He kept asking if I knew where my boat was and then arguing with me that I was wrong. Maryanne finally convinced him that we were actually in the lagoon by telling him we went through the 0830 bridge. Anchoring in Marigot Bay has fees and I think he thought we were trying to get away with something. Eventually, he printed the form, said “You’re done.” and showed us the door. [Maryanne]Kyle had to return later in search of a lost baseball cap, and be very nice to the same guy... Luckily he did find his hat, but not at the Port Authority office.

[Kyle]We decided to walk off our disappointment with a climb to the fort overlooking the harbor, which had some nice views of the bay and the town. It was still raining pretty hard, so we took shelter in the nearby Arawak Museum, where we spent a couple of hours enjoying the very good exhibits about the history and geology of the island. 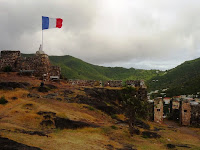 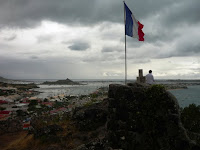 We slogged back through town to the supermarket by the dinghy dock to stock up on some nice French provisions for a cozy dinner at home. I got stuck at the wine section. I had this idea that we should buy a nice French wine, but the selection was overwhelming, so my poor brain went into gridlock. Eventually, some nice Frenchman must have noticed the short circuited look on both of our faces and recommended a Corbières (described online as a cheap, uncomplicated red.) I’d never had a Corbières, but he seemed nice, and it was inexpensive, so we bought two bottles. It turned out to be very nice, very friendly on the palate. Well done, anonymous Frenchman!

The next morning, we returned to the Dutch side, cleared in and found an anchorage that’s convenient to almost everything (except wireless signals!), especially a nice patisserie that lets us tie up the dinghy there.

[Maryanne]Anyone that knows us will also know that Kyle and I are not the least bit religious, but we did find ourselves in Nevis on a quest to find the famous black Jesus crucifix (we failed, the church was locked up)... In one of the many rain showers we took shelter in a church in Marigot, only to find us a black Jesus painting.... Interesting world isn't it? 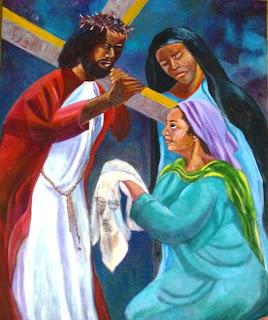 Marigot is small (given it's the capital) but there were lots of great restaurants, and sights... We enjoyed our exploring, but took very few pictures due to the frequent torrential rain showers - so you'll just have to take our word for it.. :-)
Posted by SV-Footprint at 5:12:00 PM