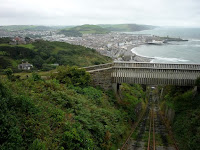 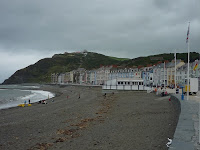 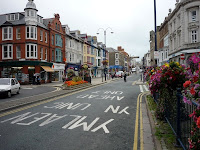 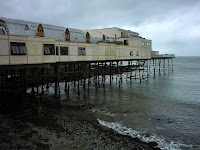 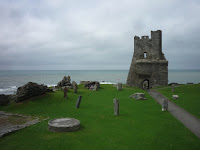 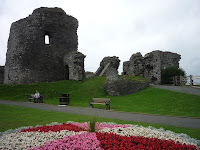 Aberystwth Scenes
[Kyle]The beginning of our stay ended up being so miserable, weather-wise, that we ended up spending most of our time aboard Footprint. Every time it looked like it was clearing up, we grabbed our things and, by the time we made it outside, it was pouring so back into the boat we would go.

Eventually, it got to where it was only raining a little, so we went out to have a proper look at the town. We started with the castle ruins, which were beautiful, well maintained and free to the public. Next to the castle lies a crazy golf course and, realizing I had never played crazy golf next to a castle before, I decided we just had to have a game. 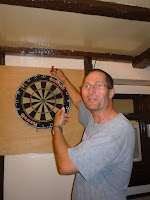 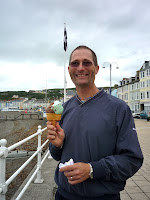 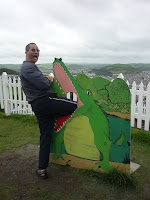 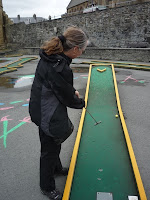 Fun in Aberystwyth
We followed that with a walk down the promenade carrying a suitably drippy ice cream from a place that must’ve packed a pint of ice cream on the side-by-side cone. I was glad we only got one. At the other end, we boarded what we later learned was the longest electric funicular in Britain (as opposed to the other one, I guess). At the top, we had a view of the entire city as well as the coast for a dozen miles on either side. We were hoping to get a view of Ireland, but it was a bit too hazy for that.

We headed back on an aimless, meandering route through the city that surprisingly spat us out right back at the harbor instead of miles away as we were expecting. The timing was perfect as it was just starting to rain hard again.
Posted by SV-Footprint at 5:48:00 PM

It's internet trite, but I really AM laughing out loud here!