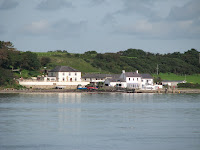 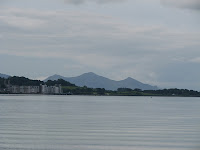 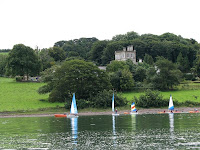 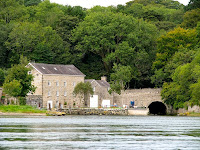 Menai Strait Scenes
[Kyle] We had intended to motor the rest of the way trough the Menai Strait to Conwy. The day before, I had checked all of my figures and gone into the harbor master’s office to find out if it sounded good to him as far as tides and currents and such and to ask about payment. In an offhand manner, he said our departure time sounded okay to him and then spent forever looking up the fee on his table. He eventually came up with £19/day plus £3 for electricity.

I told him we hadn’t used the electricity and he shot me a look that said he thought I was a liar. “It says here you got electricity!” he said, pointing at his sheet.

“Well, it says here you did!” He started craning his neck to see around me to see if we were plugged in. We weren’t.

Eventually, he only backed down when I explained that the boat had an American electrical system and couldn’t take British power.

The next morning, Maryanne went in to pay and came back (not knowing about the conversation I had had with him the day earlier, except that she needed to take £38) and said she had practically got into an argument with him. He had taken forever looking up the rate and came up with £22/day plus £3/day for electric - a total of £50 or around $80 for two nights stay. When she said we hadn’t used electric, he wouldn't believe her. Eventually, she just refused to pay it, and handed over the £44 fee without electricity. Wow, the guy who checked us in when we arrived - Mark - was sooo nice. We miss you, Mark. Anyway, we left at the appointed time, not sure we'd be welcomed back again, nor if the Police were already being informed of our imaginary electricity theft.

It was a beautiful sunny morning with almost no wind. We wound our way up the Menai Strait passing tidy little villages with boats moored below. As we passed the beautiful stately home of Plâs Newydd, near the town with the longest name in Great Britain, here it is, ready: Llanfairpwllgwyngyllgogerwchwyrndrobwllllantysiliogogogoch, or Llanfiar P.G. for short, the current started increasing rapidly against us. By the time we made it a couple miles further to the Britannia Bridge, it was near 6 knots and we were hardly moving.

Just in the other side of the bridge is an area called The Swellies. It is the narrowest and shallowest bit of water in the whole strait and, as such, has the strongest currents. It was just after high water, but the current was really killing us. We later found out slack water was about two hours before high water. We should have known that given the nature of the channel. Think of a wave. Water at the crest moves forward, water in the trough moves backwards. It’s the water halfway in between that’s stopped. The current at The Swellies increases about a knot per 10 minutes after slack water until reaching its peak. {Maryanne: Even I don't understand what Kyle's saying here... But generally high tide coincides (give or take 30 mins) with slack water, but not always, and in this case certainly not. We'd made a classic mistake, and although our decision was confirmed by a local, we were still wrong. Here the current flows around the island of Anglesea and from both directions at once along the Menai Strait, meeting somewhere in the middle and making the Swellies very difficult to "guess" at.}

Initially, my plan had been to just make it over The Swellies to the milder current on the other side, which was soon predicted to reverse in our favor. We approached the narrow channel under the Britannia Bridge and just stopped moving in the strong, swirly current. I increased the engine rpm from our normal cruising 2800 to 3300 (red line is 3400), and we gradually pulled away from the bridge at about half a knot. We got about another 1/4 mile before the current finally eroded that to the point where we were just hovering in place. We were stuck. We couldn’t get through.

Defeated, I finally pulled the poor overworked engine back to idle and turned around. We went back under the bridge at ten knots in idle forward. At Llanfair P.G. we considered picking up a mooring for the night. We were giving each one a good look over when we noticed a guy on one of them in an old lifeboat. He told us they were all available, but that they hadn’t been checked in a couple of years, so they might not be too secure. We thought about it for about half a second and decided to give them a miss and go back to one of the moorings in front of Plâs Newydd. When we got there, I had to use 1800 rpm just to stay in place while Maryanne secured the bridle. The current, even there, was now up to 3 knots.

We got all secured. Maryanne looked up the number for the house. She called them and explained our predicament to someone very nice who said the mooring was private, but she was pretty sure the boat using it was in the shop with engine trouble. She said she’d call the owner and ask if it was alright and call us back if it wasn’t. We’ll call back in a while just to be sure but, so far, no bad news. I hope we get to stay, the view is fantastic. 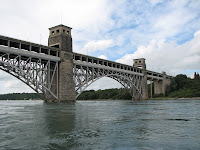 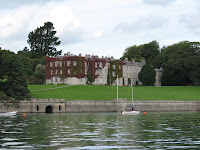 Our terrible failure in planning a passage through The Swellies, left us fortunate to find a pretty cool temporary home
Posted by SV-Footprint at 11:47:00 AM

Wait. I'm going to have to spell-check you on
Llanfairpwllgwyngyllgogerwchwyrndrobwllllantysiliogogogoch

Yep, you got it right! Bravo..