[Kyle]In the morning in Argostoli we had a breakfast of Tyropites (very flaky cheese pies), followed by Baklava so dripping with honey we practically had to jump in to get cleaned up afterwards. We needed to make sure we were properly fueled for the next leg - a 24-hour trip inland through the Gulf of Patras into the Gulf of Corinth.

We pulled up anchor from Argostoli just before midday. Just out of the main harbor, we turned into the sound bisecting Keffelonia, raised the mainsail and had a fast downwind sail out into the open Ionian Sea. As we rounded the southern side of the island, the wind bent with us so that we stayed almost dead downwind for the 25 miles or so it took to clear the southern tip. On a couple of occasions following a slight change in course, I unrolled the screacher, only to have it flogging away ineffectually in the turbulent lee of the mainsail a few minutes later, causing me to roll it back up with almost no loss of speed.

Passing the southern tip of Keffalonia into the lee of the island, the wind slowed and swirled with maddening unpredictability. Seas coming around each side of the island met and clashed in a messy jumble with no discernible pattern. What followed was about four hours of the most aggravating sailing I can remember. Footprint bounced and fell of the random waves, her mast swinging around in the equally swirly winds like a loose fire hose. The sails slatted and slammed one way and then the other. Everything, every single thing on the boat shook with the strain. I hate this kind of thing. It makes me worry about every single part of the boat that’s working against another, which is all of them. I was fully expecting mast fittings to start pinging on deck before splashing irretrievably into the water. Perhaps it would be a loose stitch in one of the sails, quickly spreading across to the edge. Motoring might have got us out of there faster, but it also would have made the pounding much worse, and probably only slightly less pointless. We had no choice but to wait it out. Keffalonia is a big island with very high mountains. We were more than 10 miles away before the wind came back and started stabilizing, taking us finally into the Gulf of Patras.

I held out as long as I could, but by midnight, I was ready for a rest. Maryanne took over with surprisingly good cheer, considering the hour, and didn’t stir me until four. I had been having weird dreams anyway, and was glad to be back on duty.

About halfway across the Gulf of Patras, the wind became negligible. This was in line with the forecast, so I assumed we were done sailing and reluctantly started the engine. The wind gradually picked up again as we approached the Rio-Antirrio bridge at the narrow spot separating the Gulf of Patras and the Gulf of Corinth. I assumed this was a result of the narrowing of the available space for the wind and that it would die down on the other side as the land widened again. 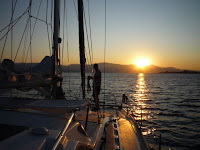 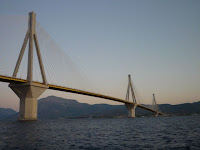 A Greek Passage - that is a VERY impressive bridge (engineering wise) designed to cope with earthquakes, tsunamis, and the ever widening channel
We got to the bridge right at sunrise, where we strangely found ourselves dodging several ferries going each direction. Why on earth would there be need for so many ferries when there was a perfectly good bridge right there? We could see cars and trucks on the bridge and eventually decided the ferries must be filled with big semis – lorries – none of those up there.

After the bridge, the wind did not die, but only became stronger. Once I realized it was there to stay, we shut down the engine, unrolled the genoa, and had a really peasant morning sail up the gulf. The Gulf of Corinth is bounded on both sides by high hills and is narrow enough to see both shores at once, although not the ends. If the hills weren’t a little too arid, I could have easily mistaken in for Loch Ness.

I had originally planned to anchor in the harbor at Nisis Trizonia, the only inhabited island in the gulf, but instead, we made our way to the smaller uninhabited island to the east, Nisis Áy Ioánnis. Nisis Áy Ioánnis was billed as a lovely anchorage in settled conditions. The wind was forecast to die off to nothing so we dropped anchor off of the lone beach in 2.5m of water. My next order of business was to dive in and check on the anchor. It turned out we were in a bad spot. Our anchor was hooked under a big rock, which would hold us well as long as we didn’t swing. We were a little too close to a coral head, which we only had a chance of clearing if we pulled the rudders up and across which I didn’t want to drag our chain.

We decided to move a little further back. We set the anchor in 7m, where it quickly buried itself in deep sand. Our chain trailed back, eventually hanging over empty space as the island ledge dropped out from beneath it into the lightless depths. 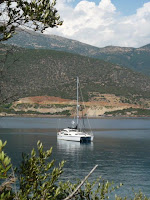 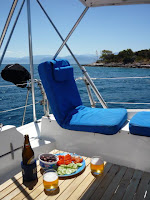 Relaxing at our new back-yard
The calm did not arrive. Instead, the wind picked up to thirty knots and stayed there for the rest of the day. We didn’t drag off of the shelf. We held steadfast and rode it out. Waves crashed on the nearby rocks. We ate dinner out of our laps because the waves pounding the underside of the bridgedeck threw everything off of the table.

In the morning, we were in a different world. The wind had gone and the waves with it. We were as still as if we had been resting on a concrete foundation. After a couple of doses of Maryanne’s all-natural alternative to coffee as a remedy for early morning grogginess – “Just go back to sleep, Honey.” – I awoke ready to take on our busy day.

The first thing we needed to do, following a nice big breakfast, is have a swim in the lovely clear water. We took the plunge at the exact moment when it was getting too hot on board to stand anymore. We then circumnavigated Nisis Áy Ioánnis by flipper. The distance was maybe two miles, but it seemed less strenuous than that. It felt very much like a casual stroll though the park. We held hands for much of the way and were constantly stopping to point out one thing or another to each other, unable to chat much in this silent, underwater world.

Sea life in the Mediterranean is thin compared to some other places we’ve been, but there was still a lot to see. The find of the day was when Maryanne spotted a lone clam that had been missed by divers and fishermen that was about 8” across, feeding in the grass.

At the other side, back in sight of Footprint, We traded or flippers for flip-flops and made short work of the island’s trails, which rewarded us with pretty views of the gulf in both directions. This got us hot enough in the mid-afternoon sun to be looking forward to the swim back to the boat for an afternoon at a pace all afternoons should have. We lounged in the cockpit and watched the world go by.

As the afternoon turned into evening, Maryanne, while preparing dinner managed to unwittingly utter what must be one of the least comforting phrases a person can hear coming from the cook: “I really hope this is cheese.” She had gone to the store in Argostoli for provisions and had come home proclaiming that the labels, “were all Greek to me”. Ah, the hazards of shopping in a foreign country. 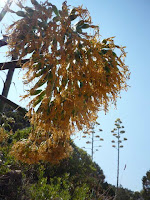 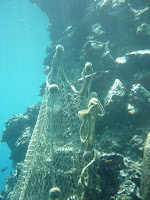 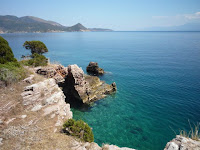 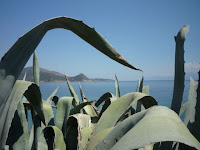 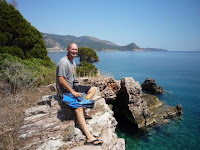 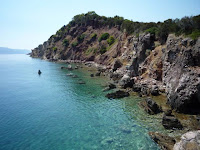 Exploring our new back yard
Posted by SV-Footprint at 2:50:00 PM

i have been watching Gemini Catamarans for about two years, and love them. I am planning to have one soon...

I just learned that you are heading east in Med, and i hope Turkey is in your plans too.
Although i am leaving in Ankara (far from the see!...) i would like to visit and welcome you in my country if possible. If you have any need and/or question about anything, please let me know... I would like to help...

hope to hear from you soon...