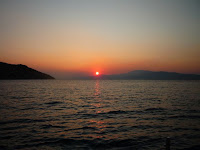 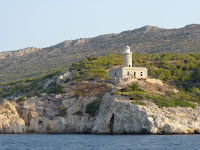 Sunsets and views on route to Athens
[Kyle]We pulled up anchor at Kalamaki during the normal morning calm, and then began to drift in the direction of Athens. During the course of the day, the wind picked up until we were chugging right along.

In order to break up the trip, we anchored in the cove on the southwest corner of Salamina Island, about 2/3rd of the way to Athens. It took us several attempts to get the anchor to set in the thick weed, but once we were secure, we had a pretty uneventful night of watching Greek families cooling themselves off at the beach.

In the morning, I had the satisfaction of sailing off of the anchor. We did this really cool manoeuvre where sailed backwards into deep water, did a turn to straighten ourselves out, and then headed out forwards as if we had backed out of a driveway. {Kyle had a suitably smug smile on his face for at least an hour!}

The subsequent trip into Piraeus (the most convenient port for us to Athens) was windy, fast and increasingly congested with fast ferries and big cargo ships of all kinds.

We pulled into Marina Kea, where a young guy in an aluminum tender directed us to our med mooring. It wasn’t until we got settled in that we realized how desperately we had needed to recharge with the abundant services of a big marina. We spent the next couple of days running around at full speed trying to get everything done before the arrival of our friends, Kate and Mark. It had the feel of a haulout without the actual haulout.

We used their power to charge everything we could think of until it was full, full, full. I cleaned, flushed and refilled our water tanks and then gave Footprint a good scrubbing in and out. I hadn’t realized how filthy she had become until seeing the streams of brown water running off of the much whiter decks underneath. The marina didn’t have laundry, but with our hose hooked up, I was able to do bucket loads of laundry, which dried in the Greek heat faster than it would have in a tumble dryer. 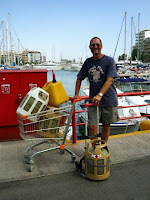 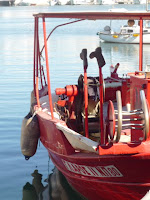 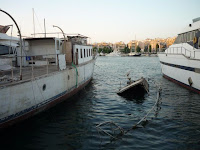 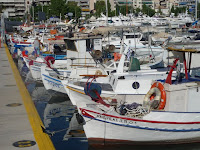 A loaded cart for refilling tanks! Marina Zea - boats of all kind

We rented a car. We did this primarily so that we could drive from one LPG station to another begging the attendant to fill our propane tanks. What an experience that was! Maryanne often blithely tells me she filled the tanks while leaving out the actual agony of the process. Since we have American tanks made out of see-through fiberglass that are bristling with adapters, she often has a hard time getting them filled. A lot of filling station attendants look at our tanks with a great deal of suspicion and send her off a couple of times before reluctantly agreeing to top the tanks up. Having a chance to observe this first hand, to me, the experience seems to resemble buying a car. They start off with “Absolutely No Way!” Then, when we turned to leave with hangdog looks on our faces, an attendant ran up and told us to return the next day. When we explained that we only had the car for one day, we were sent away again. This process repeated itself over and over again until we were finally told to back the car up to the pump. Whew! It still wasn’t over. Every time we had to go through the time consuming process of changing our adapters from one cylinder to the next, the attendant, which had grown to the entire staff, clearly wanted us to call it quits and leave. We then had to go through a slightly abbreviated version of the procedure above for each of our three tanks. When we finally pulled out of the station with all of the tanks full, we could hardly believe our luck. We spent the rest of the day on a high from having successfully accomplished the near impossible.

While we still had a car and while I was scrubbing down Footprint, Maryanne went to a five-story Carrefour supermarket, where she stocked up on everything that’s been hard to find since Preston. She ended up spending four or five hours there and bought three carts of stuff. I went with her on her last trip. The security guards were definitely keeping their eyes on us. Most Greeks go to the store every day or two and buy small amounts. They must have thought our changing cartloads were a ruse so we could case the joint. 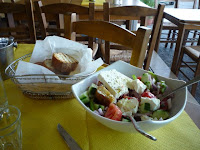 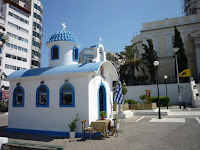 We had time to eat and explore too!
In the end, Footprint ended up clean and shiny and sitting low in the water from being fully restocked. We were ready for our friends to arrive.