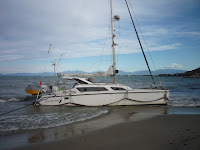 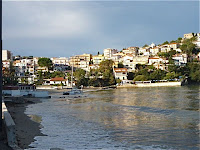 [Kyle]Checking on the boat in the morning, we had hoped to empty some water and recover more items to safekeeping. However it was clear that water was still rising in the boat as the boat sinks into the sand. Both hulls and the floor in-between were now flooded, almost to the seat of the sofa area. The batteries were underwater, and many items were floating around loose in both hulls. Water was entering the cockpit area from waves breaking on the side, and it seemed futile to empty water that would just replace itself.

We attempted to raise items out of further water ingress where possible and recovered more essential/critical items (as much as we could manage).

During this exercise several of the key players from the weekend recovery team stopped by and advised us that the owner of the beach property we were now laying outside of had complained that the lines were damaging to the property. Bruno had been passing by in the middle of the night, so he re-lead them all.

The aim for the day was to find accommodation and we are hoping for an apartment for the month (to find out later).

Based on information from the recovery team, the expectation was that the boat was to remain at its current site. On Monday morning a recovery attempt with floating pontoons (or balloons) will be made to the local harbor for haul out of the boat. From here we expect to wait for the surveyor before further decisions on repairs are made.

During the day, our little pile in Enzo’s spare room grew slowly. Enzo showed us pictures and told us stories from his 29 years as ship’s Navigator, most recently on a 240m LPG ship running between Alaska and Japan. He had fun practising his sights with our recovered Sextant, he's an expert since this is one of the many jobs he used to be responsible for in his merchant mariner days. The day ended with a film night at Pasquale’s and a dinner of lovely local takeout pizza from what they assure us is the best pizza place in town.
Posted by SV-Footprint at 5:42:00 PM