[Kyle]It was Kate (of the witty blog comments) who first suggested we go to Filicudi. She had read something about how it was virtually unspoiled and undeveloped and thought that sounded just like our thing, as if our thing was avoiding the crowds and having lots of trails to climb. Well, I suppose that is at least my thing. I’m not really a fan of overly posh resorts with Rolex and Chanel stores lining the waterfront. As if you can’t get that stuff anywhere anyway. Filicudi didn’t have brand-name anything, not even gasoline. 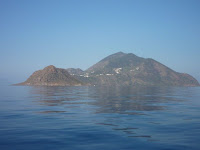 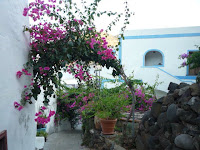 First views of Filicudi
We arrived after another windless bout of motoring, got secured and then headed out to see what’s to see.

Filicudi would be two islands if the sea were a few meters higher. The main island consists of several dormant volcanoes and is connected by a low, narrow isthmus to the uninhabited cone of Capo Graziano. We first climbed a trail of zigzagging stairs to the site of a prehistoric village high on Capo Graziano. The village consisted of about a dozen or so stone buildings on a leveled-out area near the top of the hill. We were able to pick out several homes, cooking and storage areas based on foundation shapes. There was no information posted, so we were left to our imagination as to what the roofs were made of, where the people came from and why they built so far above the sea. 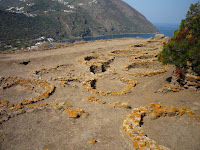 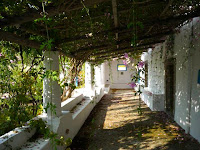 Filicudi village - Prehistoric and newer
From there, we descended and began traversing the isthmus toward the main island. Along the way, we spotted an information board just off the road. We investigated and found it was the site of a Bronze Age village just set back from the rocky shore. At this site, there was much more information about what each structure was and how it was used. The part of the site that had been excavated was a small portion of the large village known to have existed there. At the time, the island had a larger population than it does today. It’s hard to imagine what life must have been like for those people.

We followed the auto road up the hill into the towns. Town seemed to be an overstatement. There were a few clusters of houses, mostly abandoned, with almost no commerce evident (even the bustling grocery store was simply a mobile van setup for the day). It felt to me a lot like Nisis Thirasia in Greece. Most of the paths in town were narrow footpaths. The road went through, but it was still necessary for residents to traverse long distances on footpaths to get to their houses from the road. We explored the footpaths until we came upon the church that we knew from our approach of the island was pretty much the highest building. On the way back down, we found what seemed to be the only operating hotel on the island (being October, most had closed for the season), where we managed to look pathetic enough after the long climb to get them to allow us to buy a bottle of water and a beer each, even though they explained that the restaurant was for guests only. 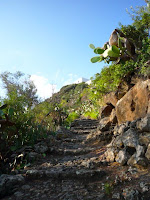 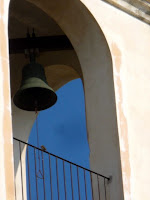 A sample of the village paths, and the church bell that requires a local to climb up and get a work out
Feeling we’d done pretty much everything to do on the island, we returned to Footprint for an early night. 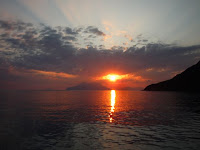 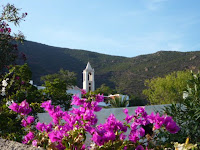 Sunrise behind Selina viewed from Filicudi - an early start to climb some hills for the views
[Maryanne]Filicudi does indeed seem less influenced by tourists than many of the other islands. The main incomers seem to be artists seeking out the peace and quiet. Mains electricity did not arrive at the island until 1986 (roads even later), which means if I’d have been raised there, I’d have lived my first two decades without it. It is hard to imagine my contemporaries studying with gas lamps or candles, and living in a 1st world country in such a basic way of life. Such a life seems both romantic and unnecessarily hard. Only the port towns are built on the flat bit of the island, and these are small. Most of the population lives in small clusters of homes embedded in the hills and the ancient footpaths take a primarily direct route; only on the steepest of slopes do they bother to switchback. It is a place for the fit and healthy and I’d imagine you lived a long life in Filicudi provided you managed not to fall off the edge of its many unprotected paths. It’s neighbor Alicudi is even more basic and is still roadless. Amazingly among the hills, the islanders have managed to level a patch of ground to use as a football (soccer) pitch; this is Italy after all and even if the Aeolians barely think of themselves as Italians, football is a national sport! Amazingly we spotted a few bicycles in some of the homes in the rabbit warrens of rough cobbled streets among the slopes and far from the roads – it seems incomprehensible that cycling anywhere on the island is possible or even sensible, but clearly the locals manage it; they must be very fit!

[Kyle]The next day, we decided to do the only obvious thing left to do on the island: climb to the very top. We started early. In spite of this, we were hot and sweaty by the time we had climbed back up to the church. From there, we joined the real trail to the top. 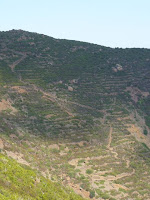 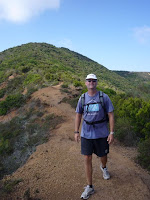 Can you pick out the stairs climbing that hill? Kyle enjoys a flatter section between two peaks
After a tantalizingly easy stroll along a dirt road with a mild grade, we found the trail that made its way up to the intervening ridge where we would join the next trail to the summit. Before us was a well maintained trail that consisted of stairs that went up as far as we could see. I don’t know why the sight of 5000 unbroken steps above me does not daunt me. I especially don’t know why Maryanne goes with me when I start the long climb, but she does.

After a very long way, we came to the ridge, which we would follow to the summit. Every now and then, it would level off a bit from the steep grade. We stated to think of these little breaks as a vacation.

It didn’t last long. Soon we were climbing again on a trail that was slowly becoming less and less improved. In several spots, we were shouldering ourselves through thick growth, following only the slightest hint of trail and being harassed by flies along the way. By the time we were in sight of the top, we were both pretty knackered and ready for it to be over. Maryanne was making noises about packing it in, but I managed to convince her to hang in there for the last few minutes until the cairn marking the summit came into view. 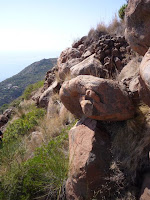 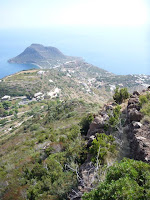 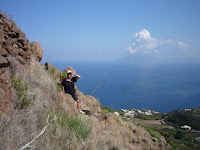 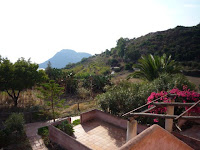 A hike for the views - so relieved to be back down to civilization alive!
Whew! We admired the view for a while, ate and drank most our remaining stores and started down. We took a different path down than we had used to get up for some variety. It turned out to be quite treacherous. For most of the route back the trail was steep and covered in rounded lava stones that acted like ball bearings over the hard rock below. We each had several instances of our feet coming out from underneath us, falling on our butts and sliding to a painful stop on the sharp volcanic stone, {Maryanne: 90% the trail was close (if not on) the edge with a long fall below, we stepped very carefully and it was quite a frightening descent.}

At one point when we were in sight of the paved road, we descended an almost vertical section of trail that terminated at a boulder overhanging 100 feet of air on three sides. After a couple of false leads that got more and more dangerous the further we got, we located the real trail. It was a near-vertical drop between boulders. Had we gone this way, instead of the stair route, we certainly would have lost the trail and given up.

It was with tremendous relief that we stepped onto the steep cobbled pedestrian trail just down the hill from the high church. From here, it was a familiar, if precipitous, descent trough a the narrow, winding paths of a very Greek looking part of the island

We were hoping for a pizza and a beer, but as well as being outside tourist season it was also a Sunday, the pizza place was closed and most likely for the. We did manage to convince one reluctant server at a sleepy cafe to at least sell us a couple of beers, which we enjoyed guilt-free before making the row back to Footprint. We had a nice refreshing bath and a swim before we went inside to relax and wind down. That’s when the exertion of the day caught up to us, and sleep swept over us.
Posted by SV-Footprint at 5:42:00 AM

well maryanne have you forgotten the girl guides / boy scouts motto Be prepared? dong a climb with no water? glad to hear you both made it to the top and back en=ven with very sore bums.
Mum

Oh Mum, of course we had water, and snacks, sandwiches, apples, etc... and I made Kyle carry it all

i'm glad you got to experience filicudi (i love saying that, Fili-CHEW-dee! is that right?), but wow, i don't know that the article i read represented the island very accurately. they made it sound just a bit more occupied & adquately equipped for the odd tourist. but the pics are beautiful, especially your sunset shot, and i'm impressed (again) at your fortitude in ascending and descending that hill - and intact! miss you guys!

I've still yet to work out when a C is pronounced ch and when not.