[Kyle]After a couple of weeks at anchor in Bristol Harbor, we were keen to actually sail again; chomping at the bit to get out of town, so to speak. My otherwise terrible work schedule did have a decent stretch of days off that we could use to put some miles on the log.

Since there had been no wind on our last leg into Bristol, we hadn’t yet had a chance to see Begonia kick up her heels now that we were freshly scrubbed and free of the previous winter’s bottom growth.

Our first leg didn’t really satisfy our need. The water in all of Rhode Island that day had only boat wakes to disturb the calm surface. It was nice to be going faster on one engine than we had been on two, but I wanted to go fast. 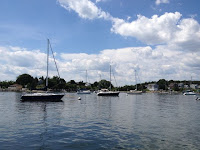 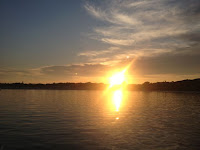 Calm waters as we pass by Tiverton (RI), and another great sunset (this time at Third Beach)

Fast would have to wait. We motored our way to the crowded anchorage at Third Beach at the mouth of the Sakonnet, and set anchor in the sand. We spent the rest of the afternoon watching families frolic on the beach and on their boats.

I took advantage of the clearer water to touch up my last bottom cleaning job. I was amazed at how fast the growth re-accumulated back in the healthy waters of Bristol Harbor. The main problem is the tiny shrimp-like criters. The little twerps quickly form a mat several twerps thick along with all of the crud that washes by. They are surprisingly strong and seem to be able to maintain a grip at speeds of up to five knots, which we have trouble obtaining without any wind and while dragging all of the shrimp. They also clog the speedwheel, making it read 0.00 all of the time. That drives me crazy. They brush off easily, but they don’t like it. They swarm after me like angry bees and I emerge from a cleaning job covered with them like a bee-beard guy. At least they don’t sting, but they do either bite or pinch. Luckily, they seem to flee from fresh water and they really hate soap, so I can get them off of me once I’m done, but it makes for a really nasty job.

We had all day to get only a few miles the following day, so I was determined to sail in the practically windless conditions no matter how long it took.

It took all day. I think we got up to three knots once, but we spent most of the day on either side of a knot in about half again as much wind. Only a favorable current saved us from motoring. It took the air flowing past us ten seconds to get from one side of the cockpit to the other. I was amazed the sails could make use of it to push us along, no matter how slowly. It certainly didn’t feel like a “breeze”. It was hot! Just in case Maryanne’s skin stopped working, I made sure I gave her the full report about how hot it was every couple of minutes so she wouldn’t miss it {Maryanne: Oh, how I appreciate the regular weather updates!}.

At great length, we finally arrived at our anchorage at Dutch Harbor, grateful for the brief breeze generated by the engines for the last couple of miles. The Athena is set up so that the port engine has to be running for the windlass to work. Starboard just makes it easier to control. We like to get the engines warmed up and run them with a load every start. They’ll last longer that way, but it means we usually motor the last couple of miles. 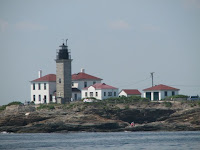 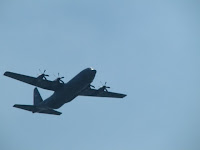 Dutch Harbor Lighthouse, and one of the many planes that seemed to buzz by throughout the day

We found a spot we liked clear of the mooring field a couple of rode-lengths away from the only other boat around. It was close enough that it would have been awkward not to wave, but too far to yell so that we would each have our privacy.

I waved and just got a stare in reply. He must not have seen me. I waved again. Another stare. Maryanne tried it. Nothing. When his companion came out, we tried it all over again on her. Still nothing. Oh, well. Good thing we’re so far apart.

It started to cool off as the sun got lower in the sky. Maryanne made dinner and we ate in the cockpit, conversed and then enjoyed a beautiful sunset over a glass of wine. When I got up to clear the table, I noticed that our neighbor was only about two boat lengths ahead. They were apparently on an all-rope rode. When the current reversed, they had drifted all of the way to the other side of their anchor. Without the force of any wind, Begonia just pointed into the current and stayed essentially in place, laying to the last twenty pounds of chain.

The guy was out in the cockpit grilling. He spotted me and yelled, “Hey! You think we’re a little close?”

Etiquette dictates that the first boat to anchor has the right of way, so to speak. If he insisted that we move, we would have to move, which I really didn’t want to do because it’s a huge pain in the ass. His snippy tone hinted that was where he was about to go with it.

“Oh, no, it’s okay.” I responded. “Our anchor is way back there.” I helpfully pointed at our trip-line floats. “We won’t get any closer to you than this.”

He stared at me for a second. I was hoping he was taking in the logic of my argument and not about to make his own counter argument. I had more waiting just in case about how I measured him at 500 feet away on radar when we set the anchor, but if he wanted to push it, we were going to lose.

Instead, he muttered, “I’m just sayin’…” and disappeared into his cabin.

It was pretty clear that his real objection was our very presence in the first place. He just wanted the whole place to himself. That’s not really reasonable in Rhode Island, which is chock full of boats. I was honestly surprised three of four more boats didn’t join us as the day ended.

I waited in the cockpit a bit longer to see if he would come out to continue the debate. I half expected him to be naked apart from the hat (see: To Norman Island, BVI, April 2009) he had that kind of vibe about him. Instead, he stayed inside, so I figured we got to stay put.

At sunrise the next morning, I got up to find the other boat miles away with the current going the other direction. Shortly after, our antisocial neighbor began pulling up his anchor. They were gone by the time the kettle started whistling. I had the urge to go on deck and wave a big, happy goodbye, but they were going the other way and probably too far away to see me anyway.

A couple hours later, we lifted our own anchor in a building breeze. Since it was such a nice day, we tacked the wrong way for an hour or so just for the fun of being out in a sailboat on a sunny day. We turned downwind. The wind continued to build and by the time we passed our anchorage, we were really starting to move. Take that, shrimp!

By the time we reached the north end of Conanicut Island, we were solidly in the nine to ten knot range. We were tearing a hole in the sea! I must admit, I probably took a little too much pleasure in passing everything going our direction with sails, but it was such a beautiful, perfect sailing day and it felt good to know we had picked such a capable boat. 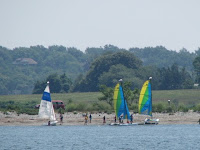 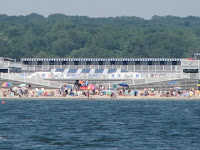 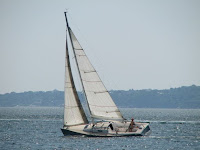 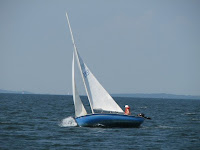 We were having so much fun that we decided to keep going past Bristol and anchor in the Kickamuit River, farther to the northeast. The Kickamuit has a very narrow, shallow entrance channel filled with moored boats to negotiate, but once passed, it opens up to a big almost empty “lake”. We anchored all alone in the middle of it and were treated to yet another beautiful sunset. 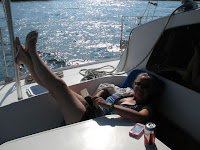 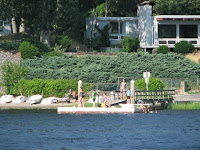 Relaxing and play time for all

By morning, the winds of the previous day were dying down. We left early and spent a couple of hours tacking ever more slowly towards, and then through the Hope Bridge. By the time we made it close enough to start the engine for the anchorage in Bristol, we had pretty much come to a stop anyway. What a great few days. It was a shame I had to go back to work.

Wait a minute, I didn’t!

For Part 2, we had a few days cruise planned aboard Sotito.