Passage to the Chesapeake: Part II

[Kyle]In Block Island, we pulled up anchor in the pre-dawn darkness about an hour after the wind began shifting from southwest to northwest. Knowing we would need some protection from wind, rain and spray at sea, we had installed the forward half of our cockpit enclosure. From the helm position, reflections of the lights ashore as well as hundreds of anchor lights reflecting off of the clear vinyl windows made it hard to tell what was ahead and what was behind. The added glare from the instrument lights on the panel made it pretty impossible to see where I was going. I focused on spotting big things with the radar while Maryanne piloted Begonia out of the harbor from the bow by using a bright flashlight to spot hazards and then radioing me turning instructions via walkie-talkie. It was a real edge-of-our-seats departure as we were both worried that a critical instruction would be missed or misunderstood.

It was a relief to simultaneously make it out of the crowded harbor and start seeing the world filling with pre-dawn twilight. We raised sail with a reef in each, shut down the engines and Begonia shot southwestwards into seas left sloppy by the previous day’s blow. Although the wind was from directly abeam, our forward motion moved it ahead until we were almost close-hauled, keeping the cockpit comfortably in the lee of our half-enclosure.

We were going beautifully fast, but were a little close to the wave train direction for the sailing to be comfortable. Begonia was rolling pretty wildly, with every twentieth or so being just big enough to knock something over or require quick bracing to keep from being thrown off the seat. Every now and then, a wave would break just at deck height, exploding into spray and sending a flume of water backwards. The biggest one of these broke right over the top of the cabin as Begonia was rolled into it by the previous wave. The wave was probably only eight feet high, but it sent a stream of water back that submarined under the snaps at the bottom of the cockpit enclosure and soaked me from below with up-going sea water. Then I got rained on by all of the water that hit the inside of the canvas above me. I was glad I had been wearing raingear.

As we sailed off of the shallow Montauk Shoal and into the deeper water south of Long Island, the sailing smoothed out somewhat. It was still rough enough that we cancelled Maryanne’s plan of cooking lunch. It was hard enough to hold on in the galley, much less cook. I certainly didn’t want to do dishes. We settled for peanut butter sandwiches.

By dinner, things had settled down enough that Maryanne was able to make us a delicious chicken curry from a recipe she made up on the spot using what she had available. So far, there had been no hint of seasickness so I gobbled it up greedily.

We had another spell of really rough conditions for an hour or so before the wind shifted to the west for a few hours, and then shifted back. The waves being pushed ahead of the wind arrived from directly ahead, making for a confusing mess when added to the existing beam seas. I went off watch just then, but had a terrible time trying to sleep between the violent motion and the alarming noises.

It was a few hours before the motion suddenly eased into a gentle rocking and I fell fast asleep. An hour later, Maryanne woke me up for my watch. Ugh. The downside to being on a boat with only two occupants is that you can’t just say, “I need more sleep. Come back in an hour.” Maryanne needs the chance to sleep just as much as I do and the only way she can get it is if I’m awake, so I got up. The bummer was that it was still too rough for the first couple of hours to be trying to make coffee and then balance and time the sips right in the hope of not spilling it all over myself. {Maryanne: Not too rough, I did manage to turn last night's left-over curry into a Caribbean style roti for breakfast}

The good news was that, in spite of it being just a little rough, we had been moving fast since putting up the sails the day before. It wasn’t until the wind started decreasing twenty miles before the Delaware Bay entrance that our knotmeter finally dropped below nine. I was thrilled since the next couple of days were forecast to have very light winds. I had expected to go fast for the first half or two-thirds of the way and then spend another whole day crawling the rest of the way in light winds. What had been planned as a two or even three-day passage had taken one. In our first twenty-four hours, we sailed 221.8NM. Footprint’s record was 186NM while crossing the North Sea in close to ideal conditions. Since conditions have to be sustained and favorable, 200NM days are pretty rare in cruising boats. We generally plan 100-120 to allow for periods of light wind. I’m hoping that someday they become commonplace enough for us to become blasé about it, but for now I’m still excited about breaking the elusive (and arbitrary) 200NM day again.

Morning came just as we made the turn northwest bound into the Delaware Bay. I went off watch for a couple of hours while Maryanne dodged shipping in the channel. Since I wasn’t sure we would be arriving in daylight, I planned to hug the main shipping channel in order to avoid crab pot floats on a more direct route through the shallows. This turned out to be a completely unnecessary precaution. Crabbing here must have a strictly regulated season. When I came through the previous September on the way to New York, it was hard to find a 21-foot space between floats through which to sail Begonia. In spite of my best efforts, I still picked up a few. The busy heavy shipping lane was the only safe refuge. This day, there wasn’t a pot float in sight anywhere the whole way up the bay. {Maryanne: Crabs actually migrate around the bay and between different habitats, and the crabbers know it... no need to put lines or pots out where the crabs aren't!}

The current began flooding up the bay just as we arrived. The currents in Delaware Bay are very strong and we needed to maintain our speed to be able to make it the whole length before we would be essentially stopped by the outgoing tide. We motor-sailed in the dying wind until the sails were no longer providing any help. The rest of the day was a long, boring motor up the middle of the brown bay in flat seas. 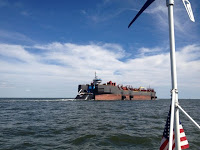 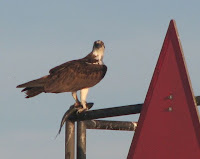 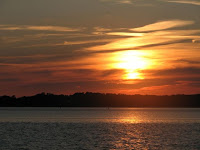 Wind had died, but there was the odd passing ship or Osprey nest to distract us before sunset

About five miles before the eastern entrance to the C&D Canal, the sun set, the current reversed and we slowed way down as we fought through the last stretch in the dying light. We entered the canal just as it got dark. There is a bit of a lag between Chesapeake and Delaware tides, so the current in the canal was still in our favor until we got to the other side. Maryanne distracted herself with making us California Rolls for dinner (and I surprised myself by enjoying them so much, requesting seconds, and then thirds... Yummy).

By midnight we were through the canal and really looking forward to a proper sleep. We had intended to keep going another fifteen miles or so to a favorite anchoring spot of ours farther down the bay, but a nearby cove in the Bohemia River meant we could be asleep with the checklist done before we would even get to the other one.

The Bohemia is very shallow. Since Prydwen, the Tartan 30 in which we’ve done most of our Chesapeake sailing, had a fairly deep draft, the Bohemia never made it onto our short list of favorite anchorages. Even in Begonia, there were a couple of times when I winced at the depth sounder as the shallow alarm went off. Most of the river is .6m (2’) shallower than the charted depth. The tide was dead low, though, so we shouldn’t have a problem getting out. The anchorage itself is a bit exposed for rough weather, but on a calm day it was just perfect.

At noon, we finally emerged from bed to have a look at where we were for the first time in daylight. It was beautiful. The large bay was ringed by homes we could never afford and lots of big trees. Sailboats were out with their sails up, going nowhere. The powerboats were out towing skiers and generally having fun. It made it a bit wakey, but it was still a lot smoother than a weekday in Weehawken. 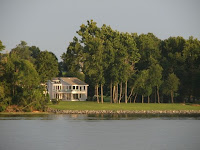 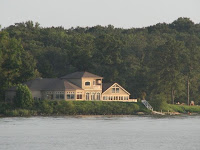 A nice anchorage at Veazey Bay in the Bohemia River, Maryland
Posted by SV-Footprint at 1:50:00 PM