A Lubberly Vacation From the Sailing Life

[Kyle]Once we had recovered from the long last leg to Norfolk, We headed over to our friends Kate and Mark’s house for a week ashore. They were taking a vacation to Martha’s Vineyard for a week and we had convinced them it was a good idea to let us sit house for them while they were out of town.

It was a tremendous luxury for us to have access to all sorts of things we didn’t on the boat: laundry machines, an oven and an electric toaster to name a few. Things were made even better by the weather. It ended up being rainy and horrible all week. While we were constantly nervous about how unattended Begonia was doing, (we checked on her often and she stayed put right where we left her) it was nice to be able to hunker down in a house. They even sweetened the pot for us by recording the last episodes of Breaking Bad that we hadn’t seen yet.

The centerpiece of their household when Mark and Kate aren’t there is their Jack Russell Terrier, Digby. Digby is friendly and impossibly cute. He appears to be powered by a small nuclear reactor, making him really hard to tire out. I took it as a personal challenge and made sure he got walked at least five miles a day, which for him is even more because he darts back and forth investigating smells and chasing squirrels, pulling on his harness like a whole husky team when one gets near. 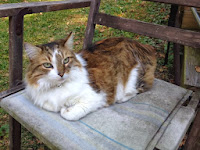 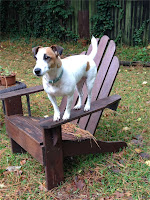 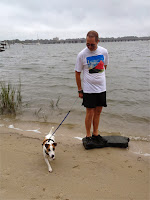 Our life can be strange. I suppose most people who live in neighborhoods spend most of their time in the same general areas amongst people who can afford roughly the same kind of homes. We seem to jump all over the place. It can happen so fast, that it’s a little disorienting sometimes. One day, we’re just being us on our boat, and the next, we’re on Andy and Robin’s yacht in Martha’s Vineyard. One day, we’re sailing along in our boat, the next; we’re walking a dog in suburbia.

Speaking of which, he’s getting restless and giving me “the look”. Kate and Mark got back yesterday, but they had to get right to work, so it looks like I have one more long walk to do before everybody gets back to normal.

Email ThisBlogThis!Share to TwitterShare to FacebookShare to Pinterest
Labels: Chesapeake, Off Boat Side Trips, USA-VA

I love that you have such diversity in your life and environment and it's good for you to have a little pet time. Jack Russels are cute as can be, but they have no internal organs, you know....just Mexican Jumping Beans inside.

It is impossible to capture how perfectly it worked out having Kyle and Maryanne in our home watching the pets for us while we relaxed on vacation. And we're so happy it afforded them with the chance to do things they ordinarily wouldn't be able to do, have someplace to deliver ordered items, get some laundry done, and of course catch up on excellent television viewing! It was a mutually beneficial arrangement to be sure! Digby is missing Kyle terribly, however. The "look" I've been getting lately is rather baleful, i.e., 20 minutes round the block isn't cutting it anymore. Love you guys!