Sailing conditions: [Good speed, we spend most of the time with 2 reefs in both sails - uncomfortable seas and boat speeds between 7-10kt all day - some great distances, but not so great on the comfort level aboard. ]

General Comments: [Remaining rudder remains fully functional (we are hugely relieved and hopeful it will remain so). Sailing at night (for my watch at least) is now moonless, and it is tough. It is hard to see anything ahead except the dark, we rely on any ships being lit or showing up on the chartplotter somehow, and we rely on the wildlife keeping out of our way (hopefully the whales have that memo too). We haven't seen any ship since the Royal Polaris, nor have we seen a plane. It feels very remote.]

Updates after the fact

At the beginning of my next watch, I was surprised to see a clear sky full of stars. The Milky Way, several star clusters and even a few nebulae were clearly visible to the naked eye. What surprised me was not that it was clear enough to see all of those things so far out into the ocean, but rather that they weren’t being washed out by the light of the full moon. There’s usually not a whole lot to do at night alone on a watch, so the brilliant night sky commands a lot of attention. Watching it carefully, I could see our progression over the curve of the earth’s surface manifesting itself as a slow change in the night sky. It scrolled over us as we headed west. Jupiter, Mars and Saturn were all where I expected them, but mostly I was expecting Begonia’s decks to be bathed in bright moonlight that I could practically read by.

I looked straight up and saw the moon’s disk, but instead of being bright white, it was a deep, dark red. An eclipse! I was so excited! I hadn’t even checked for an eclipse.

The deep red was the entire moon only being lit by sunlight passing through the earth’s atmosphere at the terminator – the line between night and day. From the moon it would have been possible to see all of the earth’s sunrises and sunsets at once. For the next hour and a half, I got to watch the earth’s shadow slowly leave the face of the moon, which turned yellow, then white, and then bathed Begonia’s decks in light I could practically read by. 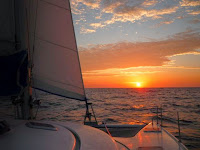 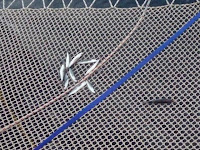 Things were pretty routine over the next few days. We had wonderful tailwinds, but for some reason were being hit with a big swell from the north right on our starboard beam. Begonia rolled erratically back and forth uncomfortably in the sloppy seas. Every now and then, an errant wave would crash into the hull like a boulder on a beach and explode into a wall of spray and drenching the person at the helm. They seemed to have the exact same period as the time it takes to get completely dry after being soaked by a wave. It was very frustrating. 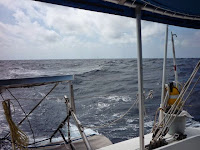 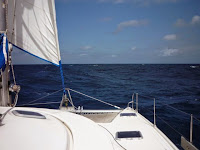 The sea state has been very variable for this whole trip

On day 17, Maryanne was doing her daily rig walk around (I do one in the morning). To make it easier for her to stay upright, I gradually turned Begonia into the wind and slowed to a stop, easing the motion considerably. Well’ I overdid it and the sails backed. There are two ways to handle this: The Quick Way is to run around the deck and redo everything about both sails. The Lazy Way is to turn the wheel hard to leeward, and then wait for the boat to turn 270° back around to the original heading. The Lazy Way is preferred, but can only be done in light winds and relatively calm seas. The seas weren’t calm, but I tried it anyway. I repeatedly got almost around before a wave would slap us back the other way to where we started. It probably didn’t help that we only had half the rudder authority. I persevered though, intent that laziness would prevail! It took thirty minutes, some of it going backwards, but eventually I found a wave that helped us and we were soon back on our way.

Except something was wrong. Begonia was not getting back up to speed and the rudder felt like mush. Uh, oh!

I tried this and that, but the problem persisted. My leading theory was that the remaining rudder blade was somehow spinning on the shaft, giving us only partial deflection. It also would mean the rudder was just about to fail.

I decided to jump in and have a look. As soon as my mask hit the water, I saw the problem: The feathering prop’s blades had been spun into the reverse position when Begonia was going backwards using the Lazy Way. Unlike forward pitch, when the blades are in reverse, they won’t feather by themselves. This meant we were dragging three big, flat blades through the water. This made for a lot of drag as well as bathing the rudder in the turbulence, reducing its effectiveness. The rudder was just fine. Whew! I spun the prop into feather by hand, checked the other one (still feathered) and for the first time saw the patch of ocean where our port rudder used to be. Yep, it was definitely gone.