Weather: [More of the same, mostly overcast and windy enough to be chilly]

Sailing conditions: [More of the same, mostly sailing with double reefed main *and* jib, seas are 'mixed' making for a wild ride aboard]

Food: [I did some baking yesterday and made both chocolate cake and cornbread... it wasn't easy with all this rolling around but somehow it came out OK. The jelly/jello I made wasn't so lucky and managed to empty itself inside the depths of my fridge... Not my brightest of moves I guess - sigh.

General Comments: [We've not seen any wildlife for days, it could well be all around us but with the seas so rough it is unlikely we will see much apart from the occasional bird, and the odd flying fish that lands on the boat after a great escape from some other larger fish (or possibly from Begonia itself). Our remaining rudder continues to function well for which we love it greatly.]

Updates after the fact... 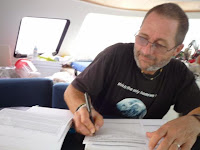 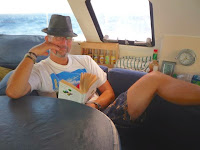 Kyle filling out the log, and then reading to me while I cook at sea. From this comfy location we can both still keep an eye on everything while sharing a little bit of time together each day

On day 23, we passed an interesting milestone; we found ourselves in a patch of ocean at least 1,000 nautical miles from the nearest land. It turns out there are only three regions in the world where this state exists. All of them are in the eastern Pacific. The smallest is a region west of the Galápagos, the largest is way down off the tip of South America, and we were in the medium one, between North America and Hawai’i. It is possible to sail around the entire world without passing through one of these regions. We spent 44 hours and 56 minutes in this one before we closed on less than 1,000 miles from Hawai’i, reaching a maximum distance of 1,160 nautical miles in the middle. I made a point of going on deck and having a good look around right at this point. I’d like to report that it was really dramatic, but the sea was indistinguishable from any other place sufficiently offshore to be out of sight of land. When I was younger, I would have assumed that it would have been really scary being way out here in the (really) deep end, so far from the edge of the pool. Now, as a more experienced sailor, I realize that it’s the boat that’s the edge of the pool. Shore, more often than not, represents danger from rocks and shoals and Italian beaches. This place had a comforting solitude borne from its lack of all that. Swimming out here all alone, with no boat in sight, THAT would be scary.

Right after we left the 1,000-mile region, I saw our first boat in 11 days. It was heading the other way and it’s AIS tag said it was going to Chile. They never answered their radio and they only got close enough for me to see the faint outline of the top of the ship, way out on the horizon. 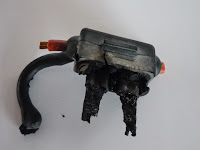 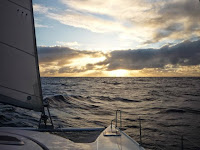 A smouldering fuse gives us cause for alarm (averted), and we continue to enjoy the sunsets aboard

We also had a scare that was fortunately minor. Maryanne and I both simultaneously smelled burning. We started investigating and I found a bad fuse in our solar panel circuit. Instead of overheating and opening the circuit, the fuse melted in such a way as to not lose continuity. It then just heated up until the whole rubber fuse case was smoldering. It’s likely that if it burned further, it would have interrupted the circuit and thus removed the source of heat, but it was scary nonetheless. I was able to fix it quickly by rewiring it with our electrical spares. Now we have yet another thing we check regularly. No problems noted.

Maryanne, you made cornbread! Wow - a little Southernism has rubbed off on you :) Even though I'm from Virginia, I'm much more interested in your chocolate cake. Kudos! Sorry about the jello - you should be commended for your cooking efforts, particularly since it's been such a rough crossing. So happy you're in the home stretch now! Thinking about you both & glad you're making good progress. xo