[Kyle]We knew that our next sail to San Evaristo was going to be short and in strong tailwinds, so we made a point of NOT getting up early. We stayed in bed until we were sure the sun was up and visible. We even got a little extra time because it had to clear the high mountains of Isla San José to the east of the beach.

The wind had built all night and leftover swell was starting to wrap around the point and roll us around. By mid morning, we were fed up with it and ready to leave. We turned away from the beach, unrolled half of the jib and shot down the San José Channel. The kayakers were launching right behind us. We wondered if we would see them in Evaristo.

The San José Channel is narrow and shallow. It is supposed be a great place to see dolphins and whales taking advantage of the increase in food concentration. All we saw when scanning the sea were whitecaps. The waves grew big enough for Begonia to begin surfing, which bumped up our speed a couple of knots.

Before we knew it , we came racing around the corner at Point San Evaristo. Turning across the wind was not fun. We rolled back and forth, got hit with spray and felt the full force of the 20kt winds. We were glad when we finally made it inside the harbor where the seas were flat.

Our relief was short-lived, though, because the harbor was full of other boats hiding out from the blow. We motored around a bit, measuring the gaps between all of the other boats with our radar. Once we determined there was not enough space for us, we decided to abandon Evaristo and continue south. It’s too bad. I was really looking forward to it. It was supposed to be a nice little fishing village with plenty of good hiking.

We unrolled half the jib again and continued south. We were now headed for a nice, big bay on the south side of Isla San Francisco, ten miles further.

By the time we got there, the wind was getting a little too high for stress-free sailing. We were starting to move psychologically into a state of heightened awareness, where we knew we had to start being especially careful about everything. We both went from thinking, ‘Oh, this is fun!’ to, ‘Let’s get this over with.’

When we came zinging around the point marking the west side of the anchorage, one boat after another appeared around the corner. Damn! The next protected anchorage was 27 miles further. We did not want to have to keep going.

By the time we were in full view of the anchorage, we counted thirteen other boats. We were not going to have our choice of spots. We tried the anchor in the first place, but it put us too close to the boat behind. If they left before us, we might have to move so they could get their anchor up. We motored around a bit more and finally decided on a spot behind all of the other boats. The water was pretty shallow there, so it may have been rejected by the monohulls with their deeper draft. There was a little swell there, but not uncomfortably so. The wind was forecast to slowly die to nothing, which should stop the swell. Being in the back with an aft-facing cockpit means we had an unobstructed view of the beach behind as well as the most privacy. It turned out to be a really good place to wait out the winds until we could go ashore and start exploring.

Once the wind was down in the morning, we went ashore to climb a couple of hills. 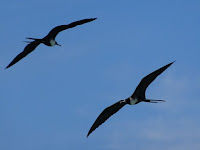 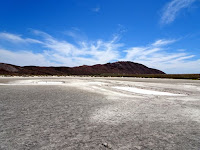 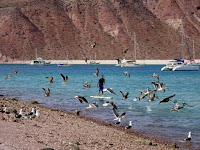 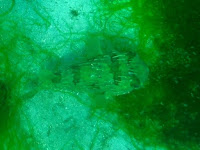 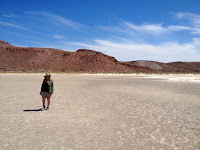 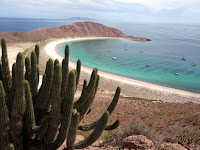 If the sea level were three meters higher, Isla San Francisco would be two islands. As it is, the two portions are connected by a wide salt flat between two opposite-facing beaches. We started by crunching our way along the crust of the salt until we found a trail zigzagging purposefully up the biggest of the two hills. After a while, the switchbacks stopped and the trail angled it’s way up and around the curve of the hill. As it did, it stayed just above a line of cliffs below. Without any intervening hill in view between us and the bottom, the elevation had the effect of making it look like we were floating high above the whole scene.

The trail continued to curve away until we eventually crested a saddle at the top of the cliffs, opening up a view of the anchorage. We could see where the sea grass lined up in rows over the white sand bottom. We could look down on Frigate birds turning in lazy circles and Pelicans folding their wings and diving in for a beak full of fish.

We descended, crossed the flats and started our second climb of the day. This one started out as a nice stroll up a mild slope until it intersected a ridge with a vertical drop off one side and a 45˚ slope on the other. We followed the cliff top, hopping over boulders in spots and being very careful with our footing until we made it all of the way over to the other side, where the trail angled steeply toward the beach below. 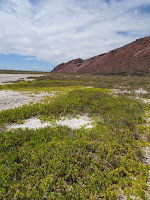 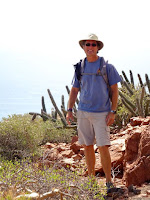 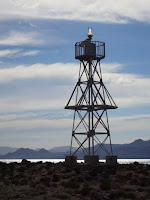 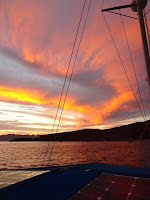 Once there, we walked along the shore, looking at shells and watching the birds eat their fill from enough minnows to feed them many times over.

Back at Begonia, I had it in my mind that I was going to spend the rest of the afternoon sailing the Pudgy around the anchorage, but once I stepped aboard and sat down, gravity took over and canceled that plan. Maybe tomorrow.

Maybe not. We each spent the night independently thinking up one little job after another that we wanted to get done. By the next morning, I had somehow managed to have a busy day planned. My first and main task was to dive under Begonia and give the bottom paint another scrub. The Sea of Cortez is such a thriving ecosystem that I seem to have to do this almost once a week. It’s nice that it’s so lush, but it can also be a real pain.

Any frustrations faded after I entered the water. A large group of Puffer fish were gathered in Begonia’s shadow. They’re such ungainly things – little boxes propelled by ridiculously undersized fins. They milled around in slow circles. Their dopey, nervous faces made them look a little lost. At one point, I counted forty-three of them before I lost track. For simplicity, I just named them all Timmy.

The water was a little warmer than it had been lately, so I took the time to do as thorough a job as I could on the scrubbing. I was hoping my cleaning might last longer if there are no patches of growth for new ones to gain a foothold. As I scrubbed, I got stung by innumerable varieties of tiny jellies that were clearly not happy with me. There were so many of them, I couldn’t possibly avoid them, so I just tried to keep an eye on the ones that were big enough to be visible.

When I finally made it back aboard, Maryanne was deep into some task. She was surrounded by paper and there was her and a computer in the middle. I decided to stay busy with the rest of my list until she ran out of steam and decided it was time to start winding down for the day, which came for her about an hour after I was ready.