Honeymoon Cove is both beautiful and well protected. It is also quite a bit smaller than we had imagined and it is deep which requires a long anchor line. When we arrived, each of the three one-boat coves had a boat already anchored. We tried to squeeze into several places, but we couldn’t get the anchor to bite into the thin layer of sand over hard rock. The boat anchored in the smallest, shallowest (but prettiest) cove had so many people aboard, it was unlikely they were planning to stay overnight. We sidled up next to them and asked if that was indeed the case. They said they were heading back to Puerto Escondido in a couple of hours. We thanked them and then gingerly eased up to the beach until we were getting pretty nervous about the depth and dropped the anchor. {The plan was that we’d anchor on a shorter chain and hang out with the boat until the other boat left, at which point we could let out our full scope and relax}

We backed down until the anchor stopped us just a couple of boat lengths ahead of the other boat. We then pulled in as much rode as we dared. Begonia was centered in a narrow channel that would only allow about a 20˚ swing if the wind shifted instead of the ideal 360˚ that we prefer. We didn’t feel comfortable leaving the boat unattended, so we decided to explore the island’s trails in turn.

I went to explore the trails first. We were close enough to the beach that I realized it probably would have been easier to just swim – or wade.

The trail left the beach and headed up the hill at a steep incline. Once it got to the first ridge, giving a view of the sea to the north, it split into various branches going to other ridges with other views as well as the tops of all of the minor hills. Along the way, there were several different varieties of prickly plants, many marked with descriptive signs placed by the Park Department. 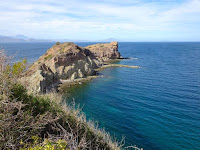 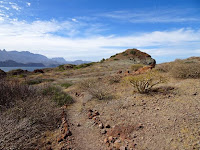 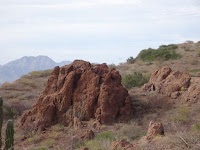 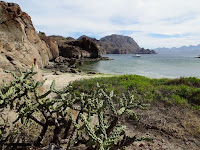 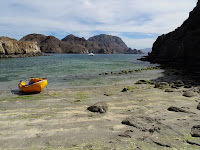 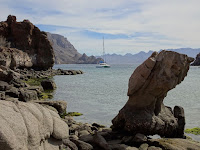 An well marked and easy trail with some great views

When I’d had my fill, I returned to hand the dinghy over to Maryanne. While she was gone, I went for a swim to clean off the beginnings of a layer of algae trying to cover our nice bottom paint. The water was still too cool for much else, so I avoided the urge to swim to the beach to row Maryanne back.

When she returned, she reported seeing a pod of about twenty dolphins herding fish on the other side of the island. The wind was picking up and they were using the waves to surf toward their prey. They put on a show for quite a while, which had her gone longer than expected. Her timing was just right, though. She got back just as I was climbing out of the water. 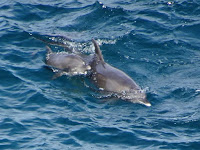 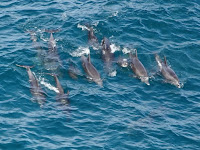 The wind was forecast to be very strong out of the north for the next day and a half. From that direction, the wind that wasn’t blocked by the ridge ahead would come down the hill and be channeled by our little cove toward us. That was good. It meant our chances of swinging were nearly nil. When the other boat left, we could let out the rest of our rode. This put us in a slightly wider part of the bay, but it also increased our swinging circle. After spending the evening in the cockpit keeping an eye on things to make sure we stayed put, we set an anchor alarm with the minimum possible radius and headed for bed.

The thing woke us up about twenty times during the night, always because the GPS accuracy would dip momentarily below our preset level. Every time, I would crawl out of bed to go out into the cockpit and shine a light on the cliffs to either side to make sure we were still centered. On one occasion, the alarm indicated that we were actually moving. I did my usual routine, but there were no cliffs. We were in the same spot - held by the weight of the chain - but we were turned 90˚, so the cliffs were in front and behind. The 18kt wind that was supposed to be keeping us in place was completely gone. We were just sitting sideways on flat water.

A breeze picked up and strengthened and Begonia gradually turned to face the beach as before. I was up for about an hour after that to make sure it stuck.

By morning, we were both exhausted. Begonia hadn’t even moved out of the limits of her original footprint, but we were stressed from worrying about it. We agreed that we didn’t want another day and night of being on edge about our swing, so we decided to leave early and use the wind to get further south.