[Kyle]Speaking of surfing in a gale…

We left Whangaparapara just as the weather was starting to turn nasty again in the anchorage. As soon as we cleared the bay, we were rolling in building seas. We turned downwind and verily flew to the southeast through Coleville Channel to the other side of the Coromandel Peninsula.

Once we got through, the wind turned and came from dead ahead, or at least it seemed to. What really happened was that it just stopped and our headwind was just us coasting to a stop. I cursed the weather forecasters for twenty minutes and then the wind came back and started to increase. This we were expecting and had already reduced the sail area by two reefs each.

It wasn’t long after I went below to get some rest that I heard Maryanne roll a third reef into the jib. It seemed like it wouldn’t have been a bad idea to drop the main entirely, but neither of us was thrilled about the idea of trying to turn upwind to get it down, so we decided to just leave it up and ride it out.

Normally, even if it’s not strictly warranted, we tend to throw in another reef when we start seeing speeds in the high eights and low nines. We spent a good portion of the night crossing the Bay of Plenty in the twelve to fifteen knot range with regular spells of surfing above that. The winds were twenty-eight or so, gusting into the low thirties. At those speeds, the primary noise is the sickening high shriek of the wind screaming through the rigging. We try to go as best we can about sitting out watches and off-watches normally, but in that noise, all either of us are really able to do is worry.

In the middle of the night, we passed close by White Island, New Zealand’s most active volcano. Everything we have read makes it sound like such a cool place to visit, but we weren’t about to stop. We didn’t even want to risk turning across the wind for a close pass. We had no interest in slowing down and waiting for daylight either, which would have just prolonged the misery. 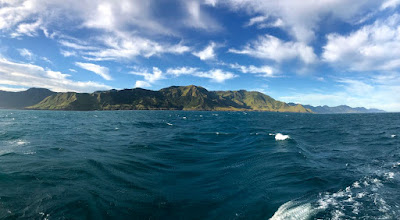 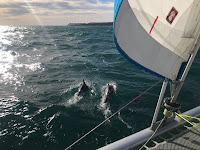 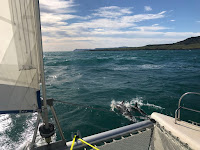 During the daylight hours we were able to enjoy the passing scenery
AND had several dolphin encounters!

Instead, we sailed on and by morning, we were approaching Hicks Bay in a dying wind. Hicks is the closest anchorage to East Cape, New Zealand’s easternmost point. The wind either splits or converges there, which meant on the other side we would have faced the other half of the wind that delivered us here, only going the wrong way. Our plan was to wait at Hicks for two days until the wind came from the other direction so we could resume our tailwind ride down the coast.

We were so beat up from the trip that we both thought it was all we would be able to do to stay awake long enough to do our Done Sailing checklist once we arrived. In truth, we were so wound up we ended up pushing through the day to a normal bedtime.

Hicks was nice. It’s big enough for a hundred boats to wait out the weather, although we were the only one there for our whole stay. The long, curving beach is set against a backdrop of steep green hills. Between the two is a sliver of a village populated by people who live way at the end of the road. Unless you’re on a sailboat, Hicks isn’t on the way from anywhere to anywhere else.

The next morning when we saw daylight coming through the hatch above our bed, we briefly considered getting up to watch the sunrise. I popped my head out long enough to confirm that it wasn’t spectacular and that we weren’t being blown onto the beach. We agreed that was sufficient cause for a nap.