[Kyle]We spent our first day at Alice Falls cowering within the safety of our cabin as we watched the sandflies swarming in the cockpit and occupying every surface, waiting for us to venture outside. As the day progressed, all of the water vapor produced by the galley condensed on the insides of the cold windows and hatches, preventing us from even taking in the lovely views. We didn’t dare even crack even a small hatch even a little to let the moisture out. 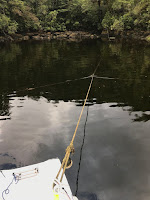 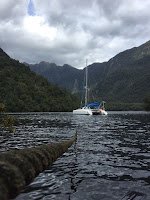 By the next morning, we had had it. Even though it was raining pretty heavily about half of the time, we decided we just had to get off of the boat. We covered every exposed inch of skin. The rain gear did most of the job, but we supplemented it with gloves, head nets and a coating of repellent for good measure. Then we sprayed a cloud of repellent by the door to discourage as many flies as possible from wanting to come in through the open door when we darted out. {Maryanne: Soon afterwards we actually fitted our bug net on the doorway!}

Our outfits were a bit confining, but it was nice to be outside. Our immunity from the pelting rain and the marauding insects gave us a certain smug satisfaction. One of my first orders of business was to tidy up the lines on deck, which I had skipped in my haste to get inside when we had arrived. Now I could take my time doing each job slowly and neatly while the local cloud of flies exhausted itself trying to penetrate my suit.

Across the main bay was a DOC (Department of Conservation) hut. There were apparently two trails running upwards from there, one to Alice Lake, the source of our falls, and another more difficult sounding one to Lake Katherine. We had already pre-decided we wouldn’t be attempting the Lake Katherine trail, but were going to try for the one to Alice.

We found a couple of promising candidates, but could never be completely sure we had found the trail to Alice Lake. George Sound is very remote (and wet) and the trails don’t generally see enough traffic to keep them from getting overgrown. We found several dead ends, but knew we would have a hard time picking up the trail going the other way, so we gave up on Alice Lake for the time being. 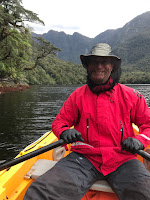 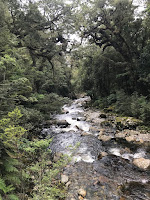 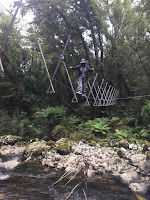 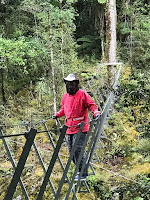 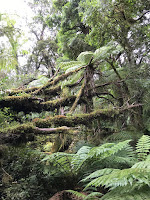 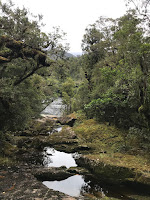 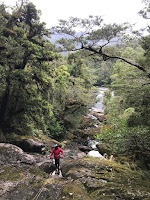 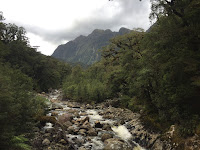 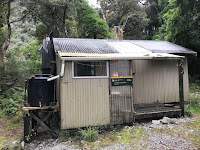 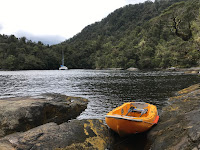 The Katherine Lake trail was another matter. It was a little more worn, but it had lots of the little red triangular DOC trail markers to keep us in the right place. There were usually one or two in sight each way at all times.

We didn’t have the desire to do the whole long climb to the lake (several hours one way), mostly because our sea boots aren’t great for the non-mud puddle part of hiking and because our less-than-breathable foul weather gear can get a little clammy inside when doing real exercise. We agreed on walking for forty minutes, just to get some fresh air, and then we would return.

It was actually a very pretty hike. The air smelled of wet earth and fresh rain and the rainforest was covered with all variety of dripping green mosses. Our wellies kept us from being concerned about splashing through creeks and finding unexpected mud puddles.

Just before we turned around, we could hear the sound of fast rushing water. We came around a bend and found an unexpected surprise: a steel cable bridge crossing a raging river.

The bridge was very basic. It was just three cables, one to walk on, one for each hand, and enough brackets to keep it somewhat stable. We each crossed just for the fun of standing on a wobbling single cable over the rapids. We imagined it would be a somewhat hairy experience crossing with heavy packs for the people hiking the whole trail. We looked at each of the three cables, which must have weighed at least fifty kilos each, and thought thankful and impressed thoughts about the people who carried them all of the way up there.

Back at the dinghy, we rowed back to the falls and decided to have another go at spotting Lake Alice – this time by scrambling up the rocks at the edge of the falls.

As she was getting out of the dinghy, Maryanne stepped on a piece of moss that gave way. She landed on her back and slid waist deep into the water under the dinghy before using it to stop her from going any further. She got just deep enough for it to come over the waistband of her trousers and run down the inside, filling her boots. We were right by Begonia, but she insisted she would rather continue on wet than go through the hassle of changing. We both knew that once we got inside and killed all of the flies that followed us, we wouldn’t be going back out.

The scramble to Lake Alice was steeper than the Katherine trail and we were soon both climbing in our own personal saunas. We made it to the ridge and found a vestigial trail, which we were able to follow to the lake’s surface. We emerged at a place where there was no view of the larger body or the falls plunging into the water near Begonia. That was a bit of a letdown. We carefully picked our way back down to the dinghy and returned home. {Maryanne: Amazingly as the trail finally met with the lake, there was a red Kayak there.. How cool would that be to then take a tour of the lake from the comfort of a kayak - however when we inspected it, there were some obvious holes where there shouldn't have been - so we declined the lake tour option!}

I was sooo wanting to get out of my outfit, but there was still hoisting the dinghy and some other outdoor work to do for our departure the next day, so I sweltered through those jobs while Maryanne set to changing out of her wet clothes and steaming up the boat with dinner.

Fellow cruisers? If you are thinking of a trip to Fiordland - see our Tips