[Kyle]We left Waikawa at first light for the long sail west across the Tasman Bay to Onetahuti Beach on the other side (by Tonga Island). The winds were on the light side, so we needed to allow for slow sailing. 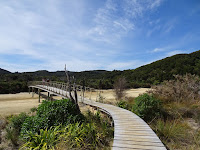 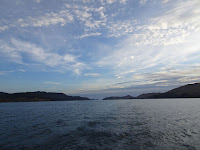 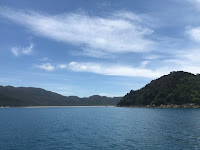 A pleasant sail with blue skies - my favourite! The early start - no so much.

We did better than expected and were setting anchor by mid afternoon. Onetahuti is only accessible by boat or the Able Tasman walking track. We had expected it to have a more remote feel, but there were four other sailboats anchored, LOTS of day charters disgorging lots of kayakers and plenty of hikers, which they call trampers here.

We didn’t do much after our arrival, due to the early wake up and the long sail. We made up for it the next day, though.

As "first thing" as we could manage, we had the kayak in the water and were pulling toward nearby Tonga Island for the requisite circumnavigation. They have lots of shore birds perched on eroded rocks. None of them seemed threatened in the least by humans and they were happy to let us get within 3 meters or so before they would even start looking like they were thinking about giving up their seats. Tonga is also home to a colony of Fur Seals, the few remaining this season seemed equally nonplussed by our approach. 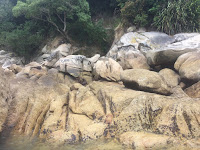 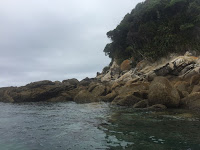 Circumnavigate Tonga Island - can you spot the fur seals?

After a couple of hours poking into each rocky nook and tiny beach along the way, we finally returned to the big, golden stretch of Onetahuti for a walk along the local stretch of the Abel-Tasman Coast Track. 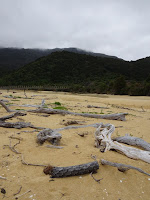 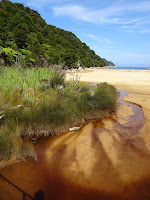 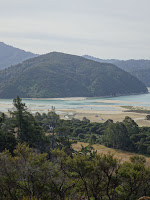 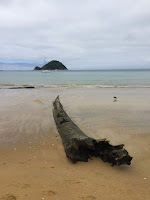 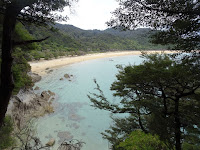 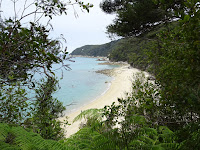 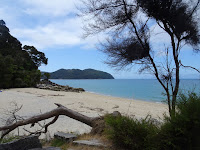 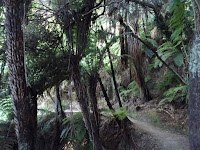 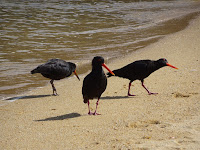 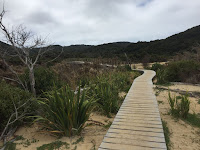 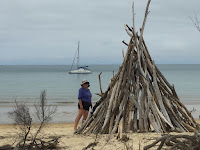 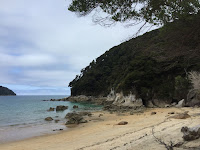 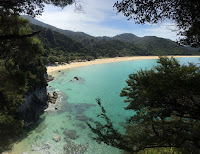 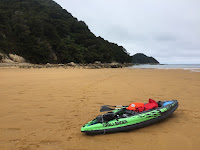 The track runs 6o kilometers each way from Mārahau in the south to Wainui in the north. The only road access between each end is at Tōteranui at kilometer 45 and lots of people use one-way ride services to get back from either there or the end. It is one of New Zealand’s most popular multi-day hikes. Onetahuti Bay is right at about the midpoint, around kilometer 30. This gave us great access to the meat of the trail.

We started our walk along the length of the long beach heading south. It is a beautiful arc of sand with lots of sun bleached driftwood above the high tide line. For a beach, there was an interesting mix of people. There were the usual and expected groups of people in bikinis and bathing trunks lying on the beach or splashing in the water (which was cool, but not freezing). Added to them were the kayakers, looking overly bulked up and uncomfortable in their ill-fitting gear per the requirements of their rental contracts. Most out of place, but probably most expected here were the hikers with heavy packs walking the beach in their thick boots on their way to the next beach or maybe the one after that.

At the southern end of the beach was the main campsite for the bay, which we passed through as we joined the trail towards Bark Bay. First, a note about New Zealanders and their trails: New Zealand has BY FAR the nicest trails we have ever seen anywhere. This makes the fit and outdoorsy New Zealanders just about as spoiled as you can be on a 60km hike. The trail is so beautifully maintained, it would probably be possible for some enterprising wacko to do the whole thing on a unicycle. At the campsites, there are running water taps and the bigger ones have “Kitchen Huts” with sinks and shelves for making it easier to prepare food for large parties.

We met several hikers, most of which were walking the track over three to five days. Most amusing was a group of four boys having a rest on the trail north of Onetahuti. They were most of the way through a 25km day and managed the neat trick of simultaneously bragging and complaining about their heavy packs. We learned from later young hikers going in the same direction that there were 26 of them in total scattered along the trail. They were all pushing for Bark Bay, which was going to be pretty tight in the remaining daylight. Further encounters seemed to reveal that it was some kind of organized trip – Summer Camp or some such thing. It was clear the mood of the group ran the spectrum between “What an adventure! Look, I found a bug!” to “This sucks! I am never speaking to my parents again!”

We passed one last kid, who only looked medium miserable, probably just really tired. With him was a wiry adult who looked like a triathelete. He was eating an apple with a big smile on his face, looking practically refreshed by his easy stroll.

He must have been the one responsible for the last of the stragglers, because after that, we didn’t see another soul on the trail for the two hours it took us to get to the viewpoint overlooking Awaroa Bay and then back to our kayak at Onetahuti.

The view was well worth the walk. Awaroa is very pretty and has a large sandy area where boats can dry out at low tide. With our camera’s super-zoom, we spotted a Gemini 105MC (the same model as our previous boat: Footprint) down there, safe from the chop in the bay. Next to them, a guy was walking out to his boat after checking his anchor. 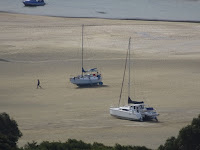 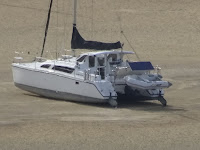 We didn't expect to see a Gemini out here! Shame we were too far away to say Hi!

We were starting to get a little sore on the way back, but we had the lovely distraction of the wilderness to take our minds off of it. Tui birds sang that song of theirs where they do multiple notes simultaneously as they flitted through a prehistoric forest where the ferns are so big they look like palm trees. Cicadas buzzed away and the earth smelled of fragrant herbs. When we finally made it back to Begonia, I suggested we get up nice and early tomorrow so we could do it all again. She just gave me The Look.