[Kyle]From Rere Bay, we went three whole miles to Oakura Bay, which is across the harbor from the main “town” of Whangaroa. I’m not sure if it actually qualifies as a town so much as a district with a name. There are about five businesses clustered by the marina and a couple dozen houses scattered up on the hills above.

The café next to the inn was the only one place open when we landed, so we popped in for a light breakfast of muffins, tea and coffee. We were going to go the traditional blueberry route, but instead had ham and cheese muffins made out of cornbread, for the sole reason that they had just come out of the oven and were topped with a layer of rising steam. Oh, my! Those were good muffins!

Not that we were all fueled up, we headed up the road to the trailhead for St. Paul’s Rocks, the main promontory that rises over Whangaroa. The hike was relentlessly steep. We had occasional showers along the way, which seemed perfectly timed to re-wet the grass and clay underfoot every time it was about to get dry. The traction was about on par with snow. To both of our surprise, even though we both slipped a few times, neither of us actually fell and found ourselves coated with mud.

Near the top, the trail follows a steep crevice in the rock that has chains placed for handholds. At the very top, we had amazing views of the whole southern part of the harbor. Between St. Paul’s and the Duke’s Nose, it seems like it would be possible for a cartographer to chart the whole beautiful bay. 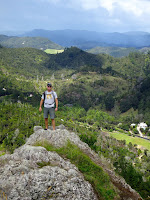 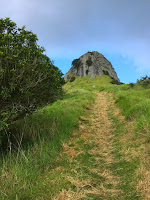 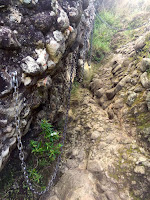 When we made it back down, we were going to top up some provisions at the General Store, but then we noticed the Fishing Club was open for lunch and they had pizza. That’s lunch sorted, then.

Once we purchased our provisions, we fell into “errand mode”. I got it into my head that, although we didn’t really need it, it would be a good idea to top up our diesel by buying a few containers worth. Maryanne decided to squeeze in a load of laundry while I ran back and forth to Begonia on fuel runs.

Maryanne completed our laundry with no problem (and had time to enjoy a wonderful long shower). I ended up descending into a rabbit hole of call center menus and clueless customer service people.

Like a lot of places in NZ, the fuel dock at Whangaroa has an unattended pump. Since the US is the very last place on Earth (possible hyperbole, but not by much) that doesn’t have Chip & PIN on their bank and credit cards, we sometimes have a hard time buying things. The American standard, we are told by the clueless people at our bank’s call center, is Chip & Signature. Even though our cards are the very rare and elusive Chip & PIN cards, they prefer we have the signature verified, so they have disabled the PIN feature as a convenience to us.

”How is that convenient?”

“Just have the attendant verify your signature”, we kept being told after repeatedly trying to explain the defining characteristic of unattended gas stations.

We eventually got them to agree to enable the PIN in the event nobody was able to verify a signature, like at unattended gas stations. Great! Now I can start pumping.

Nope. It turns out that US cards, unlike European (or AUS or NZ) cards, do not have the PIN embedded within the card. For a US Chip & PIN card to work, the machine has to make a call to the bank to verify the PIN we have on file. That works if the internet isn’t down, which the gas station’s call center guy explained to me was the problem. He told me they would try something from there, but they might have to get someone out to some switching office somewhere nearby to reset the system sometime over the weekend. Ugh!

While all of this was going on, some jackass in a big sport fishing boat arrived and bellowed at me to stop what I was doing and move my dinghy from the dock HE wanted (to a pretty much identical dock right next to it). I asked him if he could just pull in to the other dock. His response was, “Move your dinghy!!”

Fine. I’m on hold anyway. I’ve got nothing else to do. When I took his lines to help him tie up, he offered no thanks. He then barged past me and started filling his giant tank using his NZ card, which worked just fine. When he was done, he took the hose to the other tank and then resumed pumping. After that, he filled yet another tank. In all, he took on 1600 liters.

I was initially only a little annoyed, because I was waiting for the possible computer reset anyway. By the time they were finished, though, forty-five minutes had passed and it was getting dark and cold. I had been hoping to be done by then.

When he finished, he asked me if I had caught anything. I guess he thought I had been standing on the pier fishing. I pointed to my jerry cans, sitting next to the pump and said I had been trying to get fuel. He then just walked off without a word as if the conversation had suddenly failed to hold his interest. I suppose even New Zealand has to have one!

At least our laundry is clean.

The next morning, we were planning to hike to the top of St. Peter’s, the high spot on our side of the harbor. Maryanne took the kayak out to scout out a good spot to land and ended up at the pier at Totara North. She arrived home to tell me we could tie the dinghy up there and they also have a diesel pump, which is much closer than the one at Whangaroa.

We returned in the dinghy and pretty much immediately learned that the route to St. Peter’s was over private land marked with conspicuous Keep Out signs. As our consolation prize, we walked down the road to the trailhead for the DOC trail to the hut we had visited when we were anchored in Rere Bay. We didn’t have time to walk its full length, but we figured we could at least climb up to the high point for some exercise. The top was thick forest, so we didn’t get a view. We had to settle for a nice walk in the woods. 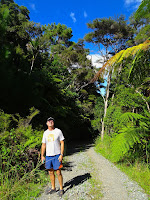 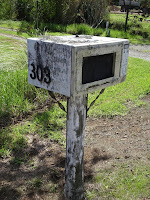 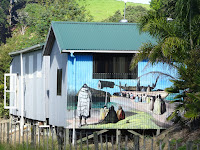 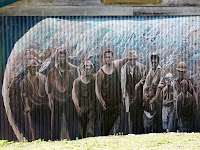 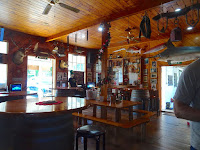 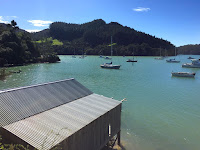 Around Oakua Bay and the 'town' of Totara North

When we got back down to the road, we headed the opposite direction from the dinghy because Maryanne had seen a café there on one of her maps and we were getting a little peckish.

The rumor turned out to be legit. We had lunch at the Historic Gumstore Bar and Grill. The place seems to have been there since the days the area was a logging camp a gazillion years ago. Their Fish & Chips were well worth the walk.

After we returned to the boat, I returned to Totara North for fuel. I got it without any problem. It was 20¢ per liter more than across the harbor at Whangaroa, so I tried to go there for my second load. Their pump’s internet connection still hadn’t been reset, so I had gone all of that way for nothing. Well, at least our new, improved Torqeedo battery got some good use. Back to Totara North it is, then.

For our next stop, we headed just up the harbor to a prettier, more peaceful spot at Waihi Bay, nearer the entrance. 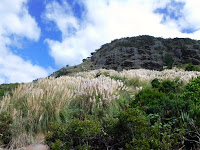 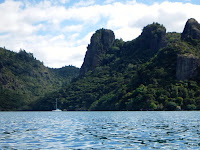 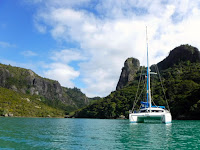 There are a couple of fishing cottages there, but no trails, so we focused on kayaking all over the place, poking into all of the inlets and crevices along the nearby shores. Our real highlight came when we went out the next morning. We left the harbor entirely and paddled northward up the coast to Jellicoe Caves. There, we found a few sea arches, including a big one about 10m wide, which we could easily paddle through. We also found a few tunnels and caves that were just wide enough for us to get into by pushing our way along the walls, taking care to keep the inflatable kayak away from the rocks. At one point, we even came to a wide spot at a Y intersection, where we were able to rise and fall on the slowly heaving swell while seeing daylight coming in from all three directions at once. 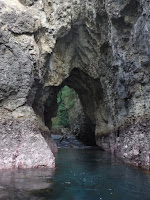 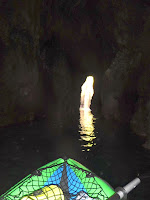 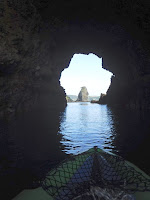 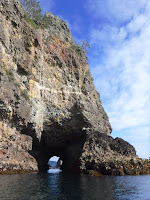 We took a rather long kayak trip out of the harbour - to Jellico Cave(s) - we were not disappointed!

Just for good measure, we crossed over to the cliffs on the other side of the harbor entrance and took our time following them in. We definitely like Whangaroa Bay very much and will make a point of spending even more time here on our next visit.