[Kyle]We left Stinking Wind (Onepua) and immediately ran into a bunch of stinking wind. It was a good day to have the protection of the surrounding mountains.

We found ourselves an overnight spot in the lee of one of them, where we could just see the city of Picton in the distance. There was a DOC sign for a trail, so we used that as an excuse to inflate the kayak and go have a look. 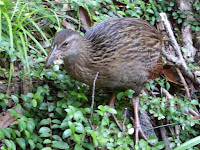 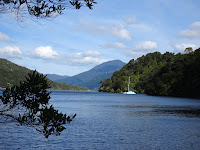 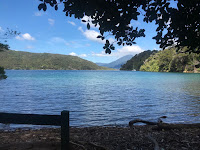 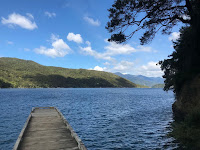 Kumutoto Bay - the bird is a Weka

What we found was a well-tended trail that meandered along the mountain slope to a campsite at the next cove. That was it. The DOC does this all over the place. The trail had clearly just been maintained – trimmed leaves and branches on the trail were still green, so they had to land people and equipment to do the job. It seems the entire purpose of the pleasant trail was just to give the people camping there something to do other than fish and wonder how much longer before they can open their next can of beans.

From our spot opposite Picton, we went further up Queen Charlotte Sound to the head of Lochmara Bay where we hoped to find some protection from the coming storm. 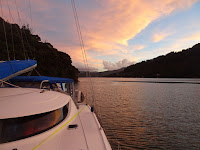 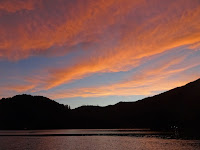 Lochmara - the calm before the storm

What we found were two coves at the end that were completely filed with unoccupied mooring balls. Oooh, this bugs me! {Nothing against mooring balls, but when the chart and guidebooks suggest we can find an 'anchorage' that is what we expect to find!}. There was no hope in the western arm, but the one next door had just enough room for us to fit in between them all.

Or so we thought. The high surrounding hills only offered protection from the wind half of the time. As the wind streams overhead, the valley’s calm bubble grows and shrinks as the turbulence at the interface adds or subtracts air, Every now and then, the whole thing gets unstable and collapses completely before refilling again. When it does this, wind comes rushing down into the valley. When this wind comes, it is from random directions and hits the water tumbling and spinning.

At the water’s surface, we would be bobbing next to our anchor, not pulling at all, in about two knots of wind, when we would get hit by 40 knot gusts. We could see the trees shaking as the wind came barreling down the hillside at us. Sometimes it would miss us entirely, sometimes we would get hit with a back eddy. We often would have winds at deck level going the opposite direction from those at the masthead, or none versus lots. It was crazy! At one point we got hit by a whirlwind that very slowly crept up from behind and then engulfed us in flying spray before disintegrating into chaos when it hit our rig. Wind at the helm was from the right, wind at the bows were from the left. I was glad we didn’t have any sail up for that one!

All of this meant our motion was crazy. We would pull really hard on the anchor and then the wind would stop and another one from behind would come in and start pushing us forward. We would get up to two or three knots before reaching the other side of the anchor, then we would swing around and get snatched to a lurching stop. Then a wind would come in from the side…

During our little tour, we came just a little close to two of the moorings. We weren’t comfortable in the event some big fishing boat comes in and picks one of them up while we were sleeping, or trying to anyway. We pulled up our anchor and decided to tie to the one of the free balls in the harbor. We picked the one that looked like it had the magic combination of being least likely to be in current use and most recently maintained. We picked one on the edge of the field, tied up to it and pulled HARD. It didn’t budge even a little, so we settled down for the night and hoped we wouldn’t get booted off.

We didn’t. The night was miserable. We lurched and yanked every which way all night long screaming gusts and pouring rain. I left the instruments on overnight. We recorded a maximum gust of 48 knots (55mph, 88kph). We saw LOTS of forties during that.

We stayed another night after the storm ended, all of which was in blissful flat calm. That allowed us to get the sleep we had missed the night before.

We tried going further down the sound after that, but had a really hard time finding suitable anchorages. Almost every place we found that said it was five or ten meters on the chart turned out to be twenty-five and way too close to shore for that depth. All of the others were full of empty mooring balls Grrr… 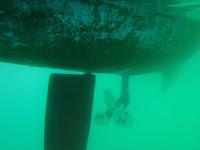 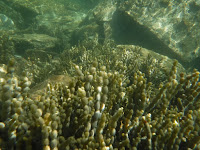 Time to clean the bottom - and attempt to enjoy a snorkel in the cold waters of Burney's Beach.

We eventually ended up way out at a place called Burney’s Beach on Arapawa Island. Apart from lovely sunset views, there wasn’t much there to see in terms of kayaking or shore diversions, so Maryanne decided she was going to bundle up in neoprene and go for a swim. Then SHE scrubbed the slime off of the bottom, which made me really happy, because that’s usually my job and I really didn’t want to do it. It took her hours and lots of warm drinks go lose the chill after that. That seemed like enough effort for one day.

The next day, she did that thing where she impresses me by sewing.

The sun cover on our jib had a few spots that needed attention, so we unrolled it, pulled it down and wrestled it into the cockpit so she could reach it with the machine. Once she started (and got a better look at the sail) she decided to re-stitch the entire thing. Imagine repairing a pool cover in a walk-in closet. She and her trusty machine were surrounded by clouds of white sail, all of which had to be manhandled in its entirety to get the needle exactly where she wanted it. The job took most of the day and we were both happy to decide that it met our “One Thing” rule when we were done.

We moved a little bit further on to Ship Cove, which is about as close as we dared to the entrance to Queen Charlotte Sound. Another storm like the last was on its way and Ship Cove is pretty much the last spot offering any protection.

Firstly, though, we had a couple of days when it was not blowing like hell. In fact, there was hardly any wind at all, the sky was blue and the temperature was warm. We got the kayak out and headed ashore for a good old fashioned uphill climb to a viewpoint, where we determined that New Zealand is scenic.

Another catamaran came in called Enola. It was the first we had seen since leaving Abel-Tasman for Fiordland. Aboard were a couple from the Bay of Islands who had just retired (early) and were spending a couple of months in Marlborough. When they found out our plans, they said we would be beating them home and offered us their mooring to use while we are there. We then whiled away much of the morning going back and forth with cruising tips. They had just bought their boat and are planning on leaving in a year or so. It took us back to that time for us.

With what was left of the day, we had another tour in the kayak and took another walk through the forest. Ship cove is the terminus of the 71km Queen Charlotte Walk. It is also where Captain Cook landed four times and so has a nice monument and some pleasant park grounds, including a stretch of mown grass where hikers can lie in the sun (or rain) after their walk. 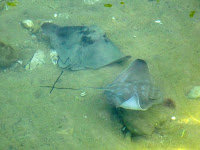 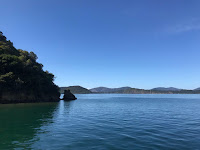 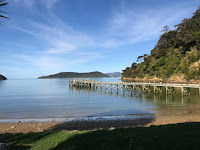 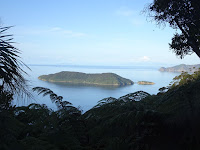 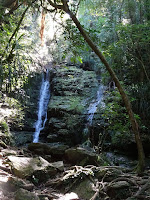 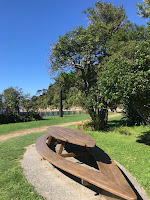 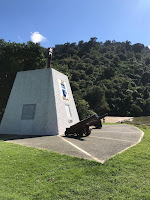 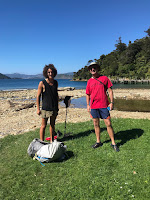 Just before we started on our much shorter walk, we spotted a guy lying in the grass and went over to say hi. His name was Kenner. When we asked him where he'd come from, he said “Bluff”.

Holey, Moley! It turns out the Queen Charlotte Track meets up with a larger one that traverses the whole length of the island (Te Araroa - The Long Pathway - actually goes the whole length of both North and South Island). He had just a few moments ago finished the 1,300km hike of the length of South Island on his fifty-ninth day. He left Bluff the same day we left for the sail to Milford Sound. He was waiting for the mail boat to pick him up and drinking the two cans of beer he had saved in the bottom of his pack for the occasion. Good on that guy! Our little mile to the waterfall seemed so puny by comparison.

After that, we had to pack it up to get ready to move on.

The storm arrived and it was pretty much a repeat of the last one, except with a slightly more consistent wind direction. The mono-hull had dragged and re-anchored overnight. Through the pouring rain of the morning, I could just barely make out Enola heading for a safer harbor deeper in. We stuck it out and it started calming down a few hours later. Behind that, the wind will be coming from the south for once, so it’s time for us to go with it.