[Kyle]From our anchorage at Maskelyne Island, we did a short, winding trip to Gaspard Bay, on the main island of Malakula. There were rumored to be dugongs there as well. We went as far as we could up the bay and anchored as the only boat in the middle of a big, shallow cove surrounded by mangroves. 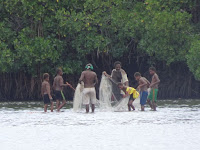 This turned out to be a bit of a mistake. We had great protection from wind and seas, but the silt draining from the swamp beyond the mangroves made the water very murky. When I swam on the anchor to make sure the bottom was really mud, I couldn’t see my hands in front of my face. I had to find the anchor by feel. Not recommended. I kept worrying I was going to find something spiky or poisonous down there. Because the visibility was so bad, there was no coral or sea grass growing, so there was little sea life to see other than jumping fish and the heads of occasional sea turtles.

We inflated the kayak to have an explore around the bay at large, We discovered that further out, the silt settles. There were quite extensive patches of sea grass and plenty of coral reefs. We skirted the edge of the mangroves. In a few places, there were tunnels where we could cut through to the shore beyond. We were expecting to be repelled by all manner of biting insects, but were astonished to find none. Usually, swamp means bugs.

At the opening in the far northwestern corner of the bay, we ended up finding a pretty extensive river than seemed to run on for ages. Once through the mangrove barrier, we entered a primeval land of swampy wonders. In the darkness under the canopy, there were giant, old-growth Cypress trees with enormous buttress roots. Dripping from them were bromeliads of many types and vines stretching to the water. They don’t exist here, but it wouldn’t have felt out of place to see a big crocodile or a giant python draped over a branch. It was the perfect setting for a spooky fairy tale, except that it was too fascinating. We kept thinking we were nearing the end, but then it invariably turned out to just be a bend in the river, with more beyond. What a find!

At a couple of spots, we saw signs of human habitation – fire pits or words carved in trees. We called out, but no one answered. It would have been interesting to see who lives in here and what they do for sustenance.

In the morning, Maryanne went in the kayak to the outer bay by herself and spotted a few dugongs coming up for air. She came to retrieve me, but by the time we got back, they were gone. She went in the water for a meandering swim home while I crisscrossed the bay in the kayak, hoping for a re-sighting.

We didn’t get one, but later that afternoon, a boat coming into the outer anchorage reported a big pod of dolphins in the pass. Maryanne and I paddled way out there and found nothing. We were having a rest before starting the paddle home when a pod of maybe forty dolphins came by.

They were clearly fishing, using the reef as a barrier to herd the fish. A few of them were slapping their flukes to stun their prey and one or two would even do full breaches and back-flips for the same purpose.

They did this over and over, passing by and around us on each pass. We got to spend maybe half an hour with them. That was cool!

Once we got home, we saw, but did not meet, some locals. They waded out barefoot onto the mudflats from under the mangroves. Two men spread out a big fishing net and then a bunch of boys would run towards them, kicking their knees high and making big splashes in the water. The guys on each end of the net would encircle the boys and then they would all help each other pick their newly caught fish from their nets. They did this half a dozen times before fading back into the mangroves, leaving the bay as quiet as if they had never been there in the first place. 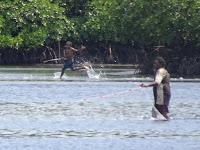 Geniet Lewe and Duplicat arrived and anchored midway between us and the outer bay boats. We could just see them sticking out behind the headland. Maryanne paddled the kayak over to say hi while I was doing morning weather downloads and dishes.

A panga arrived at the outer boats. They were offering dugong tours for 2,500 vatu. They got two takers from the outer anchorage and their little boat was laden to the gunwales. The boat was tiny and full, so the fee was for following them to the site in your own dinghy. Not for us! Rick, from Duplicat knew where to go and he has a big, fast dinghy, so after paying a minimum fee he picked up some of the Geniet Lewe crowd and off they went.

Ten minutes later, it started to rain. It rained so hard, it blotted out everything except the thirty meters of splattering water around us. We couldn’t see the other boats. We couldn’t even see land.

When it cleared up enough for us to see Duplicat, which was the nearest boat to us, we noted that the dinghy was back and hanging from the davits. During a big lull, he tried again, but could be seen racing back just in front of another gray wall of showers. Poor Rick. We’re going to start calling him the Rainmaker.

After giving up for good, he and Amanda invited us over for drinks. You know how that went. We started the row over in a lull, but then it started to drizzle. That turned quickly into rain that kept falling harder and harder. I pulled on the oars like a madman and was just able to get us there before our thin coating of moisture started threatening to soak us through. Amanda had towels waiting for us once we arrived.

It rained hard for three hours, which allowed us each the opportunity to use the long versions of whichever stories we were telling. It was a really nice evening. It cleared quickly once the rain stopped. After we got home, we were able to sleep with the hatch above our heads open all night. I still can’t believe there were no bugs around.