[Kyle]We left Lamen Bay before the big feast and sailed across to Maskelyne Island, one of the smaller islands off of Malakula. We were having a slow, leisurely downwind sail, feeling quite relaxed until Geniet Lewe left behind us and put up their spinnaker. That made me realize we were under canvassed as well, so we rolled up the jib and unfurled ours. By the time we both pulled them down, they were only five boat lengths behind us, but they were still behind us. We started engines after we got everything sorted. By then, they were way ahead of us. They were already anchored by the time we pulled into the bay. 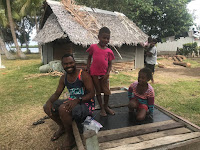 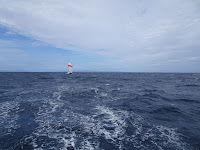 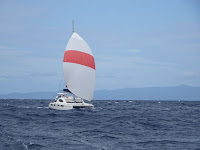 Another boat = a race? They are certainly catching up! 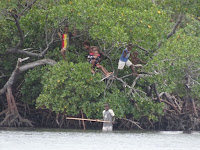 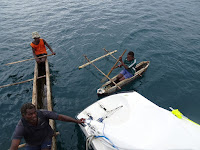 When we arrived, the lagoon was busy with kids playing among the mangroves, and soon we had visitors at Begonia 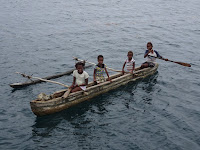 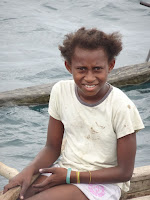 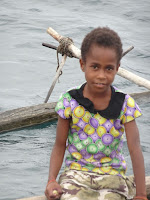 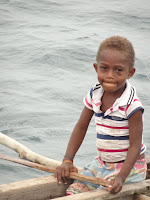 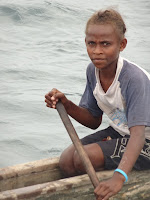 Several dugouts rowed out to each of us to say "Hi" in turn. The last one to visit us was a guy named Tom from the nearby village of Peskarus. He said he did various tours. When we asked him if there were any dugong in the area, he offered to go right then to see some in our dinghy. We had already had a long day and I still needed to do an oil change on one engine, so declined the now option.

After several attempts to persuade us to drop everything and go now, I finally got him to understand we wanted to wait and try tomorrow. When we explained that we had a slow, rowing dinghy, he told us he could get a panga with an outboard to take us to see the dugong and when asked for the tour price told us 2,000 Vatu.

”Each,” Maryanne asked, “or together?”

In the morning, a local named Phillip rowed out and asked us if we wanted to do a dugong tour. We told him we had already promised Tom, sorry. He said they had some complaints about him and that he wasn’t from their village. We didn’t want to get in the middle of island politics and said we would go with Tom. We wanted to keep our word. He understood that and wished us a good day. {Maryanne: Oops, what have we done?}

We coordinated with Geniet Lewe to go ashore at the same time to make our introductions to the chief and meet the villagers. I’m not sure if we ever saw the Chief. Somebody introduced another guy as the former Chief. Regardless, everyone agreed we were free to roam and almost everyone we met spontaneously offered to show us around. We saw everything at least twice, met a bunch of really nice people and came away with a huge haul of fresh veggies in exchange for a few school supplies. Maryanne even convinced someone to do a sand drawing demonstration when we spotted a pattern in a concrete slab at the school. 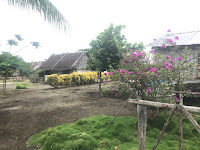 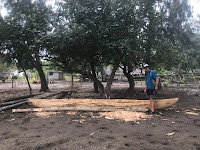 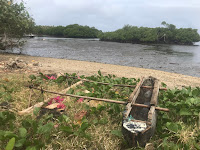 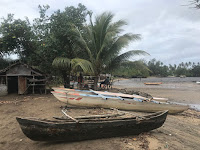 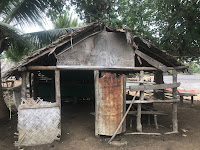 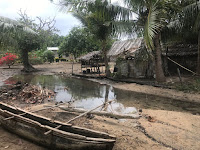 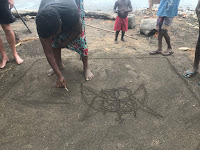 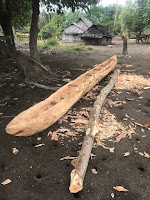 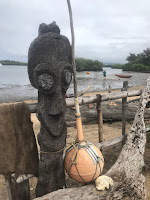 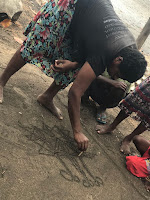 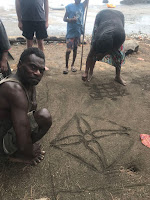 Ashore in the village of Lokienuen

We were told by the locals that sand drawing is not traditional on Maskelyne, but one of the women in the village was originally from Ambrym, where it is. It seemed to be something that hadn't occurred to them to share, but once the demonstration began, it drew a crowd of locals just as excited to be watching as we were. Maybe one of those ‘we only do this when visitors come around’ things, like taking friends to see the Statue of Liberty when they come in town, even though you can see it from your apartment year-round. Soon, there were lots of people crowded around, watching how she did it and trying for themselves. Maryanne joined in the fun when she got down and drew the gecko that she had learned at the National Museum.

Next came our dugong tour with Tom. At the agreed hour, he didn’t show. We waited and waited and then waited some more. Just about when we were going to give up on him and go over to Geniet Lewe for a prearranged rendezvous of sundowners, we saw a panga speeding our way.

It sped right past us and over to a newly arrived boat whose anchor had only been down for ten minutes. He seemed to be doing the same high-pressure sales job on them as he tried on us the day before. Soon, they were all piling in and the panga headed our way.

We took seats in the back by the noisy engine. We were feeling a little slighted, but the fresh air and rush of water quickly dispelled that. It turned out the guy couldn’t have shown up any earlier. The tide was rising and had just barely risen high enough to accommodate the panga. Several times, the skipper even had to stop to lift the engine so we wouldn’t ground on particularly shallow spots.

After what seemed like a very long way, the panga stopped and we were told we were in the spot. We were in fast moving open water in the current between islands. We were told to go in and let the current take us. Since the panga couldn’t have the prop going near the dugongs, we first had to swim to them. The instructions weren’t very clear about which way we should be going. We all swam in circles for a bit and then finally figured out from Tom’s gestures from the boat that we were supposed to be going THAT way.

Almost as soon as we did, three dugongs came streaming by us. Then another came and what I think may have been the first three went past us the other way. Then we saw five at once. They are just adorable. They seem a little smaller and more streamlined than Manatees and their big brown cow eyes and droopy faces make you want to just pet them, but you can’t because they are surprisingly fast and agile.

Maryanne and I got swept away from the crowd. We were quickly picked up and taken back to the main feeding area. There, we spent another half hour watching them meander to and fro. Our very last dugong even stopped and came back to get a second look at us.

Finally! Kyle gets to see Dugong too

The sun was about to set and we needed to get back to Maskelyne. Everybody was all smiles. Tom was forgiven. It really was a good trip.

When we got back to Begonia, Tom explained that the 2,000 vatu was for each of us and just for the fuel. The tour was another 2500 each. Uh, what‽ I don’t think so. You are un-forgiven.

He tried to pretend he hadn’t pulled a Bait and Switch, but we weren’t having it. We had only brought 2,000 with us because we were certain that was what he had said. We asked him twice at the time to clarify. In the end, we agreed to give him 3,000 (all the cash we could spare). Phillip came by later as we were leaving for Geniet Lewe and asked us about our tour. When he asked us how much we paid, I was reluctant to tell him, but he eventually got it out of me. He seemed to think we had ended up paying a fair price. We promised to send anyone we met to the village first before committing to anything with Tom.

{Maryanne: I hate when such things happen, there are no ATMs to hand, so I try really hard to be sure the price is fully understood before we even commit to a tour (or meal, etc), if only to be certain we have sufficient cash funds. The local entrepreneurs are working to pay for school fees for their kids, we don't want to rip-off anyone. The previous day we'd have multiple back-and-forths verifying the price, so it was an embarrassment to suddenly be asked for much more. If the mistake was on our part, I'd feel terrible, but Tom had every chance to be clear about the price and the only price he repeatedly quoted was $2,000 (about $20US). When the price changed after the event we simply didn't have enough cash, and felt betrayed, embarrassed and uncomfortable; we'd had a wonderful time and certainly didn't want to short-change Tom (or anyone), but we seriously believed a price had been agreed upon...}