[Kyle]We were the first to leave Ile des Pins in the pre-dawn light. Even though we were headed dead downwind, we were trying to go a long way and needed to make the most of the light. We had a bit of an uncomfortable reach as we sailed across the wind back through the pass and into deep water. Then we turned downwind, rolled up the jib and popped out the spinnaker in twelve knots of wind. Now we’re moving!

Another, much bigger boat exited after us and quickly caught up. Then it seemed they actually stopped engines as they inexplicably slowed down to our speed. Good on them! They slinky-ed back and forth behind us for several hours, when they finally overtook us at the entrance to Prony Bay. They pulled off at Ile Casy. We continued to Careenage Bay at the head of the bay, where we were the only boat in the bay along with two empty private mooring balls.

This arm of Prony has lots of good hikes as well as a hot springs. We were up early for a dusty hike to the hot springs the next cove over. There, we found a slightly dilapidated pool, complete with wooden decks and a picnic table to use when not soaking. The pool was not hot – more like lukewarm, but it felt good to wash the dust off. 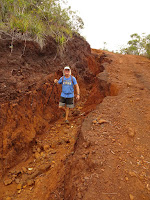 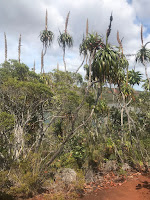 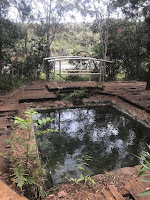 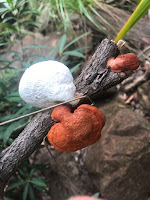 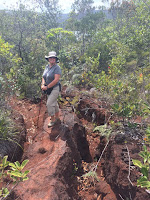 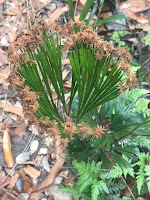 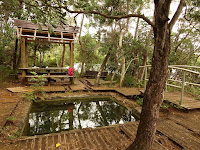 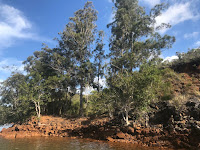 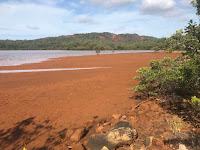 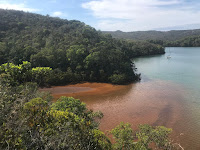 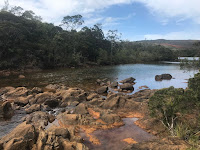 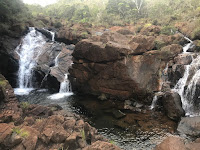 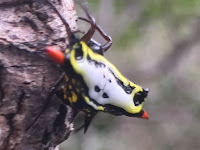 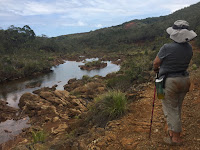 We continued on way up into the surrounding forest to a high viewpoint, ate our lunch of granola bars and then returned to the pool for another rinse before trudging home. We had almost made it to the dinghy when we realized we were missing a big waterfall at the river feeding into our branch, to we headed for that. The water there was not even close to as warm as the pool, but it was fresh and clean and felt good after our extra-credit hike. Time to head back to Begonia for sunset.

When we got there, we found six other boats packed into the little anchorage. As we arrived home, the guy in the boat adjacent called over and invited us for drinks. Okay. They were with the ICNZ Rally. We had met most of them before, most recently in Ile des Pins. We asked them about their sail.

The response was, “Well, we didn’t so much sail as air the sails out. We only had twelve knots of wind, so we had to motor the whole way.” I looked around the table for a dissenting anecdote, but there was none. They had ALL motored…in twelve knots of tailwind!

Oh, honestly! To me, this is like having a hybrid electric car that can go all day at forty miles per hour for nothing, but to go sixty, you have to run a gasoline engine that gets only six miles per gallon. Why not leave early and take the free ride? Sailing doesn’t burn fuel, but it’s not cheap. The mast, rigging, sails and all that probably add up to a third of the cost of the boat. Why buy all that if you never use it? The whole point of a sailboat, as far as I’m concerned, is to harness the surrounding wind for propulsion. Too many people have become used to the idea that if they can motor at seven knots, they should be able to go everywhere all of the time at seven knots. Then the sails become relegated to only the most perfect conditions. The rest of the time, we’re just a bunch of SUVs blasting around.

Anyway, they are all really nice people and we did have a good time. I just wish we sailors would rethink our habits a little.