Tweed Head - Crossing the border between QLD and NSW

[Kyle]Next up on our trip along the East Australian coast was a stop in the Tweed River. The Tweed is shallow and fast running. The shallow part was good, because it allowed us to put out only a small amount of chain and thus we needed only a small space amongst the local rental houseboats. 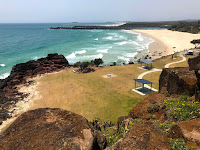 Fast was more problematic. Our bottom needed cleaning. I managed it, but three quarters of my effort was spent holding myself against the current, which made a hard job four times as hard. 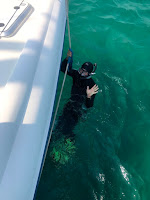 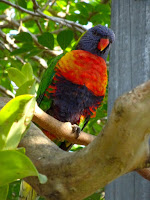 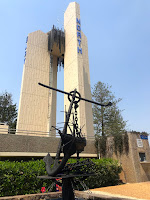 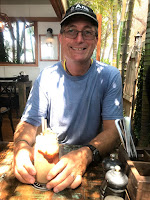 Tweed Head borders the town of Coolangatta. Coolangatta is in Queensland, Tweed Head is in New South Wales. The border runs right through many parks and businesses and terminates on the coast at Danger Point. One complication is that NSW observes Daylight Savings Time and Queensland does not. We ate at a cafe 30m from the border on the Queensland side. I overheard our waitress explain to another customer that they were still serving breakfast “because it’s morning here”. We’ve noticed that most of the signs specifying a time for something, like a town hall meeting or a church service, explicitly include the time zone on the notice.

We continued on up the Queensland coast until we were pretty sure we would be too tired to make it back. Every time we would get to our pre-agreed turn around spot, we would see something else in the distance and decide to keep going, but only to there. The highlight was the singing sands on Coolangatta Beach. Here, the sand is very clean and of just the right microscopic shape so that it squeaks when you walk on it, like freshly fallen snow. 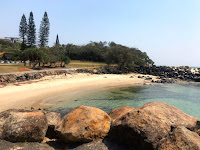 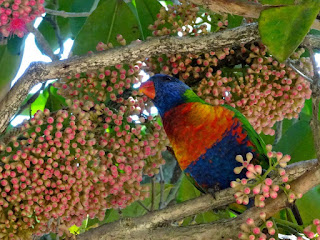 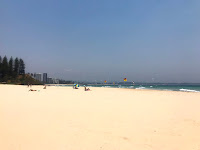 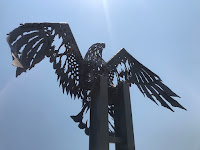 After walking most of the way back to the boat, we decided it was about time for a bit of tea and cake, so we started looking for a cafe. They suddenly became scarce on the street, so we ended up at the Tweed Heads (lawn) Bowling Club, which had a sign outside indicating there was one within.

This was our first experience with an Australian club. Australians love their clubs and almost every town bigger than medium size sports at least one of them. We were given free memberships for being out-of-towners (otherwise, it’s $25/year). After being granted access, we went in to find a decent-sized casino, a dance floor, a restaurant and our searched-for cafe. We ordered and took a seat by the big second floor window overlooking the greens.

The lawn bowling club here is by far the biggest one we have seen anywhere (with multiple indoor and outdoor greens). Well, it turns out Tweed Heads has a lot of world class professional lawn bowlers and the THBC is a major stop on the international circuit. I don’t know much about it other than that the goal is to get one of your big colored balls as close to the little white ball as possible, but it is strangely mesmerizing once you start watching, especially with a cup of tea in hand. I was especially impressed by an amputee below us in a wheelchair who had an amazing ability to curve his ball either direction around his opponent’s and stop a couple of centimeters away from the target.

It was with a warm feeling that we walked home through one of Tweed’s nicer neighborhoods, pleased with humanity’s ability to spend a nice day over a friendly game with friends. That ended when we came across a bunch of kids swimming in the river. At first, it also seemed like good clean fun. Then one of the elderly homeowners came out and asked a couple of the kids to please swim on the other side of the canal (which was public) so as not to trample the flowers in their garden. He was in no way rude about it, but in response, the kids he addressed unleashed a torrent of foul and abusive language at both him and his wife. The kids retreated grudgingly, but then made a point of being as loud and crass as possible afterwards. It reminded me of conversations we have had with many teachers saying that kids are getting harder and harder to manage. Neither of us could ever imagine speaking to an elder that way from when we were kids all of the way up until now, even if in our minds, we did think they were being unfair. Being kids, though, they got bored of the affair soon enough and left, leaving us peacefully bobbing on the river.