[Kyle]We left Wineglass Bay, Tasmania as soon as it was light enough outside to do so. While we still had the protection of the bay, we unfurled both sails, each with two reefs. It took us about five minutes to get far enough out to sea to be out of the lee of the trees behind the beach. Then the wind came in hard. Two reefs wasn’t enough, so there was a scramble to shorten sail even further to keep the stress on the rig down. 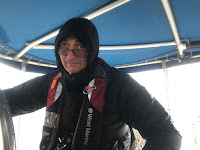 We made a turn to diverge from the coast, which put us with the wind right on the beam. As we sailed behind a headland, the wind would drop to five knots and we would slow to a crawl. Most of our speed then was from the following current. Then we would pass abeam a valley and the wind would shoot up to thirty knots within about fifteen seconds. We would hold on for the ride until the next lull and then repeat. As we slowly increased our distance from the land, the peaks and lulls smoothed out and we ended up with just a whole lot of wind, but at least it was now from our port quarter. 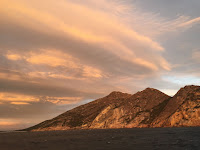 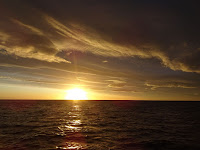 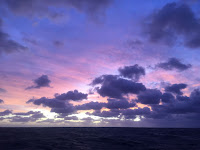 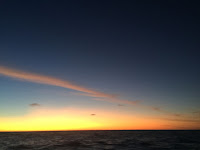 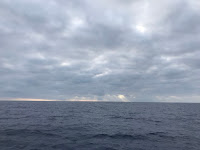 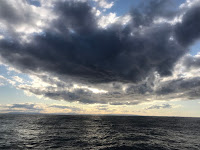 When we were about forty miles offshore, we made a turn to parallel the coast in order to get the most out of a big back eddy peeling off of the East Australian Current. We should have made it fifty, because we soon sailed into a big bubble of calm in the lee of the the northeast Tasmanian mountains. That left us bobbing around in big, sloppy waves. We held out as long as we could, but eventually decided we were going to have to start an engine to escape.

Maryanne had just shut it down when she woke me up for my first night watch. We were now downwind of the gap between Tasmania’s northeast corner and Clarke Island. The wind accelerated through there and reached us still going thirty to forty knots. Since it was mainly from behind, our wind gauge mostly hovered just above thirty. That is still a lot of wind, though. It had built the seas up to three and a half meters or so. With the wind came cold rain which mixed with cold spray and the occasional dousing from the errant cold wave. What the hell were we doing out here?

Well, I knew, because it was my fault. The wind down in the forties is pretty much always howling. I had to select our weather window from a series of pretty poor options. I had picked now because we at least had a few days of wind howling in the direction we wanted to go. We knew before we left that it was going to be a rough, awful sail and indeed it was shaping up to be.

We had the same conditions for pretty much the whole week it took for us to get to Lord Howe. The whole time, I kept thinking, “This place had better be NICE! If it’s not, that Phil is in BIG trouble!” Phil was the Phil off of Muse, who had shown us his lovely pictures of their visit and insisted we just HAD to go. Maryanne had been making not-so-subtle hints about Lord Howe for a while. I was still on the fence. It did sound nice, but it is a third of the way to New Zealand, which makes it more than a bit out of the way on the already long trip up Australia’s sizable East Coast. Phil’s recommendation had pushed me over the line on the decision to go. This was all Phil’s fault.

To be fair, the weather would have also been bad on the way to the mainland. Actually, within the current system, it would be worse there, but that’s not the point.

The good thing about our predicament was or big back-eddy. It had formerly been the East Australia Current, delivering warm water from the Tropics along the coast. When we entered it properly, the water temperature increased five degrees Celsius in six hours. It was still cool, but the bite of getting hit in the face with ice water was much reduced.

The water going the same direction as the wind made for slightly smaller waves and we got a big boost of speed. We had slowed way down through the the water to about six knots to take the strain off of the boat, but we were still having an easy time making nine or ten over the bottom. 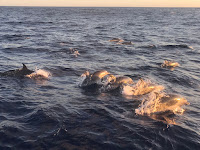 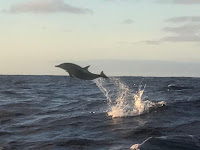 Dolphin visitors way out to sea!

Even though, all of the motion took its toll. On Day Five, I found a bolt sitting on the deck way forward on one bow. I tackled it before it got swept away. This is why all offshore sailors should go up the mast regularly to inspect and, just as important, to memorize every piece of hardware up there. I recognized it as a set screw from one of our mainsail slider cars. From the deck, I couldn’t tell which one until I got the binoculars out. It unfortunately was one way up toward the top. 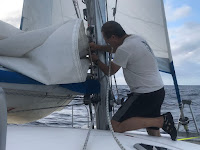 Our mainsail cars slide up and down the mast track on ball bearings. They are attached to the sail through a big pin that runs vertically through both the car and an eye bolt screwed into each sail batten. The bolt I found on deck holds the pin in place so it doesn’t fall out. This is a minor version of what is known as a Jesus Nut in aviation. A Jesus Nut does not take the strain, but secures the part that does. They, like our little bolt, are often surprisingly flimsy little things. Seeing one and realizing it’s ultimate responsibility as the thing keeping the tail or the main rotor from falling off often causes one to exclaim “Jesus!”. Also, if it breaks, you’re about to meet Jesus, hence the name.

The true Jesus Nuts on Begonia are probably the secondary Jesus Split Pins securing the primary Jesus Nut at the end of each of the stays that support the mast. That was a modification we made to buy us time to fix the problem as the failure works its way through the extra level of redundancy. The pin falling out of the sail car would have just made the sail a little floppy until we could shuffle the car order to get the bad one on the bottom. Then we would just have to sail with a reef in until we could repair it, which might be a while in these rough seas.

As it was, the only thing holding the pin in was the tension on the sail. Soon, it would work its way out. The problem was that lowering the sail would definitely remove the strain and cause the pin to fall. Maryanne and I worked together to try to lower the main while keeping a load on it. We managed to get the problem car down to about five meters above us when the pin finally fell out. It bounced on deck and I was just able to chase it down and tackle it before it went over the side or I reached the limit of my safety tether. WHEW! Ten minutes later, it was fixed and the sail was back up and pulling.

Before we got to Lord Howe Island, we decided to divert slightly to Ball’s Pyramid, the “other” big island in the Lord Howe chain. We were close enough by my last night watch that I was able to spend almost all of it hove to. I tied a shock cord to the wheel to keep the rudders producing a force in opposition to the triple-reefed jib, which kept us well under one knot.

I first spotted Ball’s Pyramid at about 2am. It was a new moon, so it revealed itself as a blackening out of the background stars. It was a bit creepy, because the silhouette looks like a lot of rocks one sees at sea in the 50-100 meter elevation range. Ball’s Pyramid is 551 meters high. That kept me constantly thinking it was a lot closer than it actually was, so I spent most of the night double and triple-checking our position and the charts to make sure we really weren’t about to accidentally drift into it.

The sun rose to reveal a giant wall of rock towering above us with waves crashing at its base. The waves seemed unusually quiet though, which of course was because it was still a third of a mile away. This thing is enormous, but with few visual cues to reveal scale. As the light improved, all we had were that the little white specks at the top were whole sea birds. In the photos, it looks like a nearby run-of-the-mill rock, but we had to get more than a mile away to get the whole thing in the frame. 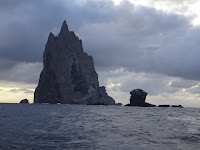 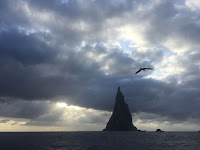 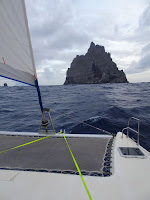 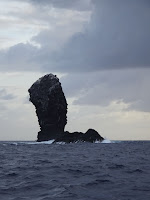 Ball's Pyramid (and adjacent wheatsheaf rocks) was a worthwhile detour

I unrolled the jib to get us moving and Maryanne took photos as we headed toward Lord Howe. A little further on, we had sailed to where we were edge-on to Ball’s Pyramid. The wall is certainly a very big and impressive wall, but side-on, you can see that there is no backing. The other side is also a sheer cliff! From the side, it looks like a giant dagger thrust up out of the sea. The enormous prominence is the remaining hard center of a once great volcano. The rock is strong enough to support its weight without being crushed by gravity into a mound of rubble. Amazingly, we later learned that a handful of people have actually done the multi-day technical climb to the summit of that thing. It’s supposed to be up there with scaling El Capitan for difficulty. The first problem is that they have to wait for a calm enough day to get close in a boat. There’s no place to land, so the first step is straight up. 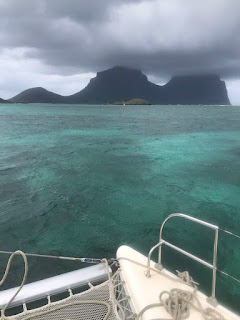 A few hours later, we made it to Lord Howe Island. We rounded the south coast, where the even bigger cliffs of Mt Gower plunged into the sea. We called the harbor office, who promptly handed us over to the local constable, Simon. He directed us through the pass and to our mooring ball over the radio from his truck. He then gave us a long list of documents to bring ashore with us for check-in. Most people sneak in an emergency stop on the way from Aussie to NZ, so he was surprised when we said we left Tasmania and were going to Queensland. In that case, no formalities necessary. “See you whenever. Enjoy your stay!”

This place is beautiful! Phil is likely to be off of the hook for a passage that was basically a 172-hour earthquake.