Passage to the Mainland

[Kyle]Oh, it was tough to leave Lord Howe. Unfortunately, they have a two week limit. Even more unfortunately, Cyclone Gretel was forming over the Queensland coast and half of the forecasts said there was a good chance it would try to head for Lord Howe. Our initial plan of sailing north to Middleton Reef to spend a couple of days there would also put us in the cross-hairs. We had to get out before it had a chance to get too close. 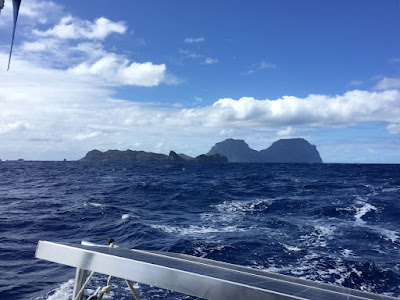 It was such a perfect, sunny, clear blue day. It would have been easier to think, “good riddance” if it had been cold and rainy.

When we cleared the pass, we hoisted the spinnaker and off we went. Since we were now moving almost the same speed as the waves, I dare say it was smoother for us at sea than it had been in the harbor. Our only motion was a nice, gentle pitching on a twenty second cycle - perfect for rocking the off-watch to sleep. By the time the sun set, we were fifty miles away and could still clearly see the twin humps of the tops of Mt Lidgbird and Mt Gower.

As morning arrived, so did more wind. Cyclone Gretel was tracking north of us. We were still a safe 500 miles from the center, but were feeling the effect. The waves also started building to more than we would ordinarily expect from our current twenty-knot winds.

By Day 3, we were back to being in proper storm conditions, like we had on our sail to Lord Howe. We weren’t bothering with the mainsail at all, just flying a double-reefed (25% area) jib. The wave crests were now high enough that we couldn’t see over them when we were in a trough, When standing on deck, my eye height is 3.5m above the water, so I estimated most waves to be 4-4.5m. Generally, Begonia is fine in seas that size. The bummer thing is that waves that high have little problem reaching over the gunwales and dumping a bathtub’s worth of water on any poor sucker standing there trying to roll another reef in the jib. The good thing was that it was now warm enough that it seemed like a better deal to get occasionally soaked in lightweight, breathable clothing than to swelter inside foul weather gear.

On Day 4, we arrived at the Queensland coast. I had planned our arrival to be at the only slight lull in the forecast in the hopes that we would have mild enough conditions to cross the Wide Bay bar.

Wide Bay bar is tricky, though, because it requires a big dogleg to get in. The initial course requires passing between two shallow sandbars over a slightly less shallow valley between them. The wind and waves were such that we would almost certainly get “totally awesome surfer waves” on both sides. The big question was whether there we be a sufficiently large smooth patch in between for us to get in. We were battened down for a pretty scary transit.

Since the sand at Wide Bay bar is slowly shifting, it is necessary to get up to date coordinates from Marine Rescue Tin Can Bay to be sure of traversing the initial leg over the valley between sandbanks. Maryanne called them for these and was told not to even try it, the bar was too rough. In fact, they said that the day before, they had to rescue three people who were swept overboard from a monohull that tried it. Granted, conditions were worse then, but only slightly.

That left us with three options. Option one was to turn and run with the wind up the coast to go around the north side of Fraser Island. That was bad because it would take us into really strong winds that were going the opposite direction from the East Australian Current. That current would oppose us until we cleared the shoals at the north side of the island. After that, we would be facing forty knot headwinds. Yuck!

Option two would be a windward bash southward until we could find some protection, maybe at Mooloolaba, if we could make it across that bar, but most likely not until we got in the lee of Moreton island. That would be at least a day and a half of beating into big seas.

Our third option was to tuck in at Rainbow Beach on the south side of Wide Bay. There are lots of notes saying “Calm weather only” and, “Extremely uncomfortable.” about the place. This is when it is great to be in a catamaran. A lot of anchorages that are so rolly that they scatter monohulls to calmer anchorages are merely uncomfortable for a catamaran. Also, our low comfort bar was reset at Easter Island. Those anchorages were like being at sea on a bad day, so as long as our anchor is holding and we’re not in the zone where the surf is breaking, we think it’s great!

So - Rainbow Beach it is. It’s a pretty place, named after the multi-colored shades of sandstone making up the cliffs behind the beach. We deployed the whole lot of our ground tackle, which held onto the bottom like an eye bolt set in concrete and gave us enough shock absorption to keep the anchor from feeling the motion of the boat above. It was certainly rough here, as anchorages go, but it is much smoother than it had been underway AND we were relieved of the necessity to have someone at the helm twenty-four hours a day. 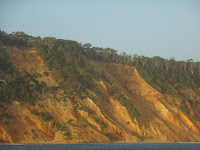 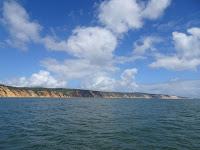 The forecast was for it to be almost a week before conditions calm down enough to cross the bar. There is way too much swell to land ashore, much less even launch the dinghy, so we have to content ourselves with enjoying the view and not having to sit watches.

When we were settled in, we connected to the internet for the first time since Tasmania and discovered that our little five hundred mile sail from Lord Howe had taken us to another world entirely. The minor, but worrying coronavirus outbreak that we had left behind was now beginning to cause worldwide chaos. Markets around the world had crashed and governments were instituting travel restrictions and advising people to avoid going into public places. Only a couple of days later, most of the world was in lockdown and any long distance travel seemed like it would be very difficult and also a really bad idea. Our whole reason for sailing to this part of Australia now had been to have Begonia hauled while we visit friends and family in the US and the UK. That plan is cancelled for the time being. We have already applied for a visa change to a type that won’t force us to leave and come back regularly.

Our isolation a mile from the beach has turned out to be a good thing under the circumstances. As of this writing, we have already been eight days since being close enough to anyone to exchange even a big full-arm wave. We have plenty of food and water and our solar panels and wind generator are putting out more electricity than we can use.

Without the need or ability to travel, our new plan is to do a quick haulout to apply some desperately needed bottom paint, restock, and spend a few weeks in isolation at remote reef or island anchorages with few or no other boats. Because of our lifestyle, we tend to only go shopping infrequently. So far, in the last year, apart from little trips to replenish fresh produce or to buy bread, we have been to the grocery store only four times. Our average visit is three cart loads for over a thousand dollars. That may not be possible anymore without at the very least getting the stink eye as hoarders. We’ll have to see what we can do.

I can certainly understand that most people have far more to worry about than we do. I feel silly now telling stories about cute fishes or romantic beach walks when the whole world (as are we) is worried about whether their lives are about to implode. Perhaps it’s time to lay off it for a while until everyone feels like they can stomach a bit of self-indulgent fluff. We’re still here, though and we’re hoping everyone reading this is able to get through this relatively unscathed. We wish you all the best.