[Kyle]Fortunately, we had a bit of mild weather leaving Cairns. We did the whole sail to the Low Isles in smooth seas using our backup spinnaker. We were moving fast enough that we arrived two hours earlier than we had originally anticipated. 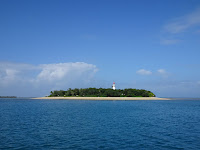 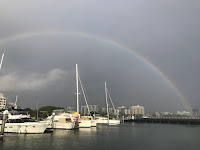 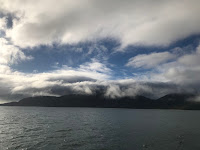 Leaving Cairns in the rain (surprise?!)

When we pulled in, we were messaged by Justine on the only other sailing boat in the anchorage, 'Shima', a catamaran much bigger than us. She and her husband Glen are from Gove in the remote Northern Territory and had been at Low Isles basically since the pandemic lockdowns started. They even spent some of their time subbing for island caretakers who could not come in for their stint. Justine said they had not seen any non-local boats for ages and wanted to say hi before they finally left for a haulout at Cairns the next morning. {Maryanne: Amazingly Justine has been a 'friend' via Women Who Sail Australia for some time giving me heaps of useful advice to all my ozzy questions!}.

They came over in their dinghy and spoke to us from it, so as not to break any potential quarantine for us. Mostly, the conversation was about the Covid-19 regs for continuing northbound. They, being used to cruising in heavily populated crocodile areas, also had plenty of advice about that. This included, “Don't sit on your sugar-scoop transom”, which I was presently doing. The croc-free offshore islands were fine, but definitely don't do it in continental estuaries. I couldn't help but notice that they had a big, aluminum dinghy, much less chewy than our Portland Pudgy. They recommended the snorkeling here and even gave us a helpful list of all of the fishes individual names, since they had been here long enough to meet every one of them.

Maryanne usually likes to snorkel at low tide. For the briefest moment, I saw her thinking a sentence that started with, “If low tide is at 6:30...?”, but she wisely stopped herself before actually uttering it. I was determined after our whole Cairns marathon that I would NOT be getting up any earlier than an hour after sunrise, preferably more.

Lucky for her, low tide turned out to be at 11:30. We went in and had a look around. No crocs. Also, no anything else. The water was way too murky to see much at all. Now I can't remember, was murky good or bad? We did have a few adorable long-finned spadefish show up (like at Bait Reef). 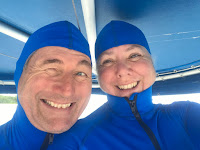 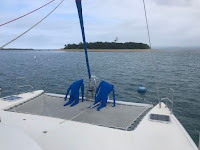 We finally have stinger suits (aka 'smurf outfits')
and got to put them to the test
They are supposed to stop any jelly fish stings
(since some are deadly here, it seemed like a good idea!)

We headed toward the island and eventually found a few healthier than normal patches of coral and some schools of fish. We swam a long way and finally only returned when the cold water drove us home. 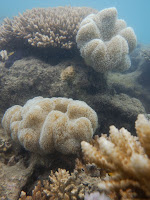 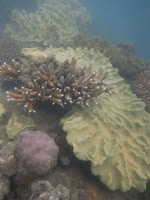 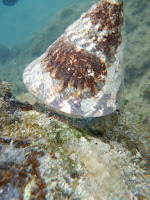 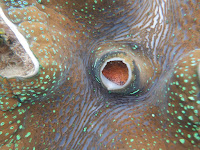 Snorkelling: we spotted a host of giant clams and a few other interesting spots

We are not supposed to be feeding the fish here, so we have been saving our food scraps in the cockpit to throw overboard when it's permitted when we are next underway. At some point, we were visited by a family of three Varied Honeyeaters, which seems to be the total population of them in the Low Isles. They found an apple core and spent ages turning it into sauce that they could lick up with their nectar-eating tongues. Anything the full-sized fledgling couldn't manage, the parents would grind up further and feed it to the youngster. 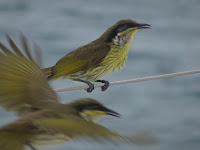 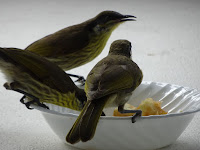 They are beautiful, medium-sized birds with speckled yellow chests. The best thing about them is that they have wonderfully complex whistling songs that just sound like happiness itself. Since their calls are so distinctive, Maryanne and I were quickly able to keep track of their movements on the islands by listening for them. When they would get louder, we would know they were coming in for another snack (we eventually worked out that overripe bananas were their absolute favorite. That's good because it's part of their normal diet). They made sure to always pay for their food with a little harmonized serenade, perching on the lifelines for us like they were lining up on stage. Oh, we are going to miss them when we are gone.