[Kyle]After Magnetic Island, we were up early for the fifty nautical mile sail to Walker Reef. We had plenty of wind (low twenties), and so were able to arrive midday. This gave us the best light for picking our way through the narrowish channel towards a little sandy cay that uncovers at the lowest third of the tide. The charts for the area are terrible and give only a vague idea of what's around, with no depth information. I had chosen Walker by poring over satellite photos of the area. It was the only one around that looked like it would have a sandy shelf on the leeward side that would be shallow enough to anchor. It does not seem to be a tourist hot spot, but it was at the right distance to break up the sail into manageable inbound and outbound legs. 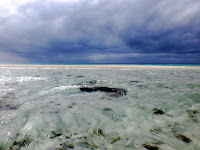 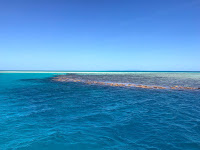 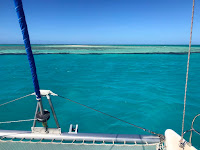 When we arrived, we found that our chosen spot was too small and too deep to allow us to swing at anchor safely. We nixed that plan and instead opted for a large patch of 3-5m sand to the side of the cay. That was okay, but it meant we were not protected by it. The outside of the reef was ½ mile ahead, leaving us in choppier water. It was a gentle rocking at low tide, but at high tide, we were basically in the open sea, which made for some very wild motion.

Our chosen spot was also pretty far from anything interesting, coral-wise. At the next day's low tide, we had a long swim around to all of the bommies within safe range. We didn't know how bad the current would get when it wasn't slack, so we kept it shorter than our usual all-day forays. The coral was few and far between, but seemed otherwise to be in reasonable shape. Fish from a large range were using the structures as a nursery and every bommie was teeming with fry from lots of different species. 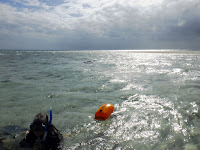 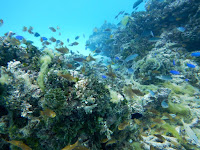 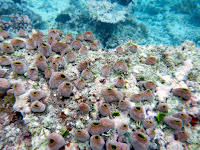 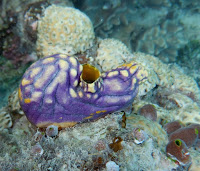 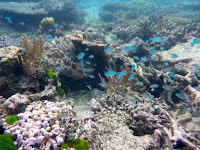 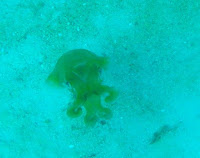 Snorkelling showed large areas of dead coral, but the occasional healthy spot
We saw new (to us) large (purple and yellow) sea squirts
And we returned to the boat to find a squid putting on a show

We saw more sea stars than we have in a while and even found a few big tunicates, which are filter feeders that look like colorful snails with no shells (they are not even in the same phylum. Turnicates, more commonly know as sea squirts, can't even move). On the sand flats, we saw several big Horned Helmets, a type of Conch and one shy Trevally that will soon be bigger than our dinghy.

We were the only vessel there for our entire stay. Our days were divided between gentle low tide and rollicking high tide. At night, we would serve as a welcome resting spot for the odd tern or noddy unwilling or unable to fight their way into the wind. One of the first nights, I went to shoo away a tern, not wanting its droppings all over the deck. It “ran” away from me grudgingly, staying just out of stomping distance. The poor thing was doing everything it could to avoid taking to the air for the night, including holding on for a dunking at the bow pulpit. Okay, I'm sorry. I left it to itself, It quickly scurried to a drier and less windy spot by the base of the mast.

As I was returning to the cockpit, I spotted a noddy flying around, obviously intent on trying to land as well. I started wishing it wouldn't, but after fifty increasingly pathetic tries to land on the bucking boat, I was rooting for the poor creature. It finally managed to capture one of the bungees we use to keep the lazy jacks from banging on the mast in the wind. It hit hard and looked terribly surprised as it boinged back and forth until the oscillation stopped, but it would not let go. Okay, you can stay too. You've both earned it.

{Maryanne: We had arrived in Magnetic Island and were able to connect with the internet again for the first time in a while. We checked in on the latest Covid19 regulations, only to find that the wording had been tightened, and for us to travel any further within Queensland would now definitely be breaking the rules (no more gray areas!). We settled down to make Magnetic Island our home for the foreseeable future. The following day, the rules were updated - everyone can now travel freely within Queensland (with the exception of a few indigenous lands) - YAY - plans change again and off we head north. We can't express how lucky we feel having been 'stuck' in Australia, and Queensland in particular, aboard our boat during the covid19 epidemic.}