Cruising Life in the “Other World”

[Kyle]Since my return to work in earnest at the beginning of December, we’ve developed what I guess could be called our land routine. Our sea routine usually involves planning for the next few days over the horizon, keeping constant watch on the weather and maintaining Footprint so that she will carry us there. Once at anchor, we stay in shape primarily by going for runs or hikes that take us to what is usually the top of the highest point in the area. Well, now Footprint is hauled out 5000 miles from where we are spending most of our time. We’ve had to leave her unattended in the elements and hope that our planning and preparation were sufficient to carry her through the winter. Oban was -6C (18F) the other day.

In the meantime, we’ve settled in quite nicely at Mom’s house in Phoenix. Maryanne and I go running almost every day followed by an hour or so at the gym. It is nice to have a gym that’s so accessible and running routes that are right out the door – no rowing required, no running down a road only to find that it dead-ends in a bog. All of this is, of course, necessary to counteract Mom’s wonderful food, which always continues to taste good well after the required number of calories has been consumed.

I think I have finally managed to get into the routine of work again. This mainly involves getting back into the mindset of putting my personal life out of my mind while I’m there. Even though every third overnight or so allows some free time, for the most part, it’s a 24-hour job. The days are pretty long on average. I’m clear on the other side of the continent staying where the company wants me to stay when they want me to stay there. My uniform is always hung next to the door waiting to be the next thing I wear.

The other thing I have to get used to again is living my personal life in the small doses that a weekend provides and then shifting back into work mode. We’ve had some help from our friends. We took one weekend to visit our good friends Kate and Mark in Norfolk. It rained pretty much the whole time, which gave us the perfect excuse to just stay in most of the time and catch up or have great, long conversations about whatever sprung to mind.

After that, we spent a weekend with JD and Dale in Richmond. Just before I flew in from work, the Blizzard of ’09 hit. Maryanne and I drove to their house in decidedly scary conditions, going about a third of normal speed. This pretty much assured that we would spend the next day in the house with our friends and their kids chatting and enjoying their new Wii. 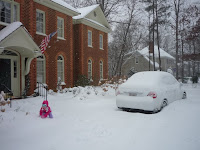 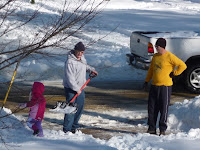 Kyle really did shovel snow, but we never got that on camera!
The next day, with the end of the weekend looming, it became necessary to shovel ourselves out of the wet, heavy snow. I’m pretty sure that I have managed to avoid shoveling a driveway since I was a teenager in Denver. Don’t worry, It comes right back to you. JD has a really big driveway. As I was just going to sleep in preparation for catching the first flight out to work, Maryanne came up and admitted to me that she had locked the rental car keys in the trunk while loading the luggage. I had to get to sleep, but a few hours later, she crawled in bed saying the locksmith had just left and we had our keys back.

The timing of the storm could not have been worse for holiday travel. Thousands of flights across the country were cancelled. For the next week, almost every flight was overbooked with stranded travelers trying to get where they were going. I was actually pretty fortunate since most of the people bumped off flights from Richmond to Newark probably just gave up and drove, leaving a handful of seats left. It was not the same with longer trips. Every airport I went through all week was standing room only. I would constantly overhear conversations people were having about being bumped off one flight or another and being put on standby for yet another flight. Most of them sounded exhausted and completely resigned to spending their day stuck.
Maryanne got to be a part of it herself. After spending fourteen hours in the Richmond airport getting bumped off one flight after the other, she finally got the last seat on the last plane to Cleveland. She spent the night there, got bumped off the flight to Phoenix, and got the last seat to Houston and then the last seat to Phoenix. She arrived 38 hours after getting to the airport and got to see almost as many places as I did.

After a hectic week, a kind Captain picked up my last round trip, which allowed me to get the jump-seat an a jam-packed full flight to Phoenix six hours earlier than I had planned. That flight was looking really horrible and there was a really good chance I wasn’t going to make it home by Christmas. A bonus was that both of the pilots were Captains of mine when I was a shiny new First Officer. We managed to pass the long flight getting caught up with each other.

So I managed to arrive in Phoenix while it was still daylight and I have an extra-long weekend before I have to go back, and earn the money required for our cruising life.
Posted by SV-Footprint at 4:11:00 PM 1 comment: