[Kyle]After thanksgiving and a couple of weeks at Mom’s having fun and …uh…carbo loading, we took a few days to go hiking. 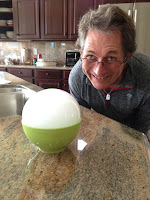 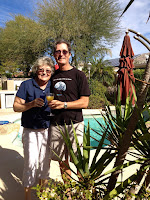 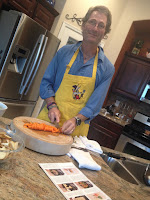 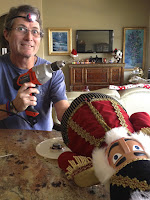 First was a trek to the bottom of the Grand Canyon and back. As the date on our permit approached, so did a cold front. For a while, it was looking like it would be well below 0°C for the entire week, even at the bottom of the canyon, where it’s generally 10°C warmer than the rim. We were on the verge of cancelling, but we as the date approached the forecast continued to get milder and we decided to drive up there and have a look.

On our first day, we cranked up the heat in our hotel room and then put on all of the clothing we brought. The icy air at the bus stop for the hiker’s shuttle actually felt good for a while. When a while was up, we started to wonder if we were really prepared for this.

The shuttle dropped us at the trailhead for the South Kaibab Trail. We checked over each other’s gear and then headed over the rim. It was cold for about a mile, mostly because we kept stopping to be amazed at the view instead of working up a sweat. The trail was protected from the wind in most spots. That, and a general increase in temperature as we lost elevation, had us soon stripping off layers and stuffing them into our packs.

It turned out that December is a pretty good time to hike the Grand Canyon. Almost all of the warnings about making the hike have to do with dealing with summer’s relentless baking heat and the need to stay hydrated. Our hike was cool, but not uncomfortably so, which made it seem not too strenuous at all. There were also a lot fewer people on the trail, which made us feel like we had the whole amazing place to ourselves most of the time.

We overnighted in established campgrounds, which were way nicer than what we got used to on the High Sierra Trail. Bright Angel Campground, down at the Colorado River, even had flush toilets and potable water on tap. 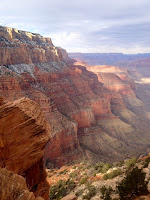 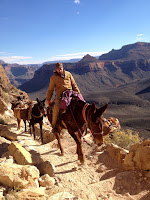 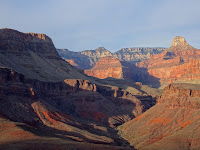 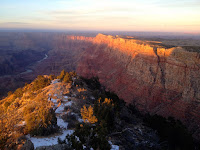 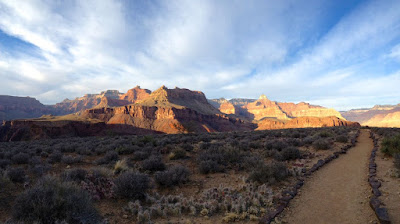 Wow - The Grand Canyon, up close and personal!

At Indian River, on the way back out, we got to spend the afternoon watching helicopters resupply the camp, load by load. As if the scenery weren’t entertainment enough.

The last mile or so before we emerged at the rim on the Bright Angel Trail, the cold returned. We dug out our warm gear and donned it for the trip out amongst the day-trippers.

After leaving the Grand Canyon we took a big detour to Bryce Canyon for a day there. More scenery. LOTS of scenery. 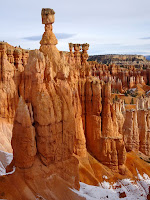 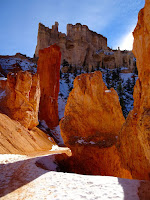 Before returning to Mom’s, we then went to Zion National Park the next day for a hike to their highest thing: Angel’s Landing. It was the weekend by then and Zion was pretty full. Again, we were confronted with all sorts of warnings about the need to pace ourselves on the strenuous trail in the blistering heat. The trail was steep, but in the cool air and without heavy packs, it was a pleasant stroll. The first half of it is even paved.

The second half is a different story. The trail follows a narrow ridge to the top, with long drops to either side. In most places, a heavy chain runs along the single lane trail for support. In a few places, it’s even necessary to pull yourself up or lower yourself down using them. Again, it was good to be there during the off season, as I could imagine there are long waits in the summer for a turn at the chains – all in the heat.

Maryanne skipped the chain part. I basically got to the top with minimal delay for a handful of people descending. The view at the end was worth it, though, totally worth it. 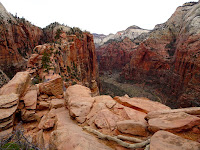 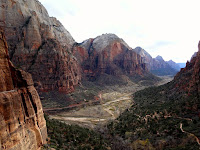 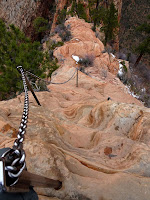 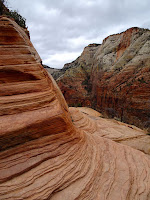 We stayed at Zion until the last of the daylight left, racing around to see as much else as we could before it got dark.

We made it back to Phoenix the next day, our heads full of memories of sublime places. When we got there, we got a message from the yard in Ensenada: Our rudders were done, Begonia was ready to return to the water upon our return, and the bill was less than we feared. Woo, Hoo!