We were on our friend Angie's giant new (to her) boat over dinner Last night and were given a mouthful about the deleterious effect on society that the blog represents. Apparently the blog is an enormous waste of time for the friends of the authors. It was explained to us that blog or no, we still have to go through the same amount of catching up once we call or see each other again. We are still going to tell the whole story including stuff that isn't in the blog so therefore the blog ends up being both redundant and a way to spoil the surprise.

As someone who went into cruising largely because it is a much simpler lifestyle, I can see the point. It is nice to not have the surprise spoiled when you haven't seen someone in a while.

But here's the thing. A lot of people ask what we are up to and it's nice to be able to direct them to one place where everything they want to know is kept and where they can get all caught up. Also, when we're living a life that is a little less pedestrian than the usual " got up in the same house, went to the same job, did the same routine" life, it seems too much like bragging to send people emails saying how much fun and adventure we are having while they're stuck reading it in their cubicle. This way, people can get to it at their own pace and read when it's convenient for them.

As for Angie and the others, we'll just call you from time to time.
Posted by SV-Footprint at 11:07:00 AM 2 comments:

A good reason why...

On hearing I was retiring from work, one of my colleagues sent this perfect quote to me...

"For will anyone dare to tell me that business is more entertaining than fooling among boats? He must have never seen a boat, or never seen an office, who says so."

Robert Louis Stevenson
Posted by SV-Footprint at 7:40:00 AM No comments:

Yay! I handed in my notice from work on Friday. My last day at work is Feb 29th, so just two weeks to go.

I definitely have short timers syndrome.

Work is not such an attractive place to be right now, the company keep making it clear they are making less money than they want, and that jobs must go if this trend does not turn around.

Today 40-50 were "let go" from my office, including quite a few in a different IT group - so it is a quite depressing place to be. Thank GOODNESS I don't have to sweat it out and worry about my job. Although that will not stop me worrying about my friends here. :-(
Posted by SV-Footprint at 4:20:00 PM No comments:

How do we Communicate at Sea? 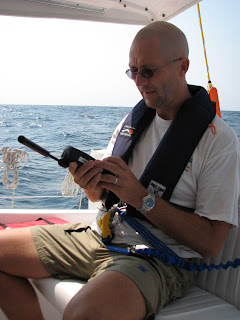 In these days of high-tech communications on land we have multiple options to do anything. However once a boat leaves the main shores, vhf, tv, cell phone signals and wifi hotspots are absent. There are still options to prevent us being totally isolated: we can use either low tech (and expensive) but cranky SSB (single side band - radio) or high tech (expensive) satellite communications. We researched for quite a while, and had hoped to install SSB.

Once we decided what we wanted of our SSB, and had it priced out ($5,000 - $7,000) - we rapidly changed our mind. For now we will use satellite phone minutes (sparingly) when away from land/cell phone signals. Here is Kyle calling home to his mom on a shake down trip off the east coast USA (the Atlantic). This same phone we can hook up to the computer (email, weather, etc), and sometimes it even decides to work!

After 5 years of dreaming, saving, planning and learning, we are finally within real sight of setting off.

Maryanne hands in her notice this week, and finishes work at the end of the month. She then takes a quick month long tour (in March) of friends and family in the UK, while Kyle prepares the boat for a final bottom job! - Ready to set off, weather and schedule permitting in April 2008.