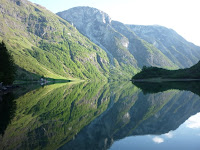 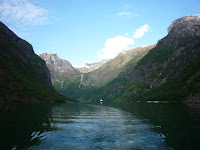 Another day of cruising around on the fjords
[Kyle]Balestrand lies at the mouth of the Esefjord, just below where the Fjærlandsfjord branches off the Sognefjord. On the night we staggered home from Flatbrehhyta, We arrived at Footprint to find another boat moored to the other side of the dock. The owners, Ingolf and Lisbeth, were very nice and came out to greet us. I’m afraid we weren’t the best of company. We were completely knackered and were having a hard time just standing without wincing so we hastily made our apologies and went to bed.

The next day, we slept in a bit and it was a few hours after that before we were feeling human again. We emerged from our cave ready to accept visitors only to find that they were leaving shortly. They told us they were just a few miles away at Balestrand and suggested we come for a visit if we could fit it in. They had seen Norwegian boats in the Caribbean last winter, it got the wheels turning and they were very interested in how we managed to do it.

Well, it turned out that since we had such a fast passage to Norway from Shetland, we actually did have an extra day after Nærøyfjord, so we decided to stop off at Balestrand after all. We had no internet at Bakka but think we managed to get an email out on our super-slow Vodaphone dongle before our balance plummeted to zero on roaming. We had no way to check our email or even verify they got the one we sent but we figured we’d sort it out when we got there.

We tied up to a dock at the town harbor by the busy ferry terminal and found a notice board informing us that the fee was 140kr plus 60kr for showers. 140kr for the dock was a little steep, but 60kr for a shower was pretty outrageous. Maryanne called the harbour master who told her that he’d be right out there…in two and a half hours, leaving us waiting around for him before we could really feel free to go out and do anything. Maryanne prodded a little further and was told we could pay at the tourist office. She walked over there and found a sign reading “back at 2:30”. She went back at 2:30 and found it had been changed to “back at 3:00”. She camped out in front of the place until 3:00. When they opened up, the woman inside said we could pay for showers with her but not dockage, then she said she didn’t have a key for the shower and told us to wait for the harbor master. Maryanne told her the harbor master had said she had a shower key and was eventually given the code for the lock. Jeez, like pulling teeth!

The harbor master never did show up at 4:00, so we gave up on him and his 140kr and went out to look at the picturesque little town, so far the biggest that we have seen in Norway. The main feature of the town, taking up most of the prime real estate on the point with its well kept grounds is the “beautiful” Kviknes Hotel. The majestic hotel, built in 1877, boasts being one of the largest wooden structures in Europe. Maryanne and I always laugh at meaningless and un-provable claims like this. Well, technically, our dock is one of the largest wooden structures in Europe. What are we talking about, here? Top five? Top five thousand? Who’s going to check your facts? As long as you are vague enough, nobody can prove you wrong. Nevertheless, it is very big and it is made out of wood.

I said “beautiful” in the last paragraph, not because it wasn’t beautiful and grand and wonderful, which it most certainly was, but because they have committed what, in my mind, is a mortal sin: They have given in to greed. What they did specifically was build an addition. Now the beautiful and historic Kviknes hotel consists of two wings, euphemistically called “The Historic” and “The Main”. The Historic wing is the beautiful old, grand, wooden part of the hotel with gingerbread gables and views of the gardens and fjord beyond. The Main wing is a giant prefab concrete excrescence of the type that was popular in the ‘70s, containing identical rooms (we could see in) that made Holiday Inn architecture look daring. How any architect could have looked at the landscape of this pretty little village and think it was remotely alright to put such a monstrosity in the middle of it is completely beyond me. 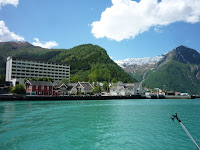 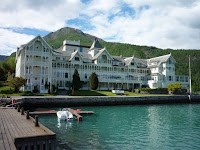 The ugly, and beautiful face of Kviknes Hotel
The Main wing is connected to the Historic via a long hallway that contains a gift shop and a seating area. I am sure this is part of a deliberate plan to carry out a more sinister purpose. I noticed from a tourist brochure showing beautiful Balestrand that has the Kviknes Hotel front and center that the Main wing is situated far enough back to give the illusion that it is a completely unrelated building in the background amongst the cafés and souvenir shops. This would lead someone to think “Uchh! Who would be so heartless to put that ugly thing right in the middle of town right behind that beautiful old hotel? I’ll tell you who. The Kviknes Hotel, that’s who! They did it so they could sell even more rooms, the greedy bastards!

I can imagine that they have many conversations at the end registration that go like this: “Okay sir, you’re in room 715 in the Main wing. The elevators are just down the hall.”

“Uh..the Main wing? That concrete thing? I thought I was in the other part.”

“Oh, no, Sir. Room 715 is in the Main wing, down the hall. You do have full access to our award-winning restaurant and bar and the hotel gift shop. Enjoy your stay.”

“No, wait. I’m pretty sure I booked the, what do you call it? The Historic Wing.”

“Well, do you have anything in the Historic wing?”

“Well, that’s going to be tough, our Historic Wing is usually booked months in advance. Let me see. Hmmm…oh, yes! We do have an inside room on the ground floor I can get you in for an additional 900 Kroner per night. Shall I go ahead and put that in for you, Sir?”

We have a lot of conversations like that as Flight Crew when hotels try to put us in unrenovated rooms that no discerning customer would pay for.

Anyway, we did enjoy a nice walk around the unblighted part of town and even splashed out after dinner aboard for dessert and coffee at a café run by a nice man whose English was so good that we originally though he was an ex-pat from Newcastle.

Returning to the boat in the low orange light of near-sunset I was quite pleased to notice that one of the mature trees at the park adjacent Footprint perfectly blocks out the Main wing.

We never did see Ingolf and Lisbeth. We called them once we had cell phone service and found they had both left the country, not even to the same country. Talk about scattering the crowd. Anyway, Balestrand is a beautiful town and we are glad to have made the unplanned stop. 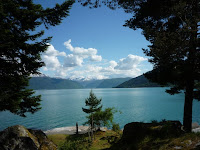 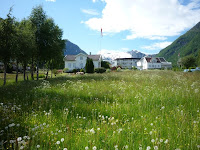 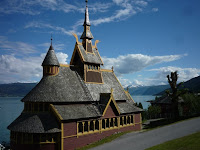 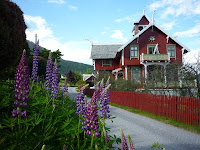 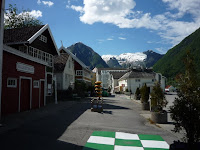 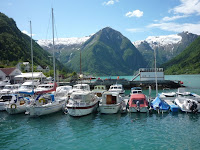 Scenes from picturesque Balestrand, with its (modern) stave church and Norwegian-style gingerbread houses
[Maryanne]Balestrand is one the resort towns on the Sognefjord, and it is really uplifting just to walk around, or hang out and have a cake anywhere in the town. It is a key orchard region for the area, and most houses seem to have gardens big enough to accommodate a handful of apple trees too. There is even a cider house that we didn't get to see. I've totally fallen in love with Norway (at least Norway in the summer).

Oh, and just to be fair, we did indeed pay the harbourmaster his dues :-)
Posted by SV-Footprint at 4:17:00 AM

I love your outrage at the ugly modern addition to the hotel!