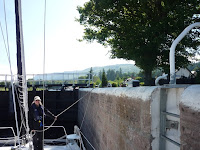 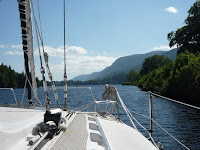 Back in the Locks and Lochs of the Caledonian Canal

[Kyle]After another night of only a couple hours of sleep (I’m sleeping less on vacation than I do at work). We got up early in order to enter the sea lock right at opening time. We had to because we were blocking the entrance to the lock and the tide would soon be too low to operate the lock and let us through.

We locked into the canal, paid our fees and tied up at the marina so that we could head off to the grocery store. We had deliberately stocked up before heading to Norway and now were running pretty low on a few things {Maryanne: It was also going to be a LONG time before we passed a good-sized supermarket again}. One thing led to another in there and we ended up buying about 200 pounds of groceries, coincidentally for about £200. I am sooo glad we have our little portable hand trucks for just such an occasion.

We got everything stowed and were soon ready to head up the canal. I called the bridge tender to ask about going through and was told the bridge was out of order for the foreseeable future. They didn’t even have an estimate for an opening time. The real killer is that it just happened. The fishing boat we had gone through the sea lock with had gone straight through and ended up being the last one before they discovered the bridge was broken.

I was devastated. We didn’t have either the time or a good forecast to go all the way around the top of Scotland. It was a Saturday just before lunch and, by all accounts, it looked like this was one of those things that needed it to be Monday before they could even order the part. My mind raced with contingency plans. My ambitious but not too unreasonable push southwards would need to became an awful marathon of long days and 24 hour-a -day sailing to make up for the loss. The other killer was that it was shaping up to be a really nice day. The sun was coming out and the wind was perfect for a downwind sail across Loch Ness. The forecast for the next couple of days was rain and headwinds. We were missing our chance.

Maryanne called the bridge tender on the radio after lunch. He said they found the problem and would be attempting an opening in the next few minutes. If it was successful, we could go through right after that. Well, we both stood on deck with bated breath watching for any signs of movement of the bridge. It opened, and then closed about halfway and stopped. Damn! Workmen in orange jumpsuits started crawling all over the place and after e few minutes more, the bridge shut and there was more crawling. This did not look good.

It wasn’t that bad. They called us a couple of minutes later and said we could go through. It turned out somebody had vandalized the bridge in some way that made it look like the problem was much more serious than it was. Once they figured out what was really wrong, it was a quick fix. We found out all of this as we were motoring through and never managed to get to what actually happened before we were out of earshot.

Next was the Muirtown flight. As it was Saturday, there were a lot of onlookers stopping by and asking questions. We talked with two American women for a few minutes before Maryanne acknowledged she recognized one (especially her voice). Since we don't have a television, Maryanne reads A LOT, but she also tries to catch her favorite lecture series on line when she has a decent internet signal (www.TED.com). One such lecture that she'd sent me recently and INSISTED I watch was by Jill Bolte Taylor. Jill is a leading American brain scientist that had the bad/good fortune to suffer a stroke, while being aware enough to understand the amazing impact the stroke event was having on her awareness of self and the world at large. She'd given a very emotional testimony on TED and is now a strong voice in the field of stroke recovery. Maryanne had been impressed with the strong emotions and the effort of reliving of such an experience. It was indeed Jill and her manager standing before us today - invited to the UK to give a talk to the National Health Service - asking about OUR lives. What a world!

If you are interested in seeing that same talk - here it is.


We got through the last bridge on the Inverness side of Loch Ness before the keeper went home for the night. This gave us the entire length of Loch Ness to sail before we came to the next lock at Port Augustus. It was marvelous! I would say it was pretty much the opposite of our last trip through Loch Ness going the other way. Instead of a freezing beat to windward in low cloud and rain, we unrolled the screacher and slid dead-downwind on a clear, warm sunny day. We could see the mountaintops this time! It was calmer on board that it is in most marinas and we were the only boat on the entire Loch. We made it to the other end at Port Augustus right as the sun was setting at 10pm. The light was beautiful on the hills. 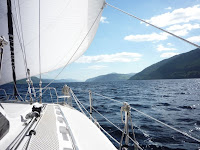 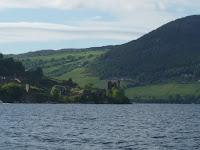 Loch Ness
It had been a really long day and we were well overdue for a long night’s sleep.
Posted by SV-Footprint at 3:54:00 PM

So---are you disappointed in Scotland after spending time in Norway, as you feared? Glad you made it through and it's so good to be in touch again. Missing you.