[Kyle]At Ballachulish, we woke to a world that had been drained of all color. Thick, heavy, drizzly clouds had moved in overnight. The cups on our anemometer stood motionless and the Footprint felt as if she were resting on concrete.

We pulled up the anchor and began motoring over the glassy water. The autopilot steered. Occasional drizzle covered the windows and the outside of the cockpit enclosure. We could see well enough to avoid hitting things, but not enough to enjoy the gray view. Venturing on deck into the cold drizzle wasn’t any fun. We spent all of our time just sitting there, waiting for the big excitement of the next turn. In a word, it was byoorun’ {Maryanne – let me translate for Kyle, that’s his current pronunciation of “boring”}.

Well, except for one thing. We did get to see some of the competitors for the Three Peaks Yacht race on their way to Fort William. In this race, runners climb the three highest peaks in Britain: Mt. Snowdon in Wales, that one in England {Scafell Pike} and Ben Nevis in Scotland. Between peaks, they sail. The finish line is at the Corpach sea lock at the end of the last run. The race is done by total time, so the faster they sail, the slower they have to run and vice versa. 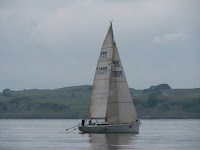 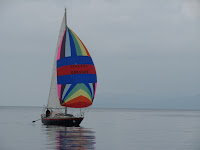 Flat calm seas, not so good for a race so they break out the oars as well as the light wind sails
Ft. William had been in a flurry of preparation for their arrival the day before we left. We were told we would have to wait for the first group to lock up at the sea lock before we could lock down. The fleet had been beset by headwinds, calms and foul tides and were nowhere in sight the day we left the canal. It wasn’t until a day and a half later that we started seeing them near Oban. They were still at that point a day from Fort William.

As we motored down the Lynn of Lorn, we spotted a handful of spinnakers with barely enough wind in them to keep them filled. Each boat also had long oars set up with a person on each that they were using to help. The lead boat, in addition to its pair of oars, had jury-rigged a second set. I plotted them on radar and it looked like they were making about three knots. Ft William was still 35 miles away and the tide was about to turn on them.

We honked the horn and went on deck to cheer and yell encouragement as we passed each boat. We got back exhausted waves from crews who were clearly ready for the whole thing to be over. I imagine the last two or three nights of being frustrated by fluky winds was also wearing on them.

We arrived at Cuan Sound (of the world’s biggest mooring ball. See August 2009) an hour or so after the current began to shift. We crawled into the sound against a strong, whirling current and anchored in a nice, wide spot in the pretty bay.
Posted by SV-Footprint at 12:05:00 PM

This sounds like a race you would participate in, Kyle. Grueling. Amost inhuman endurance required, miserable conditions--just your cup of tea, isn't it?